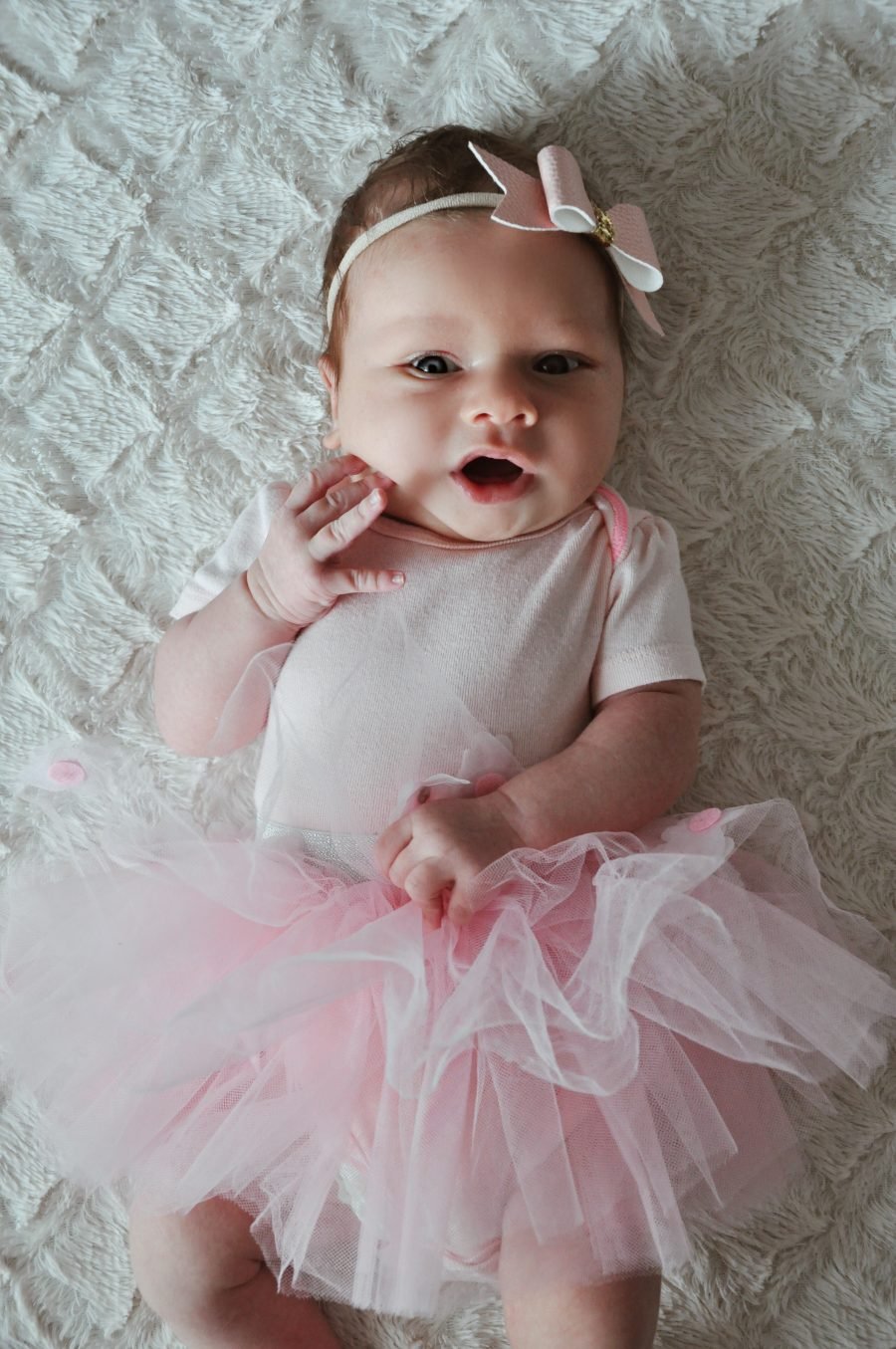 Our sweet Mila is one month young today.

Just typing out those words fills this already hormonal mama with all sorts of mixed emotions. I feel overwhelming joy because she has brought so much happiness into our lives. I also feel a tiny bit sad because my little baby is growing so quickly!

Although, let’s face it. Mila was never truly “little” by any definition of the word. Case in point: When I breastfeed her, her long legs hang off my cradled arms and are planted firmly on the bed. 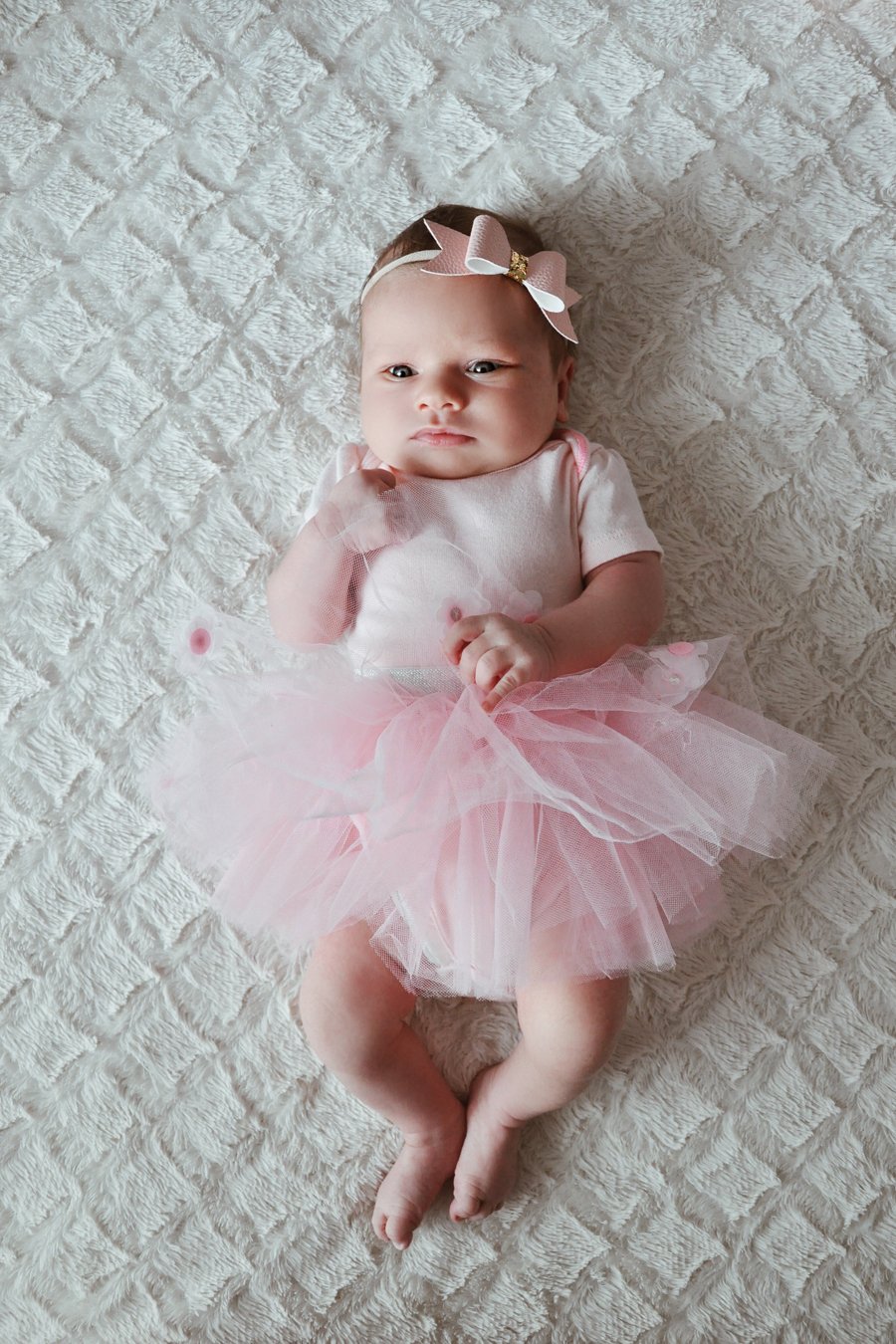 Mila’s first three weeks were total bliss for mommy and daddy. She slept round the clock, nursed oh-so-effortlessly at fairly consistent intervals, rarely cried and was overall the sweetest, calmest baby, like, ever. Part of me was like, “My child is an angel; I want six more!” while a less optimistic, more realistic part of me was like, “Just you wait…your time will come.”

Week four arrived, and little lady developed a personality. That – or she suddenly wisened up and realized there’s more to life than napping. Her curiosity at the world around her is fascinating to witness.

I’ve read babies go through a growth spurt around 1 month, which would explain some of her more recent, less-than-stellar behavior. Yet I also read that they go through a growth spurt practically every week, so that’s not much consolation. The most frustrating part of mothering a newborn, I’d say, is my need for stability and routine being in constant battle with Mila’s complete lack of it. So I’ve set my mind to take things one day at a time, fully recognizing that she won’t be this little for long, and there will come a day when we’ll miss this stage – this sweet but confusing “yesterday I liked naps, but today I’m a new woman” stage.

Overall though, we’ve had far more good days than bad, so I think we’ll keep her. 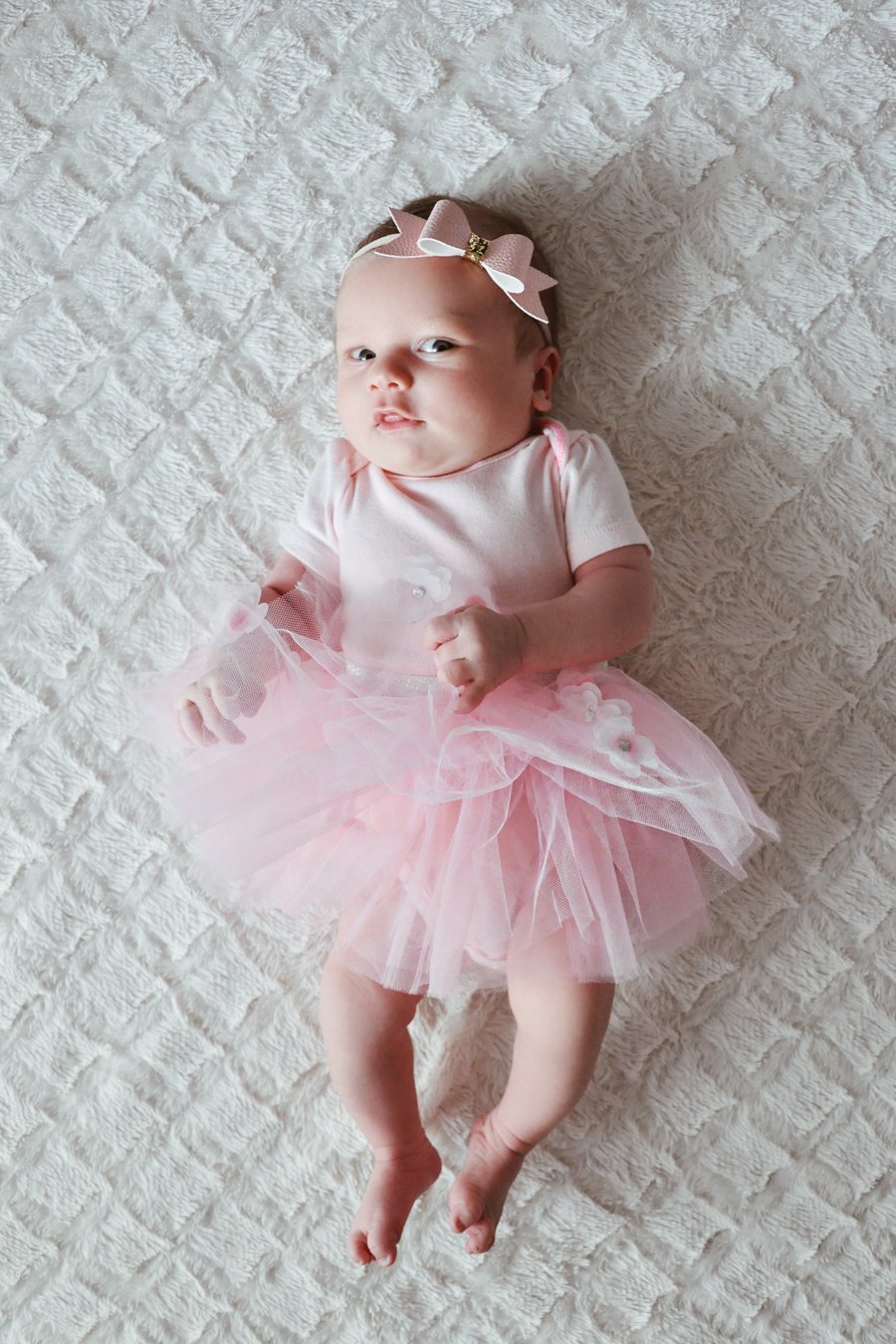 At night Mila sleeps really well – with her longest uninterrupted stretch to-date being a whopping six hours. Usually, though, it’s more like 4-5 hours in the beginning of the night, then waking up every 2-3 hours afterwards. During the day, however, she’s developed a tendency to nap for no longer than 30-45 minutes. Although, as I sit here typing this post, she’s on her second two-hour nap of the day, so go figure. Maybe, just maybe she’s back to her sweet ol’ self. We’ve just recently added blackout curtains and a white noise machine to her nap time routine, so that, too, could be helping keep her asleep longer.

Even during the most difficult days, there are times I can nurse her, put her down in her bassinet and leave the room – and she falls asleep on her own. Talk about the perfect child!

Mila is happiest and most alert in the mornings; that’s when she gives mama the sweetest coos, toothless smiles and cutest giggles. However, there’s no one she loves smiling more at than her daddy – no matter the time of day! Those two are totally smitten with each other. 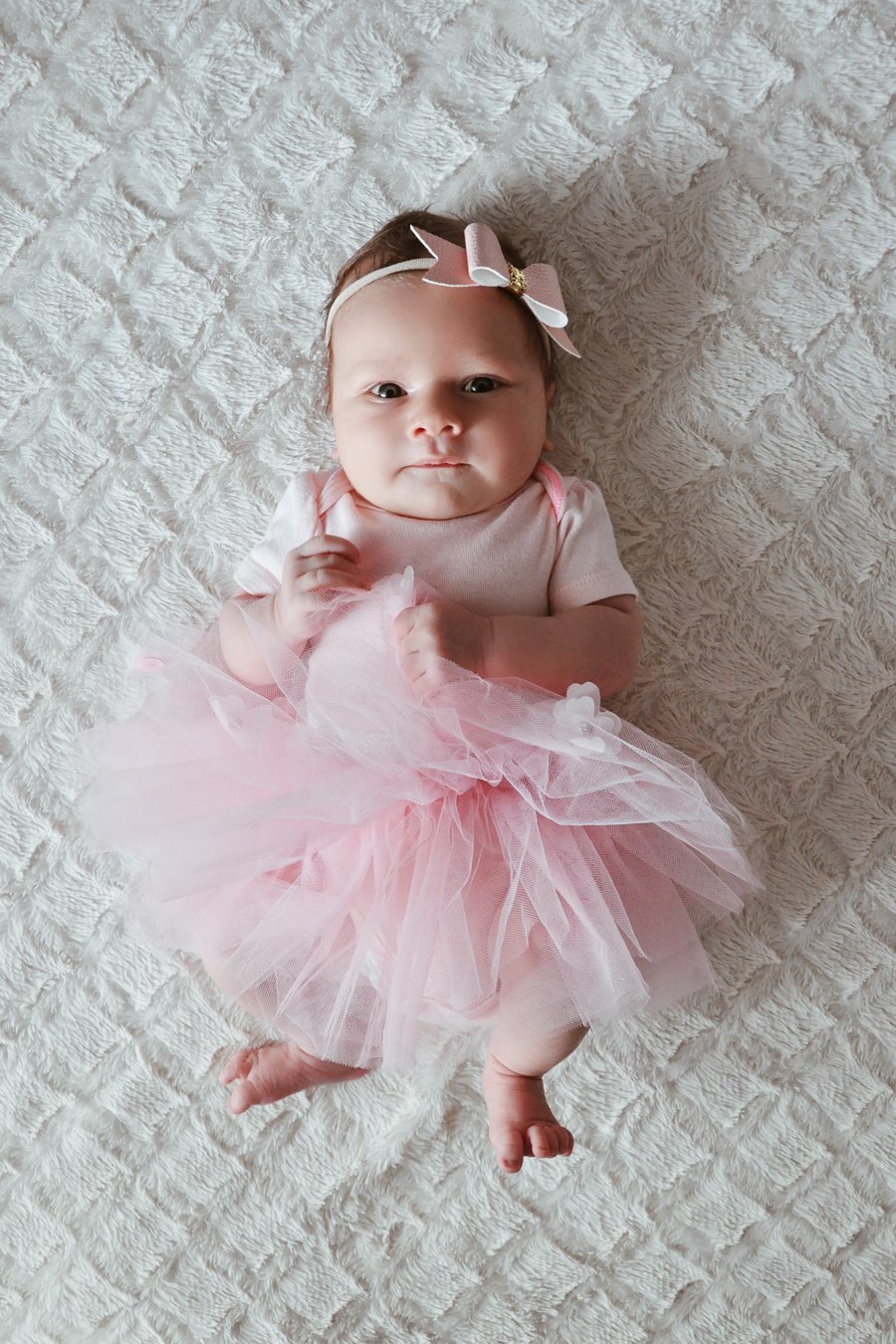 As evidenced by her sweet, yummy cheeks, our girl sure loves to eat. That’s no surprise; she is her mother’s daughter, after all. These days we’re dealing with eating too much, too often and hurling everything out on mama and the newly washed bed linens afterwards. It’s a load of fun, let me tell you. I’ve taken to walking around the house naked to minimize my already-daily laundry loads. Ironically, the minute the vomiting fest is over, she’s rooting again, like “Did you seriously think I was done eating?! Ha! Joke’s on you, lady.” I love watching her face after she’s eaten, though; she makes the funniest faces when she’s in a milk coma – so cute, in fact, that my phone is already out of memory from the hundreds of videos I’ve recorded of her.

Mila is almost 13 pounds already and looks and acts much older than her age. Her neck may be covered by rolls of squishy baby fat, but it is quite strong. She’s been able to hold her head up since the day she was born and is even starting to attempt rolling herself over.

Despite a few not-so-successful tries in the beginning, Mila loves bath time and cries big, fat tears when we take her out of the water. She also loves being swaddled, loves when mama massages her legs during diaper changes, loves being snug as a bug in her carseat and bumping along in the car, as well as long strolls in the park.

One thing she doesn’t like, though, is her Boba wrap. Oh, and then there’s the paci. I was hoping it would help her self-soothe during naps, but there’s no fooling her with a rubber nipple. We also haven’t tried giving her a bottle, but I have a feeling she may not be a fan of that either. We’ll cross that bridge when we get to it, though.

In the meantime I’ll be soaking up her newness and warm snuggles and the sweet way she coos “Aaaaaah” – after she unloads into a diaper that mama put on her all of five seconds ago. It’s hilarious, really. She has the best comedic timing. 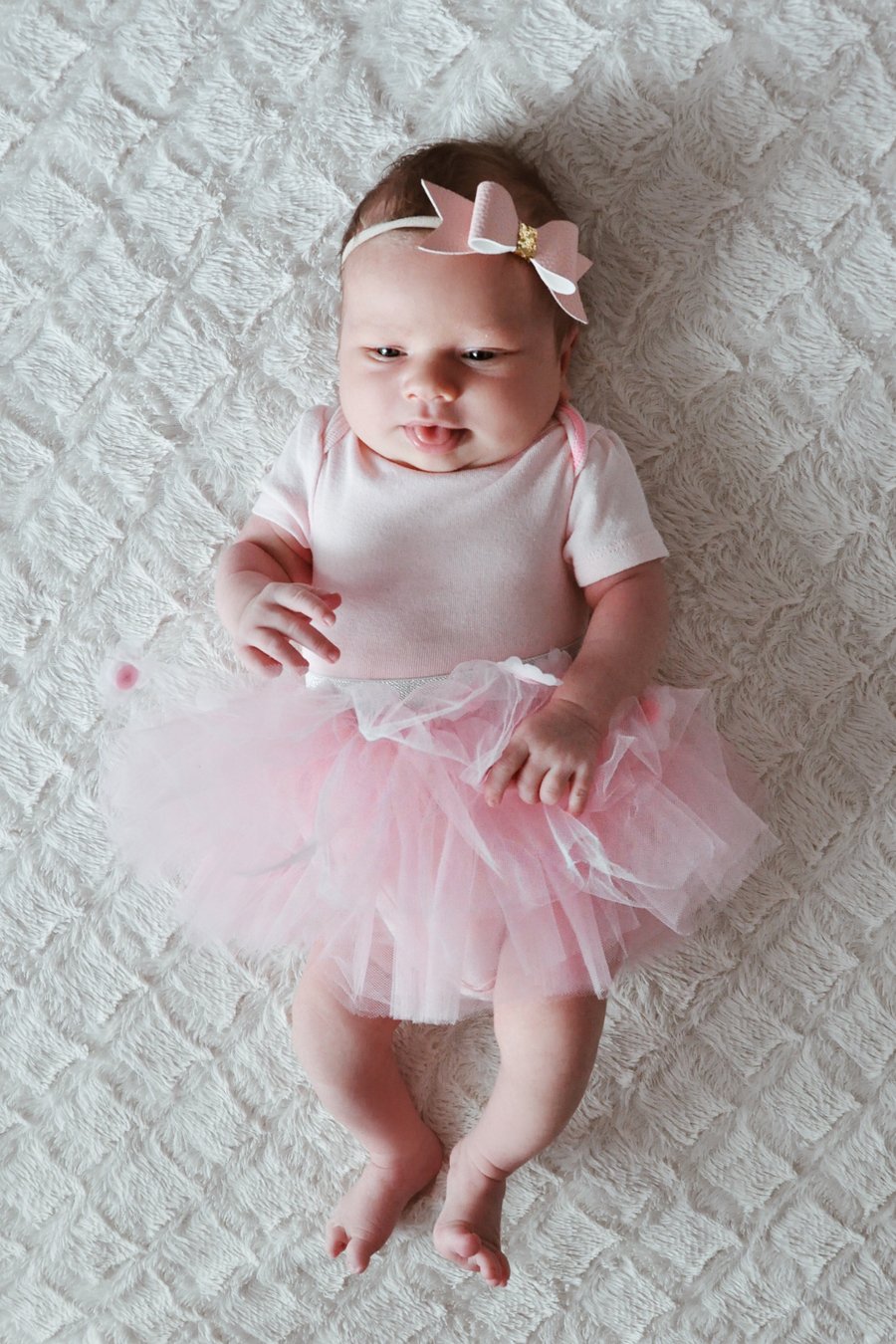 If you missed Mila’s birth story, you can catch up here. If you’d like to see her oh-so-cute nursery, you can tour it here. Otherwise, feel free to peruse all other “Motherhood” articles.