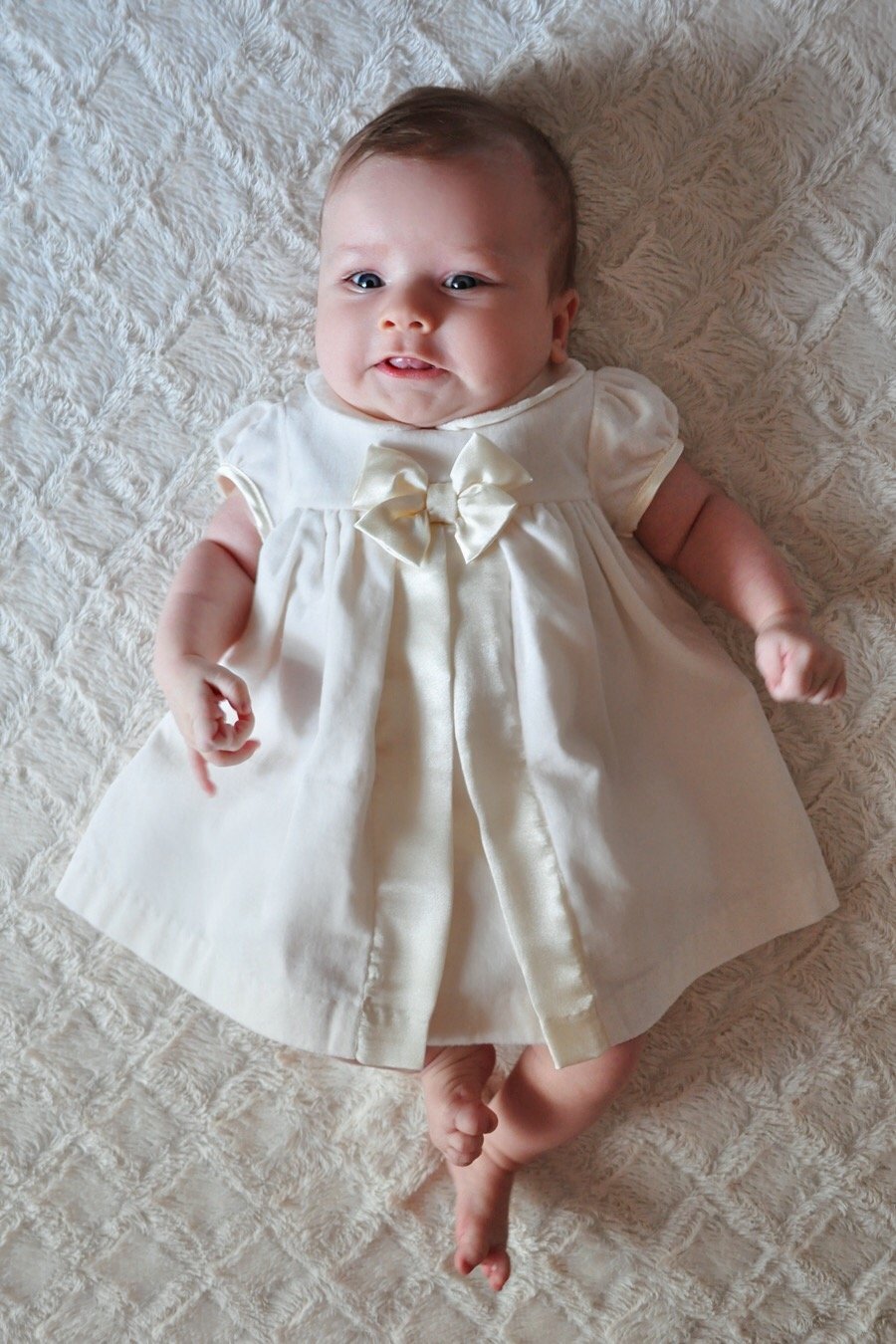 I’ll spare you the cliche saga of what it’s like watching your infant grow and mature by the hour. Talk about bittersweet!

Mila’s biggest development over the last month is in the sleeping department – specifically, how we put her to sleep. She rarely stays awake for longer than an hour at a time, and when that hour is up (I can always tell because she starts fussing, yawning and rubbing her eyes), all I have to do is swaddle her, offer the paci, and she drifts off into dreamland.

Some days she’ll only nap for 30 minutes, others – for three hours, so I can’t complain.

We did encounter a few difficult days around week 7. Was it another growth spurt? Who knows… She outright refused to nap or be consoled. Hopefully that’s all behind us, and she’s back to her happy self – until you put a bonnet on her and attempt to take photos, as evidenced below. 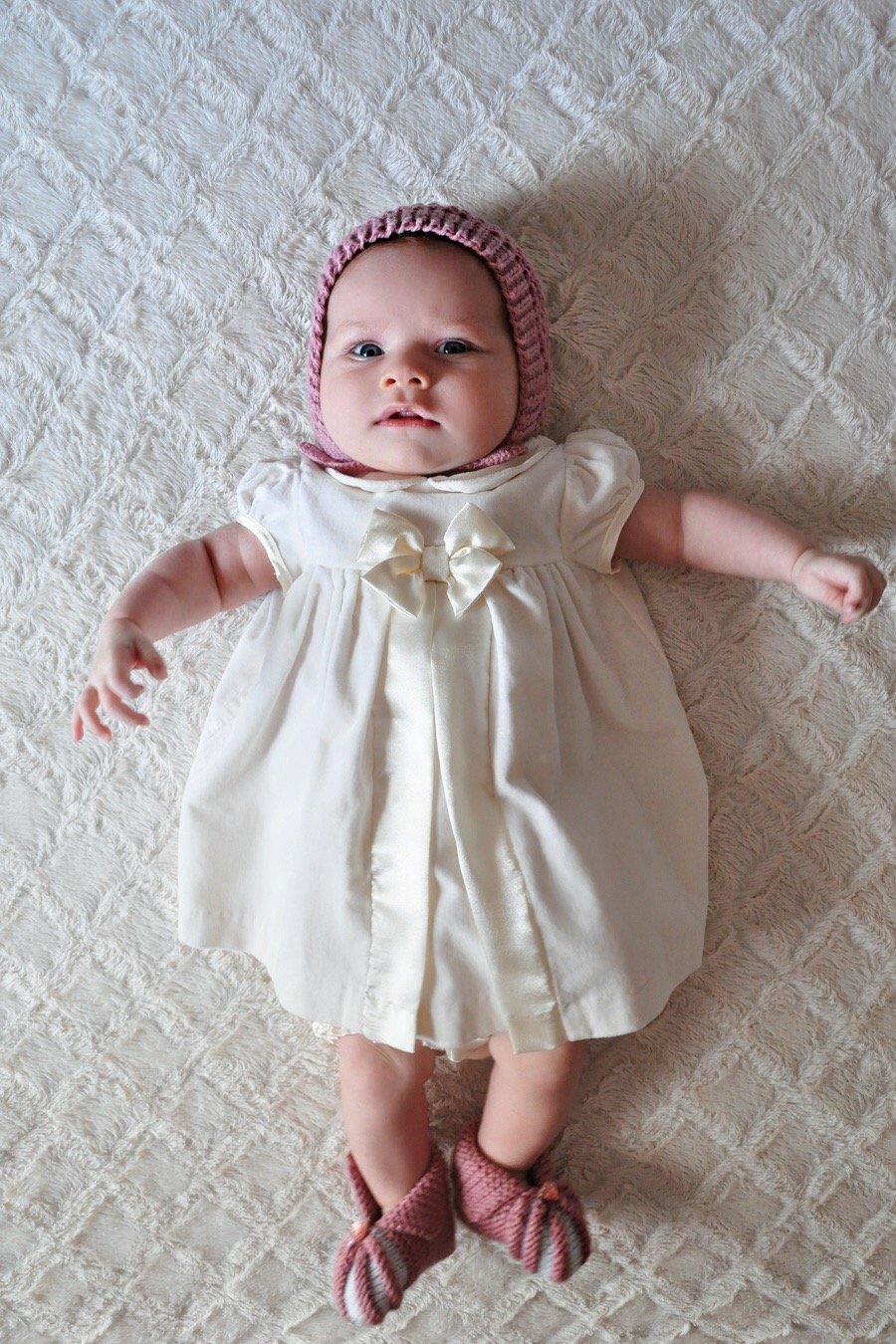 As far as sleeping at night, she gave us several impressive 7.5-hour stretches but is now back to her usual 5-hour stretches of uninterrupted, blissful snoozing. I had a cold for about a week, and I think that messed up her schedule a bit because she got used to eating more often. (They say to nurse your baby as often as possible when you have a cold).

Mila also hates being woken up and hates the process of waking up, too – much liker her mama. Most mornings, she will start to stir and whimper – even cry – in her sleep until I hold her upright. After that, her eyes pop open, and it’s all smiles and giggles from then on. 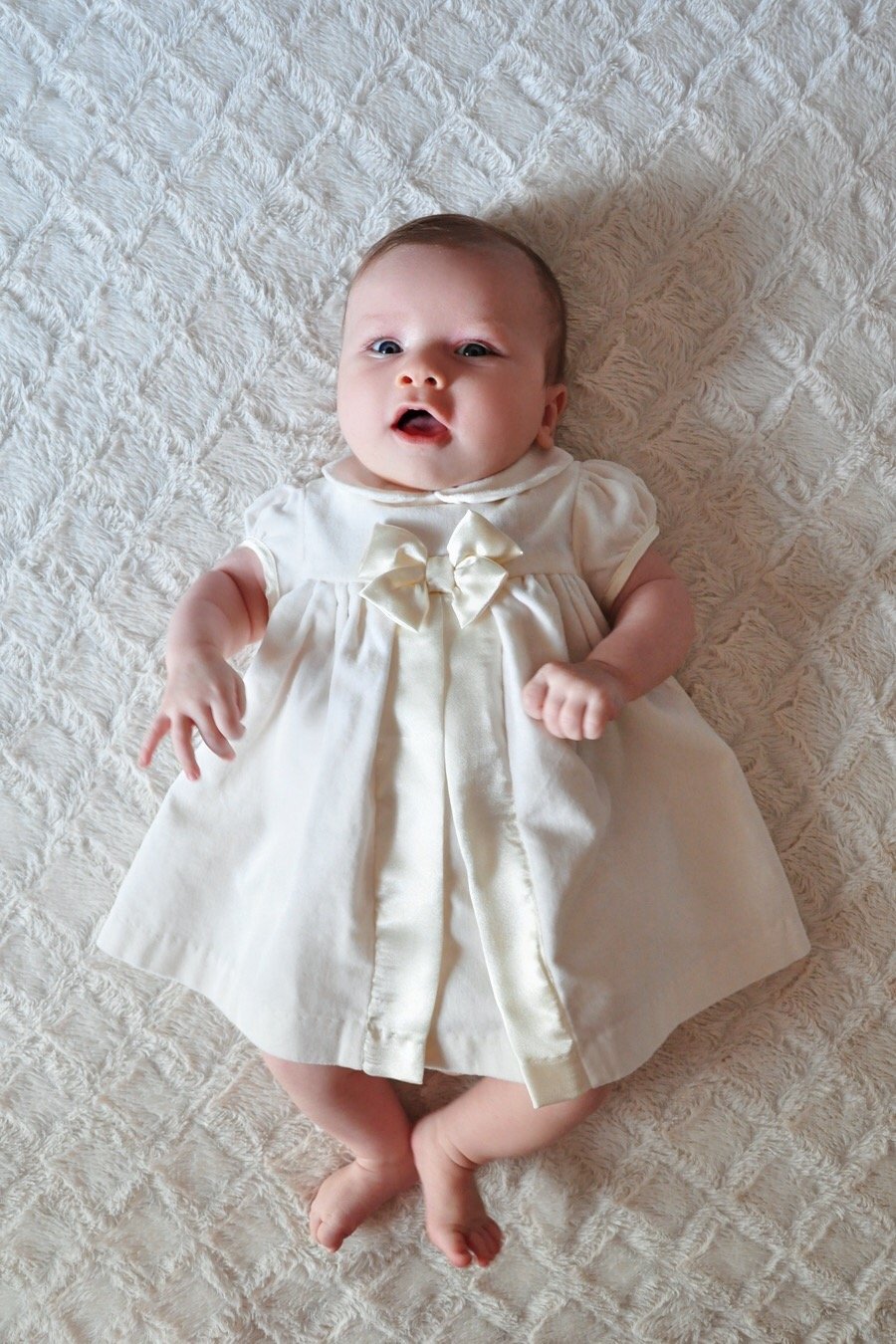 The first part of this month, she set her bedtime around 8PM, but it has since gotten later and later. Now, we’re lucky if she’ll turn in for the night by 10PM. I’m sure the daytime napping has a lot to do with it, so again, I can’t complain. But there are those blissful – although rare – days where she’ll go down around 8PM, and we have a nice, slow evening to relax and watch a movie (or in my case, watch the baby monitor because I’m an obsessive first-time mom).

Speaking of the baby monitor, one day we sat down to eat lunch with the monitor right in front of us so I could keep watch while she naps. We said grace, and the minute we pick up our forks, she lets out the biggest fart I have ever heard. Her comedic timing is better than ever.

On a more serious note, because of the baby monitor, I was surprised to discover just how much time she spends awake in her bassinet – just laying there, cooing to herself. 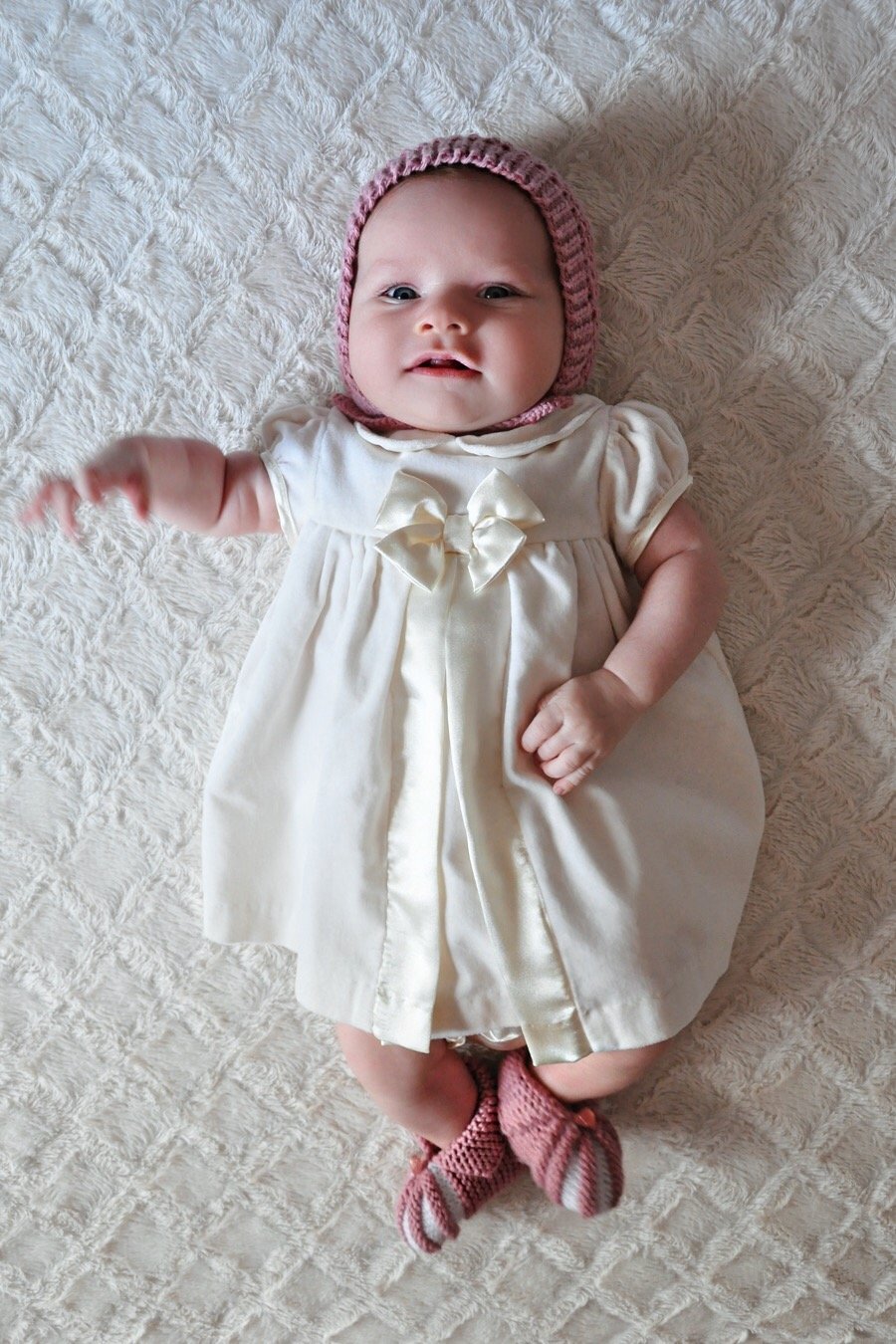 Mila still loves to be swaddled and will not go to sleep until she’s tightly wrapped. If her arms happen to escape, she’ll fold her hands oh-so-neatly directly under her chin. It’s the most precious sight ever. Bath time is still a favorite; she’s starting to kick her legs in the water the more interactive she becomes.

Our Mila is girl is more than ever obsessed with her daddy. It doesn’t matter the time of day, whether she just woke up or is already fussy and ready for sleep – the second she hears her daddy’s voice or sees his face, she breaks out into the biggest smile. I’m not bitterly jealous or anything…but come on!

She also loves holding daddy’s hand, or rather finger, especially when I’m changing her diaper. She’ll just lay there, cooing sweetly to him, her tiny hand wrapped around his finger. I melt every time. 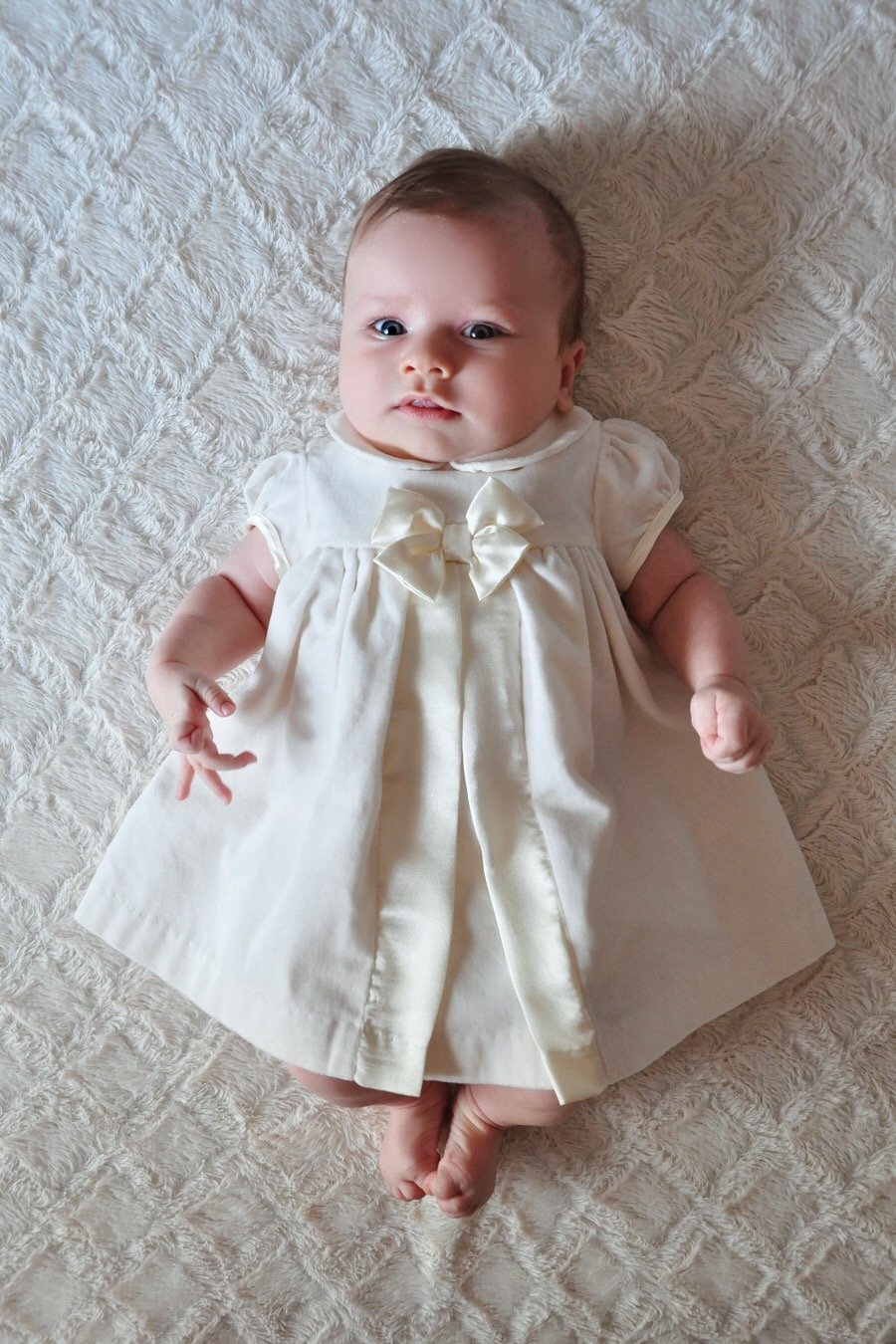 Every morning I put her on my legs, and we play, and she laughs, and my heart bursts into a million little pieces. She’s so interactive for such a little babe. One day I asked her to say “hello” to daddy in a video, and she let out the sweetest “Ahhh…” She’s even attempting to make noises other than “Ah” – moving her little lips like she sees mommy and daddy do. She even let out a “ma” once – at which point I nearly exploded with happiness. I could talk baby talk with her for hours (and sometimes do!).

She’s also learned the lip quiver – and she knows exactly how to use it. When something doesn’t go her way, you immediately see a frown, then her little lip starts to shake and before long the most heart-wrenching wail escapes. It’s quite dramatic. I don’t know who she gets that from…

Although she still struggles keeping her paci in her mouth, I’m happy to report that she’s not nearly as dependent on it as I feared and can sometimes fall asleep without it – which is nice, because running to her bassinet every 10 minutes is giving me a daily workout! She also started sucking on her little fists and loves blowing spit bubbles and drooling all over my shoulder. The pediatrician says it’s not teeth just yet, but that her salivary glands start working around two months; hence, copious amounts of drool.

Mila is now 13 pounds and 12 ounces and measuring at a whopping 24.5 inches long. Because of her height, she no longer fits in some 0-3 clothes, but we’re still using size 1 diapers. 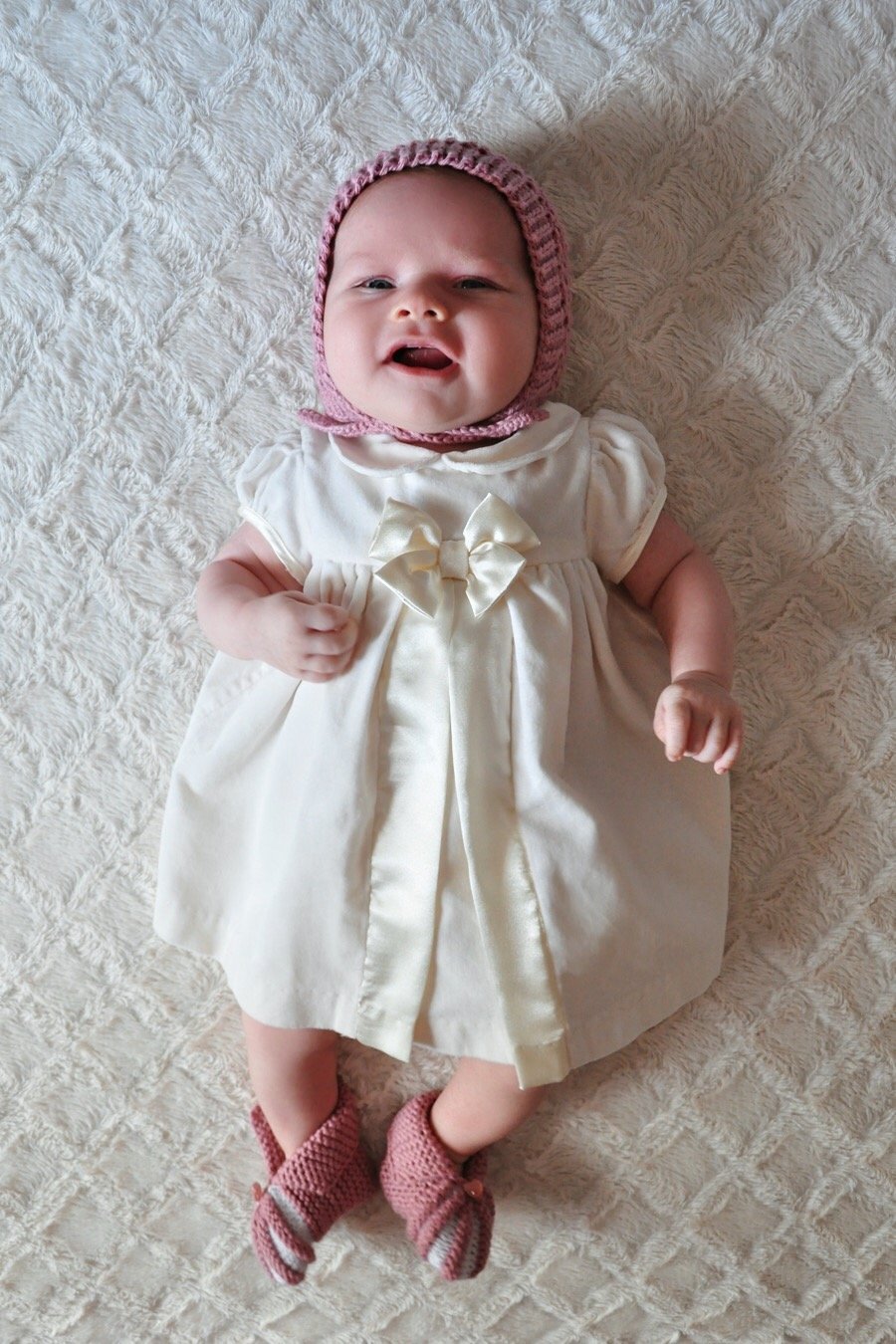 See Mila’s 1-month update here. If you missed Mila’s birth story, you can catch up here. If you’d like to see her oh-so-cute nursery, you can tour it here. Otherwise, feel free to peruse all other “Motherhood” articles.