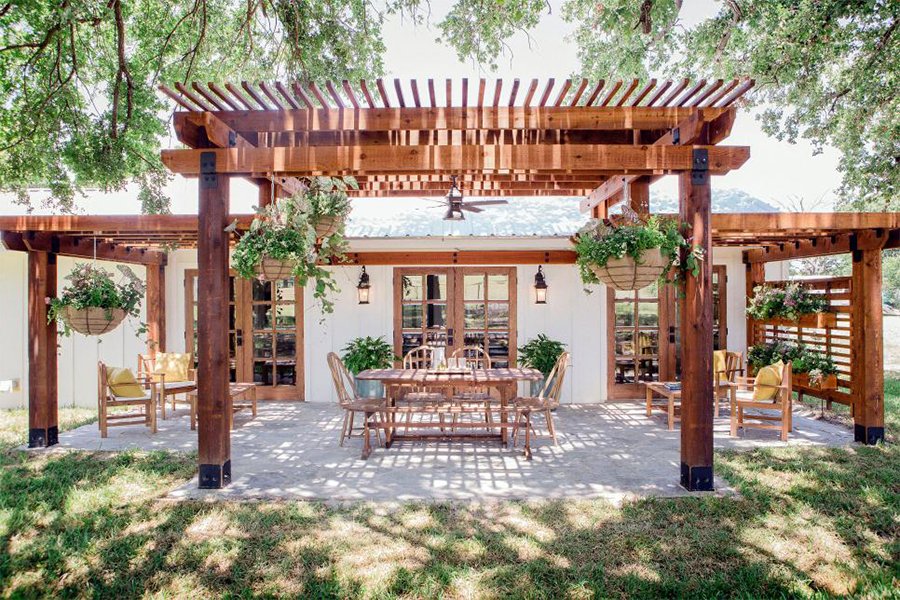 Hard to believe, but come July, we will have owned our little bungalow for two years. Not lived in, mind you, but owned – as we only moved in September of last year.

July is shaping up to be quite the month, what with the milestone above and the arrival of our baby...

We've been so busy making the inside of the house livable that the outside has fallen by the wayside. But we're making progress! Currently, we're in the midst of two projects: a little porch over the front door and a not-so-little side deck.

If you've been following on Insta stories, you already know how excited I am about the prospect of alfresco dining.

When we first replaced the tiny window with French doors in what is now the dining room, I dreamed of expanding said dining room outdoors with a large outdoor living area complete with a pergola, sitting area, grilling area, dining area, possibly even a fire pit – the whole shebang, basically.

Now, those plans are finally coming to fruition one tiny step at a time. Thankfully, we hired these projects out – I can't imagine trying to DIY a deck, pergola and front porch while simultaneously designing the nursery and being seven months pregnant. With the onset of my third trimester, merely typing out those projects makes me want to take a long nap.

Speaking of pregnancy, I'm crossing my fingers that both projects are finished in time for my baby shower at the beginning of June.

With any large project we tackle, I find it necessary to make some initial sketches – whether it be in a computer program or on plain paper. The plans inevitably change – and that's totally okay. But narrowing down our many, many wants and needs into actual plans before diving in helps all parties involved, because it gives everyone a clear direction. I mostly use floorplanner.com for such projects or mock them up in Photoshop.

Stay tuned for photos of the finished, styled deck coming in the next few weeks. In the meantime, I'll be sharing the behind-the-scenes process. I'm also hoping you'll help me answer some important questions – like what color to paint the pergola and which stain to choose for the deck.

If you’re unfamiliar, a pergola is an outdoor architectural feature used to define an outdoor space. It can be attached to the house or freestanding, and it consists of support posts and criss-crossed beams that form an open roof.

I've adored pergolas as long as I can remember; there's something so "Mediterranean villa" about them – and you know how I feel about about the Mediterranean... But it wasn't until an evening at a local Italian restaurant called Tony's Pasta Shop & Trattoria (highly recommend if you're in the Chattanooga area!) that I realized we could easily have one built on our own deck.

To add to my excitement, we recently discovered a gigantic climbing rose bush on our property (it's huge!). I fully intend to replant part of it around the pergola columns and watch it take over the entire pergola. If any of you have tips on replanting climbing roses, I'm all ears!

Otherwise, let's look at a few dreamy pergola ideas I've used as inspiration for ours. 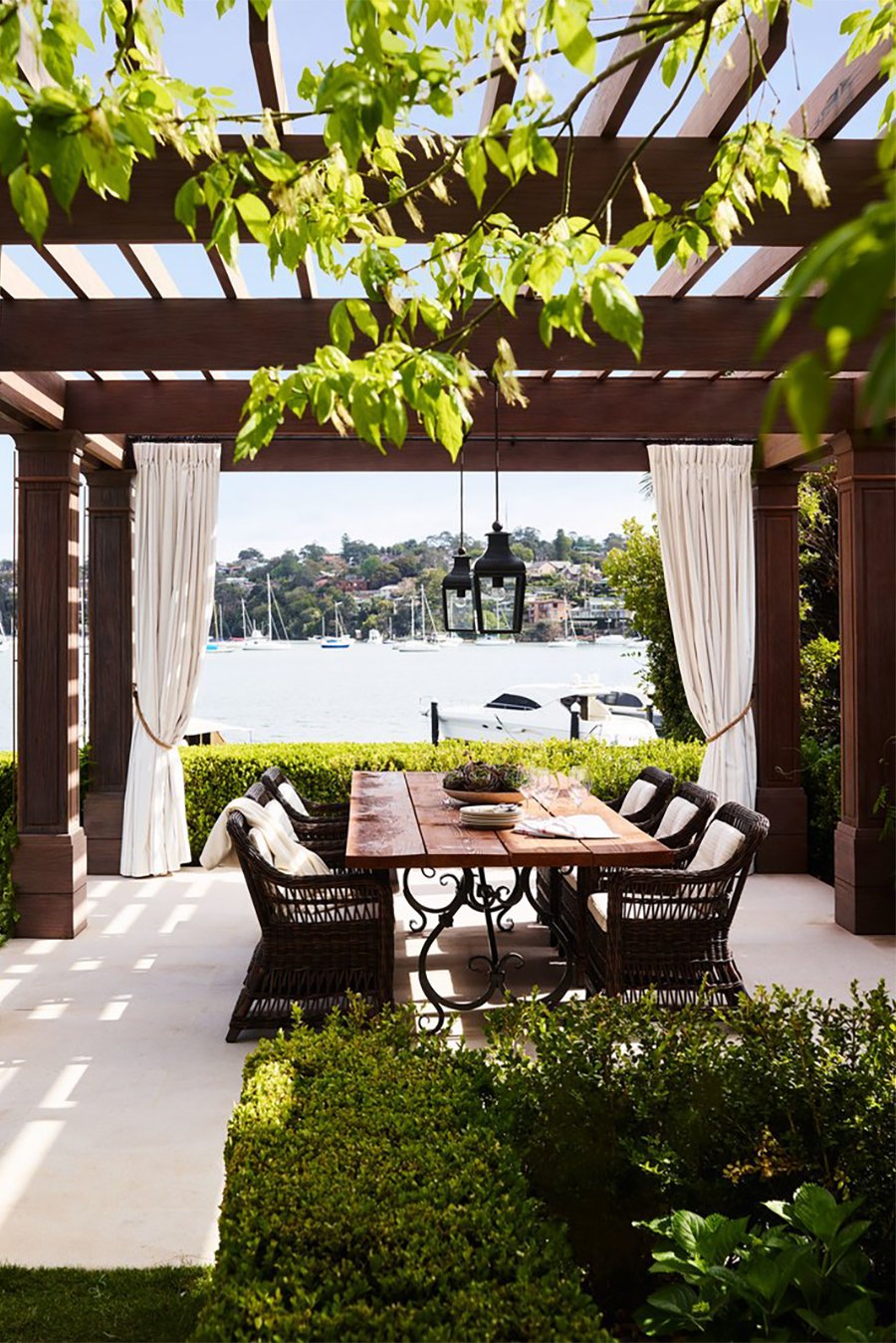 Granted, not every pergola can have a stunning view of the harbor. But my favorite features here are far more simple. The curtains add a dose of privacy, while the neatly trimmed hedge creates a sense of space. Both elements can easily be recreated in any setting. 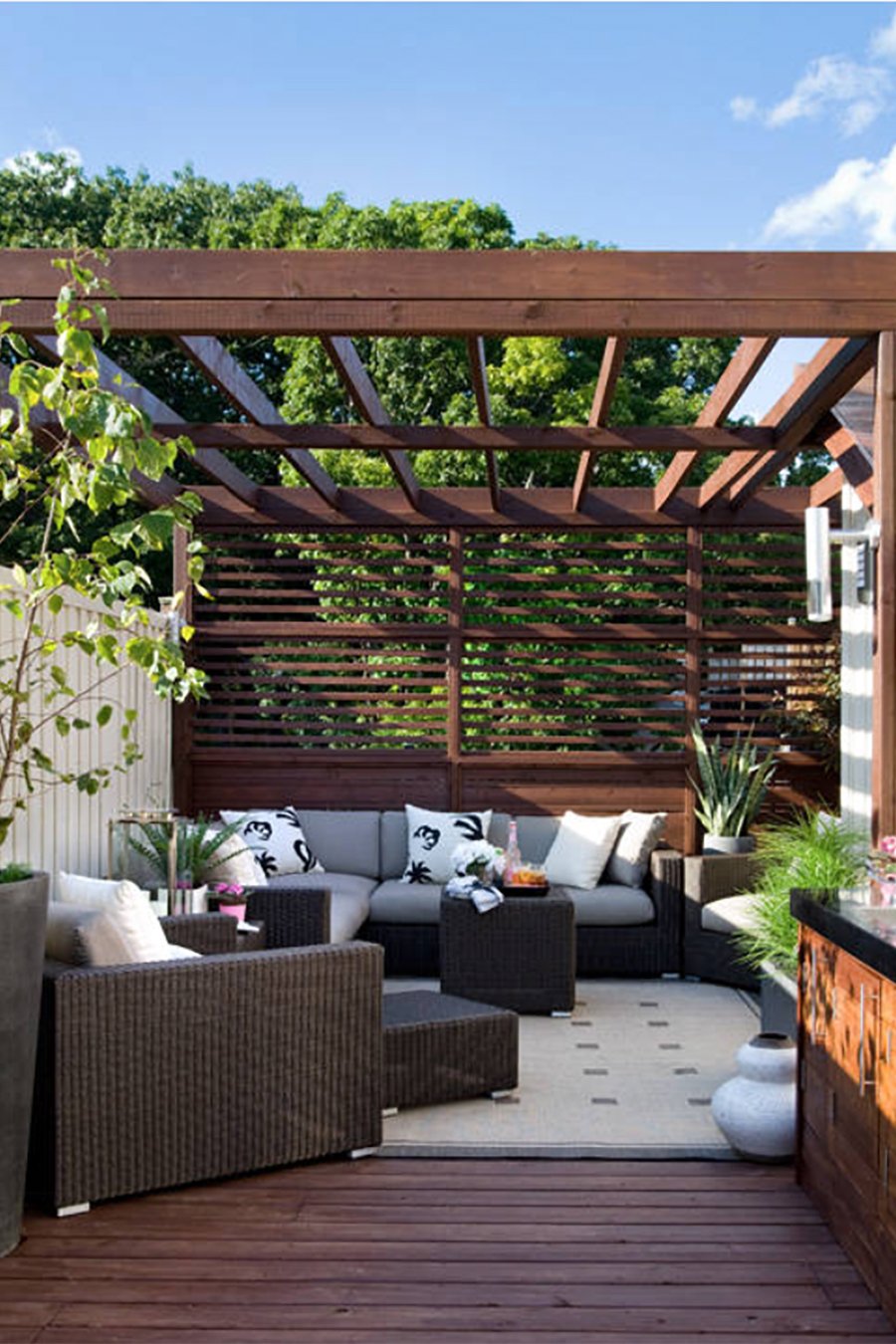 An Intimate Setting for Conversation

A bit more on the contemporary side, this pergola has a lovely privacy screen to create an intimate setting. But what I love the most is how the space is styled. The outdoor rug creates a nice sense of space for the sitting area, while the planters of varying heights add lots of visual interest to the space. 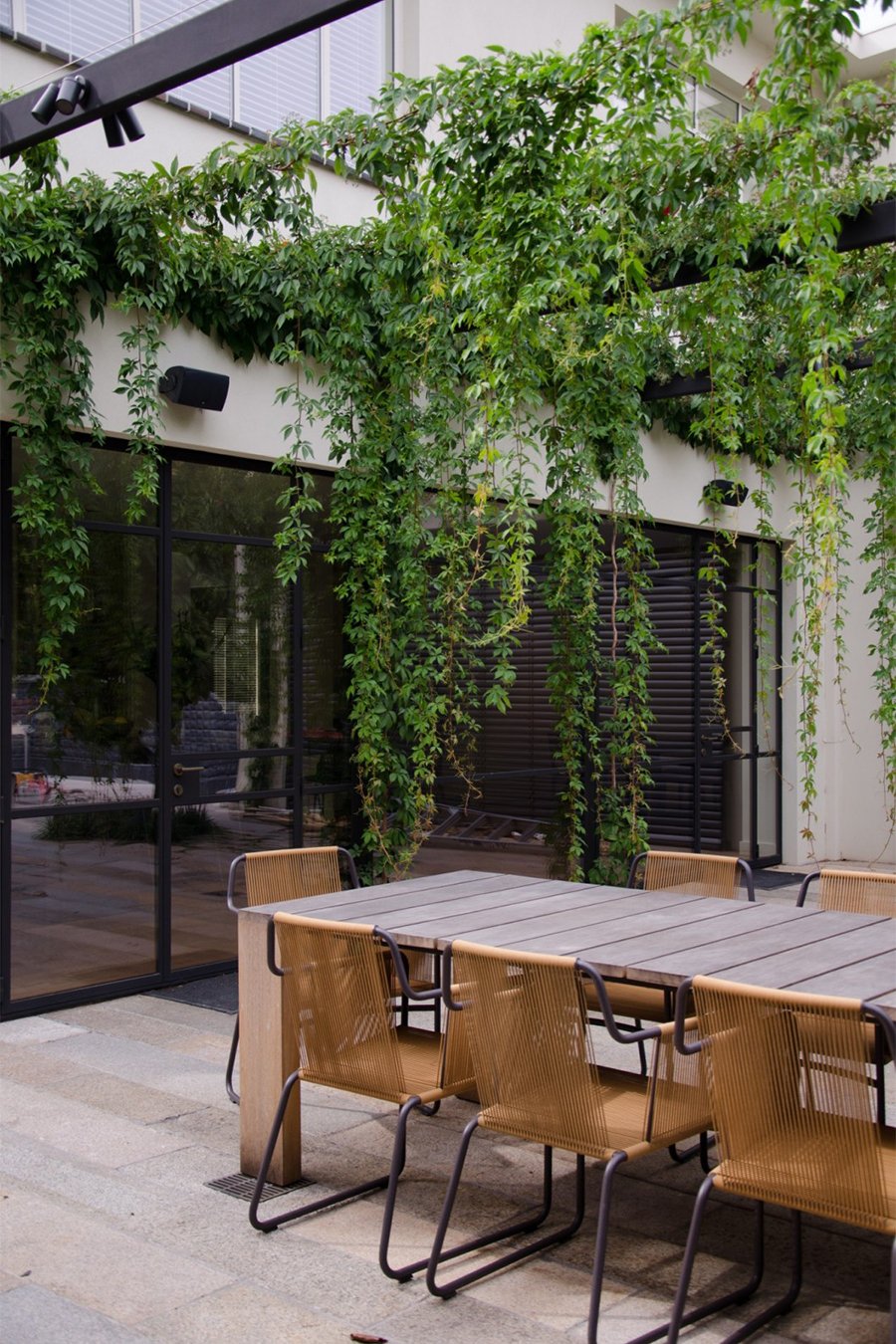 Simplicity At Its Best

I adore the simple, clean lines of this pergola; unlike the previous example, this one shows you don't need a lot of tchotchkes for the space to be stylish. Statement-making dining chairs and ample greenery are enough to make the space feel intimate and luxurious. 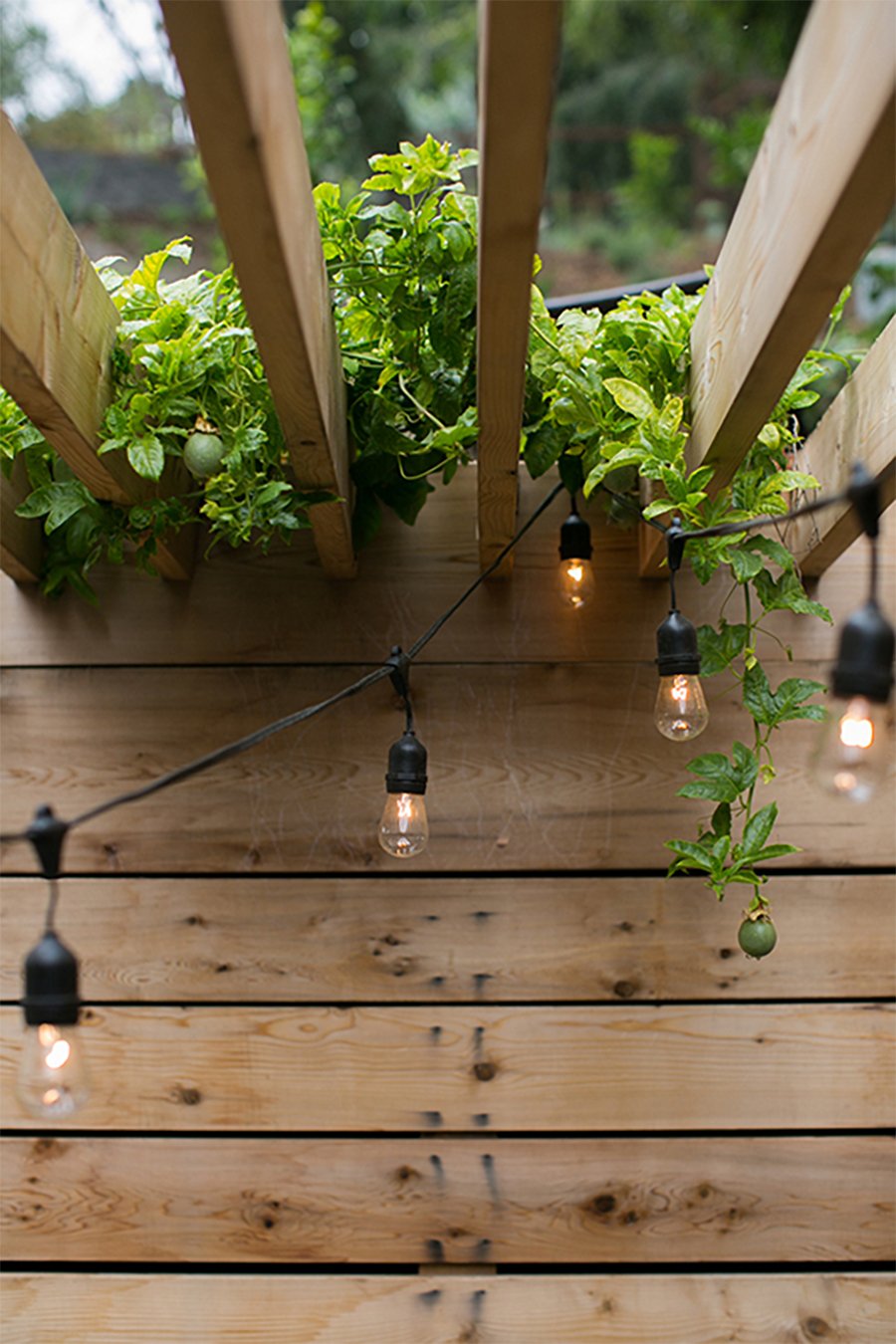 It's All in the Details

Another great example of simplicity done right. String lights intertwined with climbing plants is all this space requires to elevate it to the dreamy level. Can't you just imagine the romantic dinner parties you'd host in this space?

Image via SF Girl By Bay 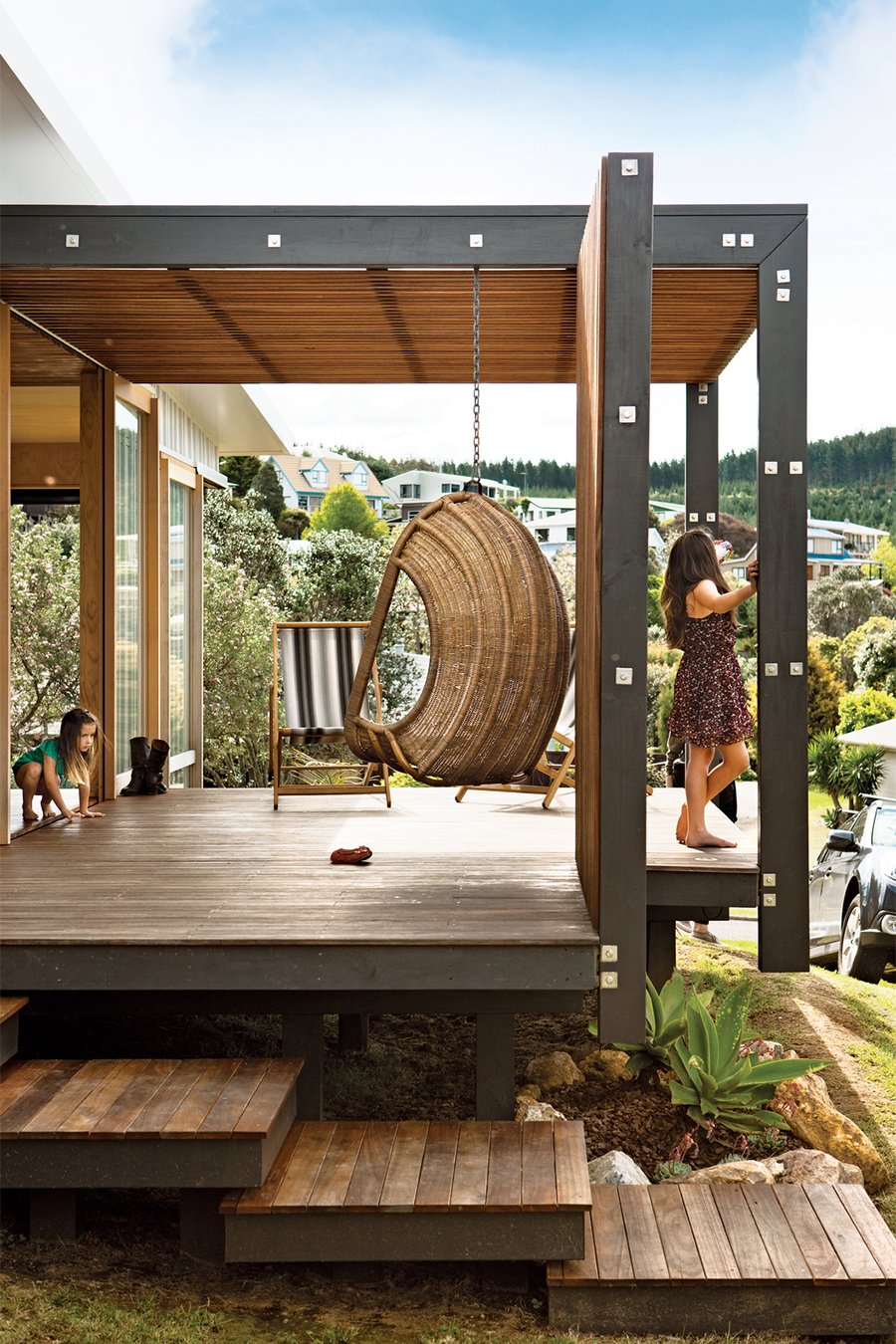 An Element of Surprise

Quite a bit more contemporary than what we're going for, this pergola is a mix of wood and steel elements. My favorite feature, however, is the swing – a great piece that adds lots of personality (not to mention fun!) regardless of pergola style. 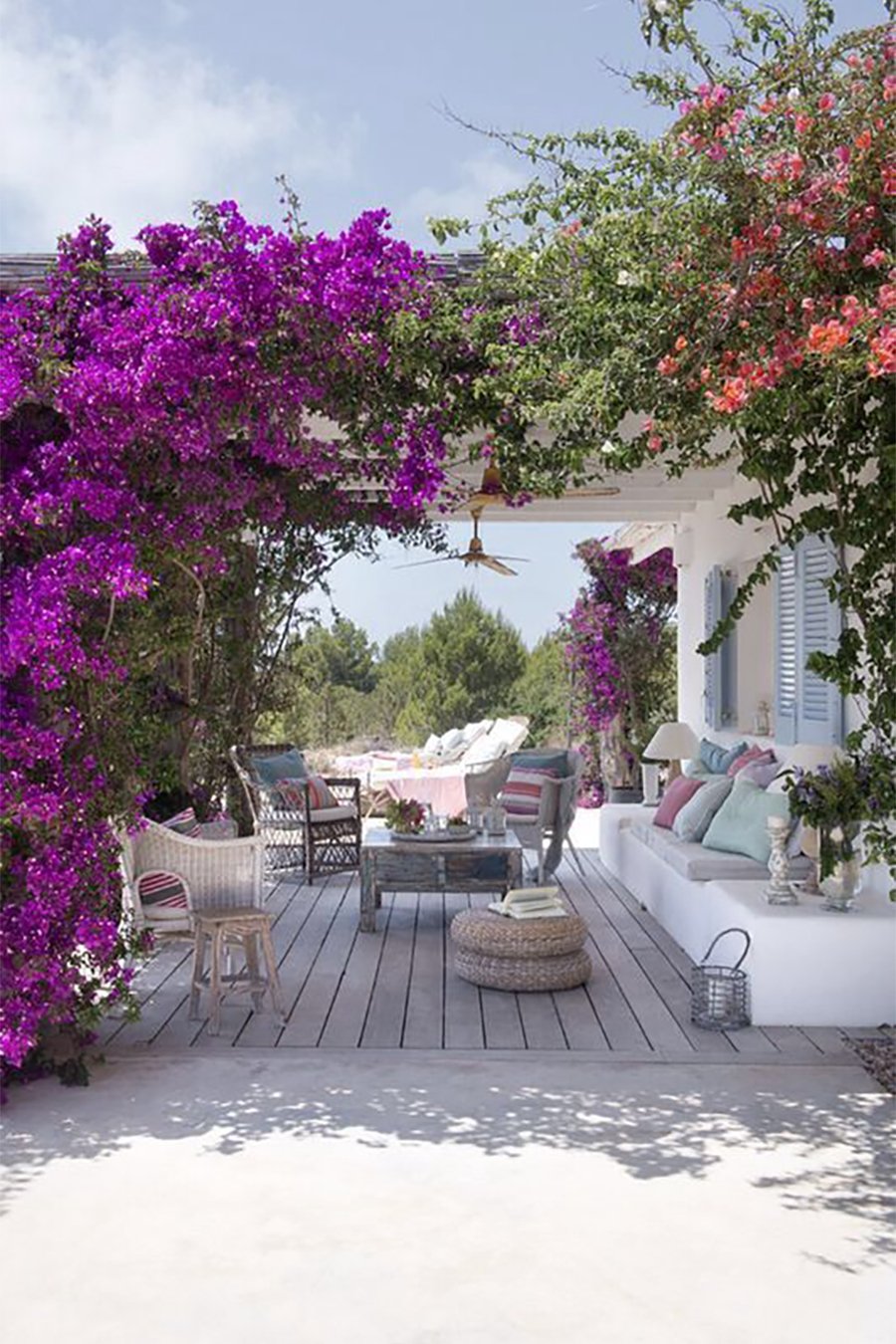 This pergola example is the epitome of Mediterranean charm; figures, as this particular house is located in Spain. The feature to borrow here is the climbing flowers; I'd just need to make sure whatever we plant is designated for our specific planting zone. 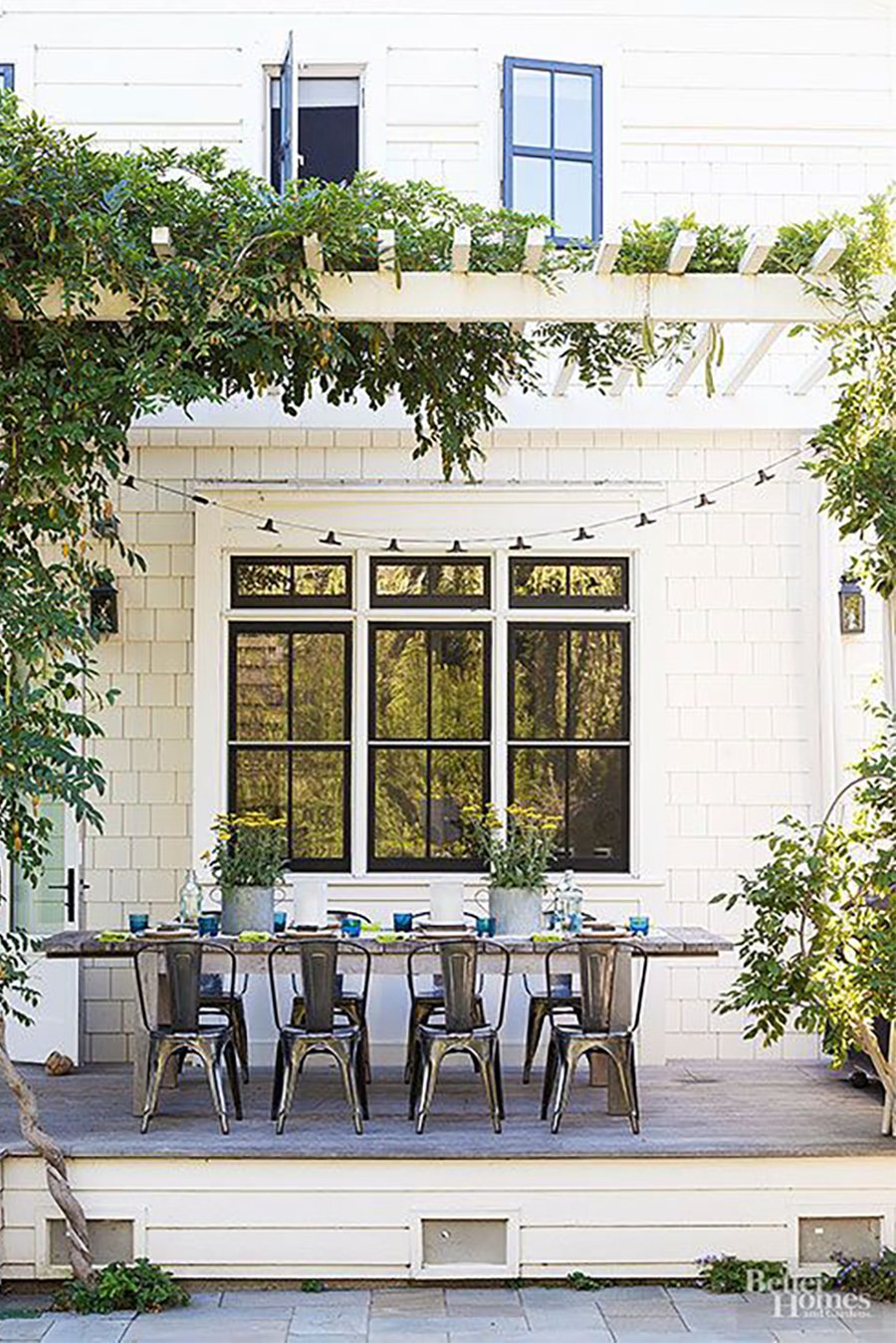 Greenery Makes It All Better

Another perfect example of how a few carefully thought-out details can elevate an outdoor space. All you need is a string of lights (preferably solar!), a simple outdoor dining table and greenery winding its way up the pergola poles and beams.

Image via Better Homes and Gardens 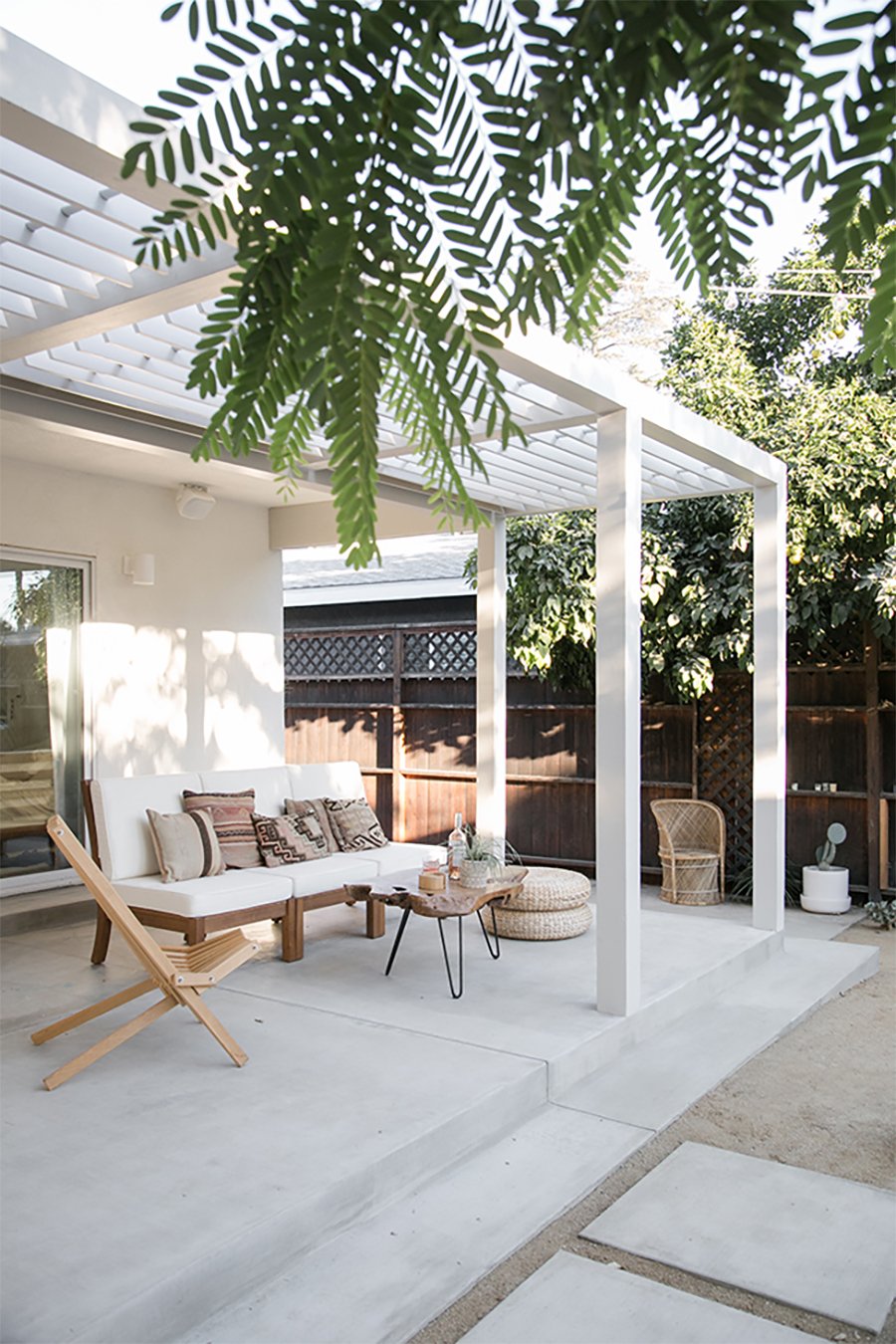 Another contemporary example of a pergola, but what is a bit difficult to grasp just from one photo is that this outdoor space has multiple functional areas. I also love the fact that it's white – perfect for warding off summer heat. 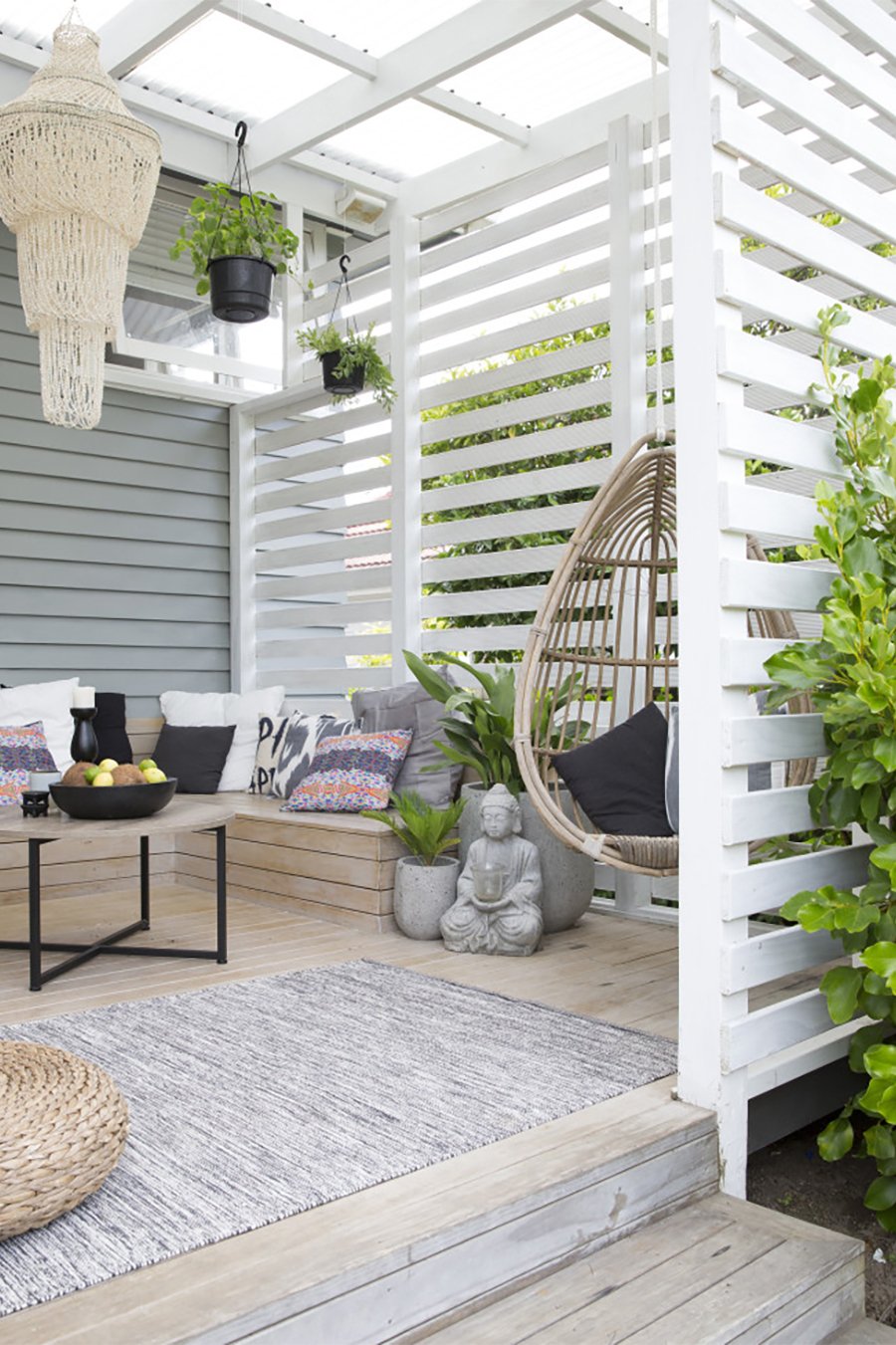 Your Own Private Oasis

The privacy screen is a great idea, but even without it this outdoor space has plenty of personality – what with the swing, hanging plants, the built-in seating and that chandelier!

Image via Homes to Love 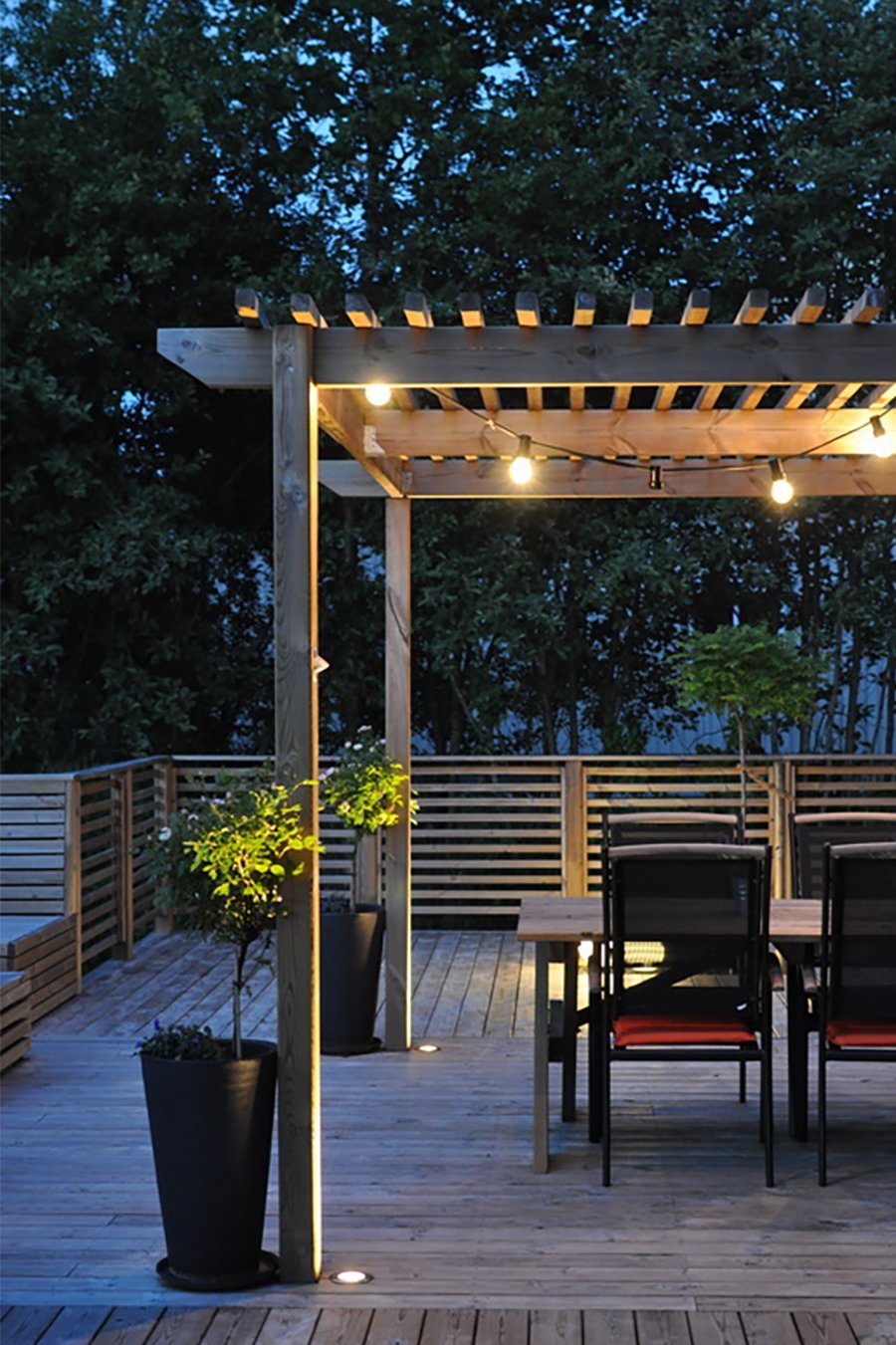 String Lights to the Rescue

Ooh la la, an evening shot! This image perfectly depicts how I plan to use our pergola: alfresco dinner parties! The integrated floor lighting is a bit of a luxury that we won't be splurging for, but the same dreamy look could be achieved with lots of string lights. 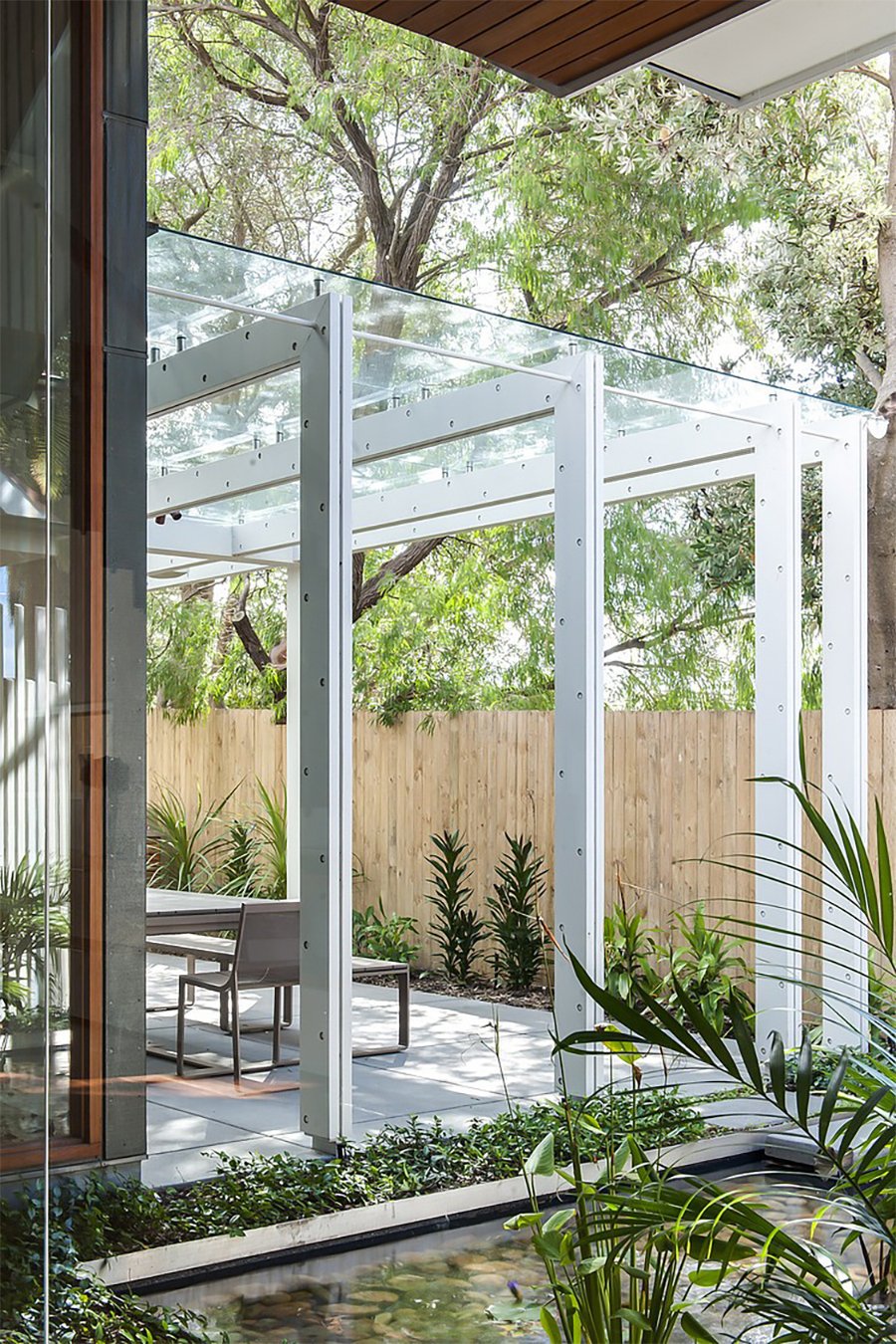 What I love about this example is how the pergola is integrated with all other outdoor elements. From the bordering plants, to the facade of the house, each detail is intentional, which is how great design should always be. 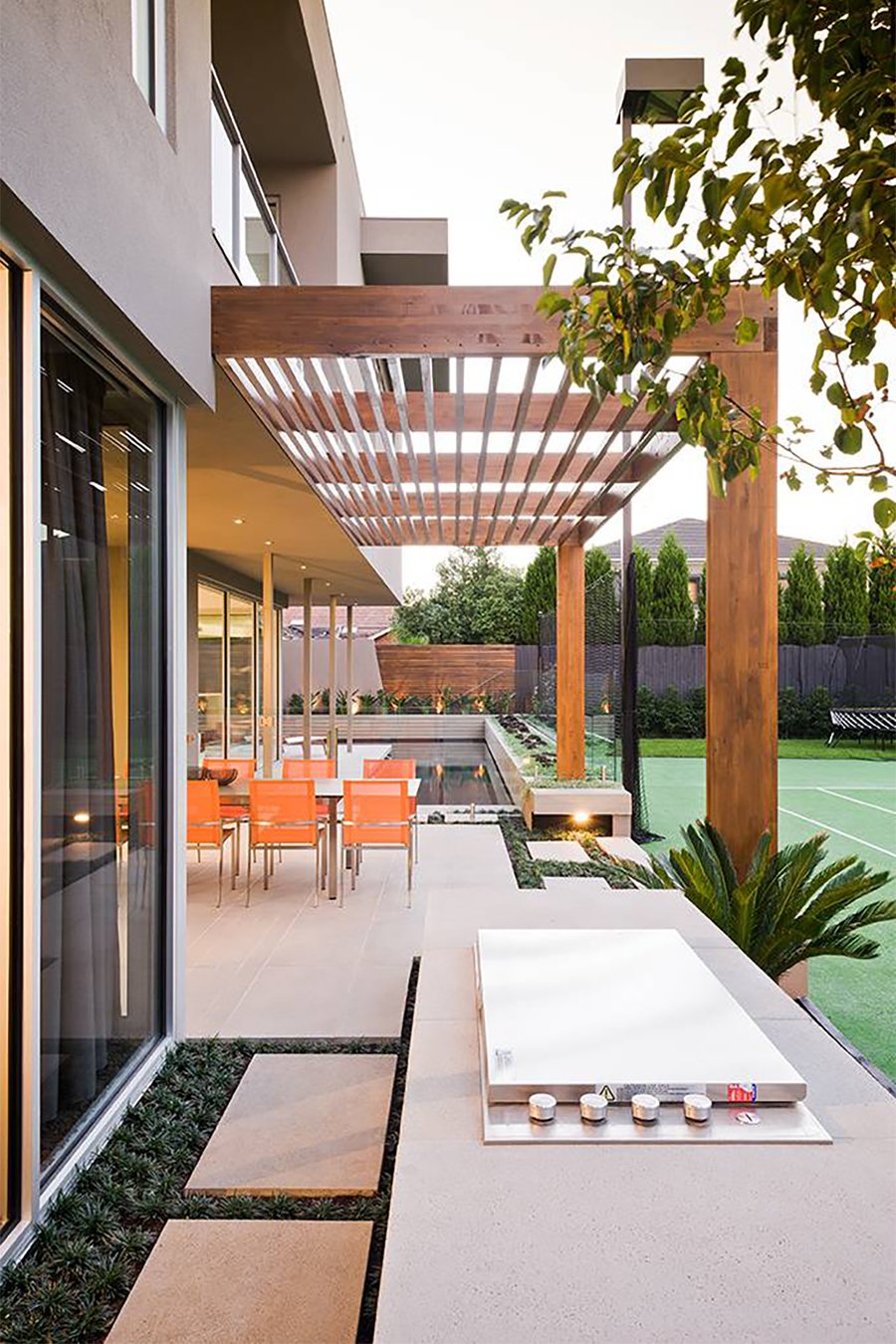 Pergola of My Dreams

I couldn't help but include this dreamy pergola; it's been on my Pinterest deck inspiration board for years! Once again, I adore how each element plays with the next. Although far more expensive than anything we could allow ourselves in our 1930 bungalow, the lesson with this one is to pay attention to the details. They're what make or break the overall look. 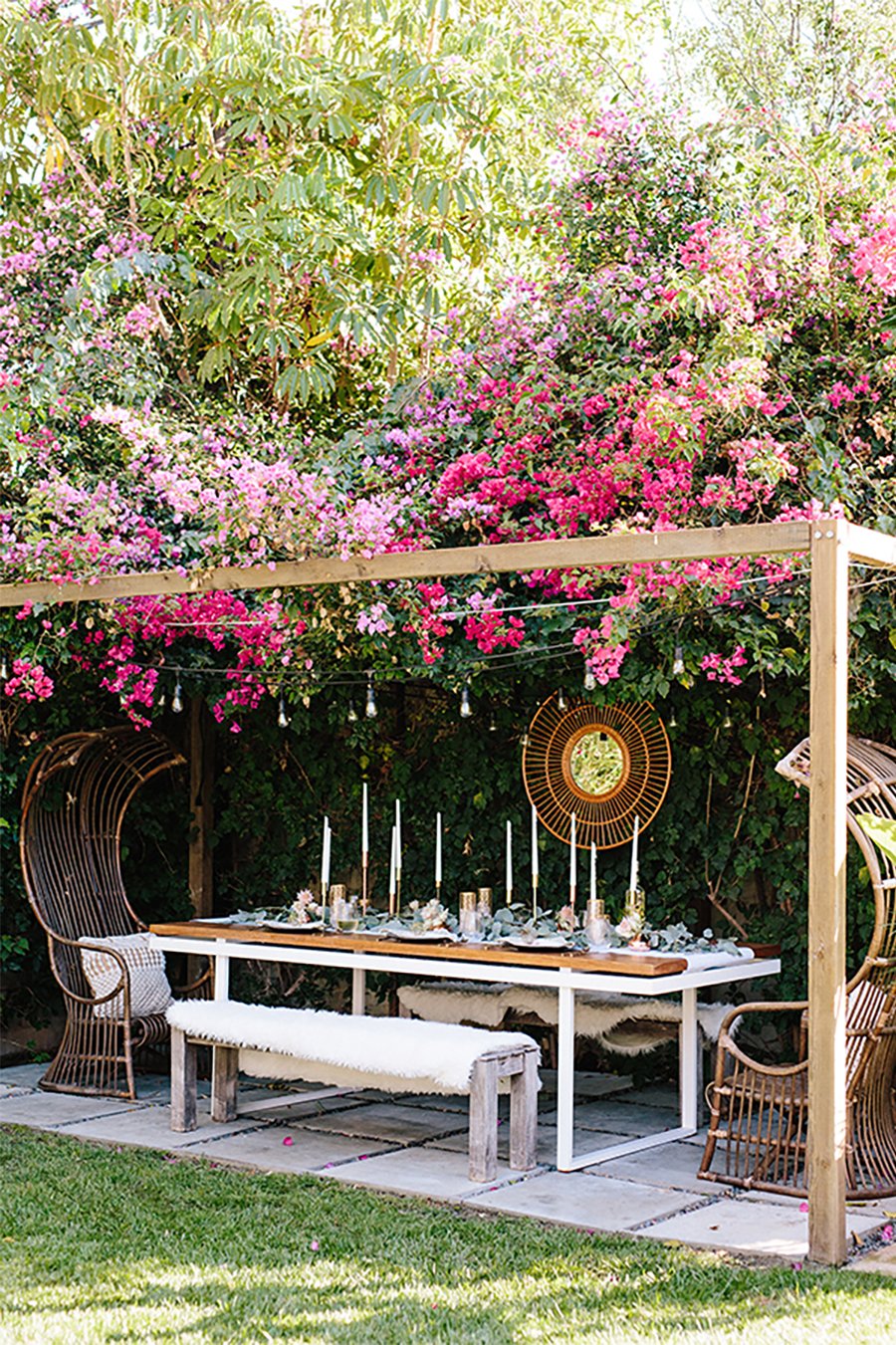 I adore everything Sarah Sherman Samuel designs, including her garden pergola. In this example, the pergola is detached from the house and just big enough to house a dining table – proof that it doesn't need to be elaborate to be beautiful. And can we talk about those gorgeous flowers?! Really wishing we had California weather to keep beautifies like that alive year-around. 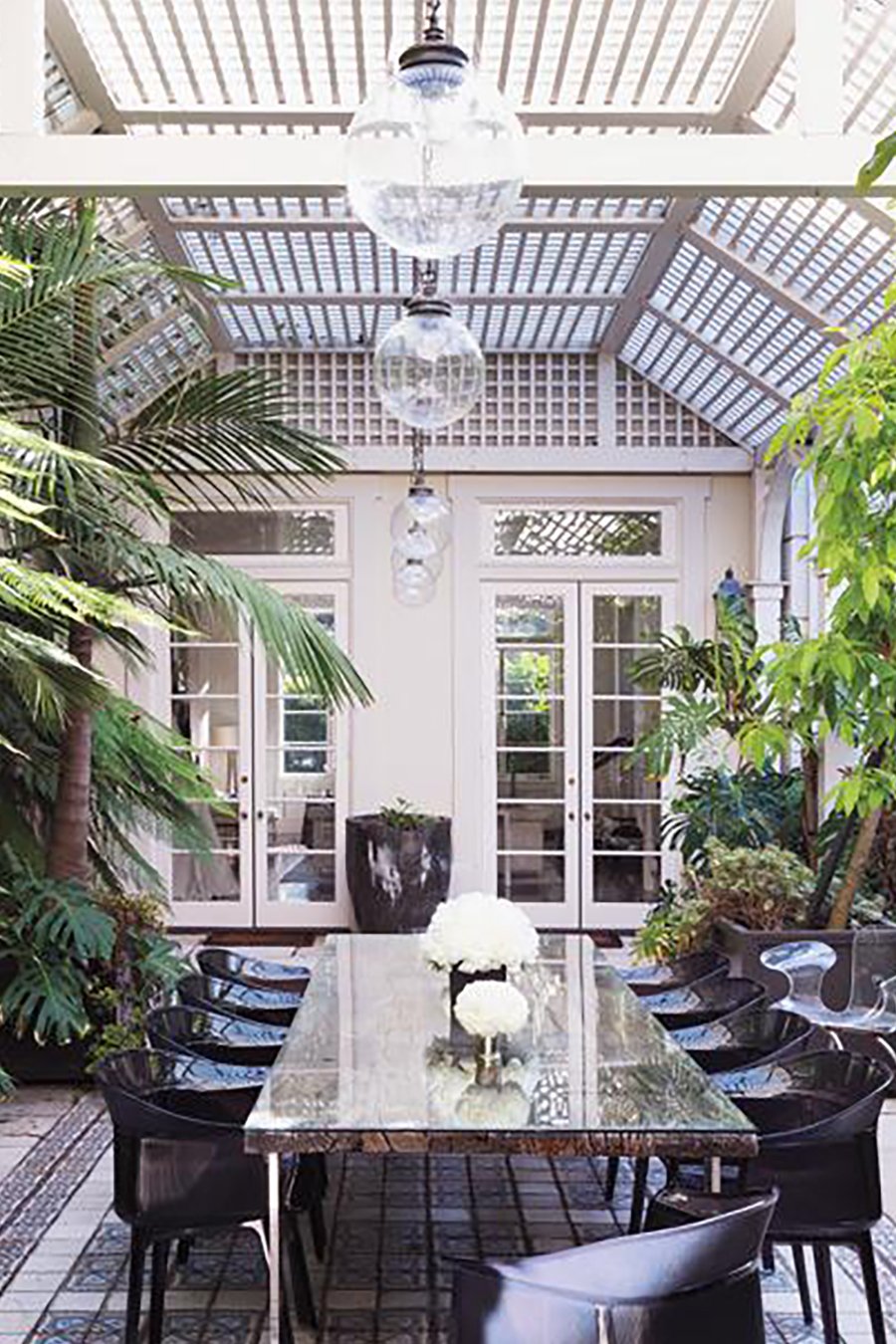 Big Enough for All Our Friends

Here we have another fabulous example of the lifestyles of the rich and famous. The ideas to borrow here are the simple globe lighting, plenty of plants to add interest to the space, and, of course, a nice, long dining table to fit all of our friends. 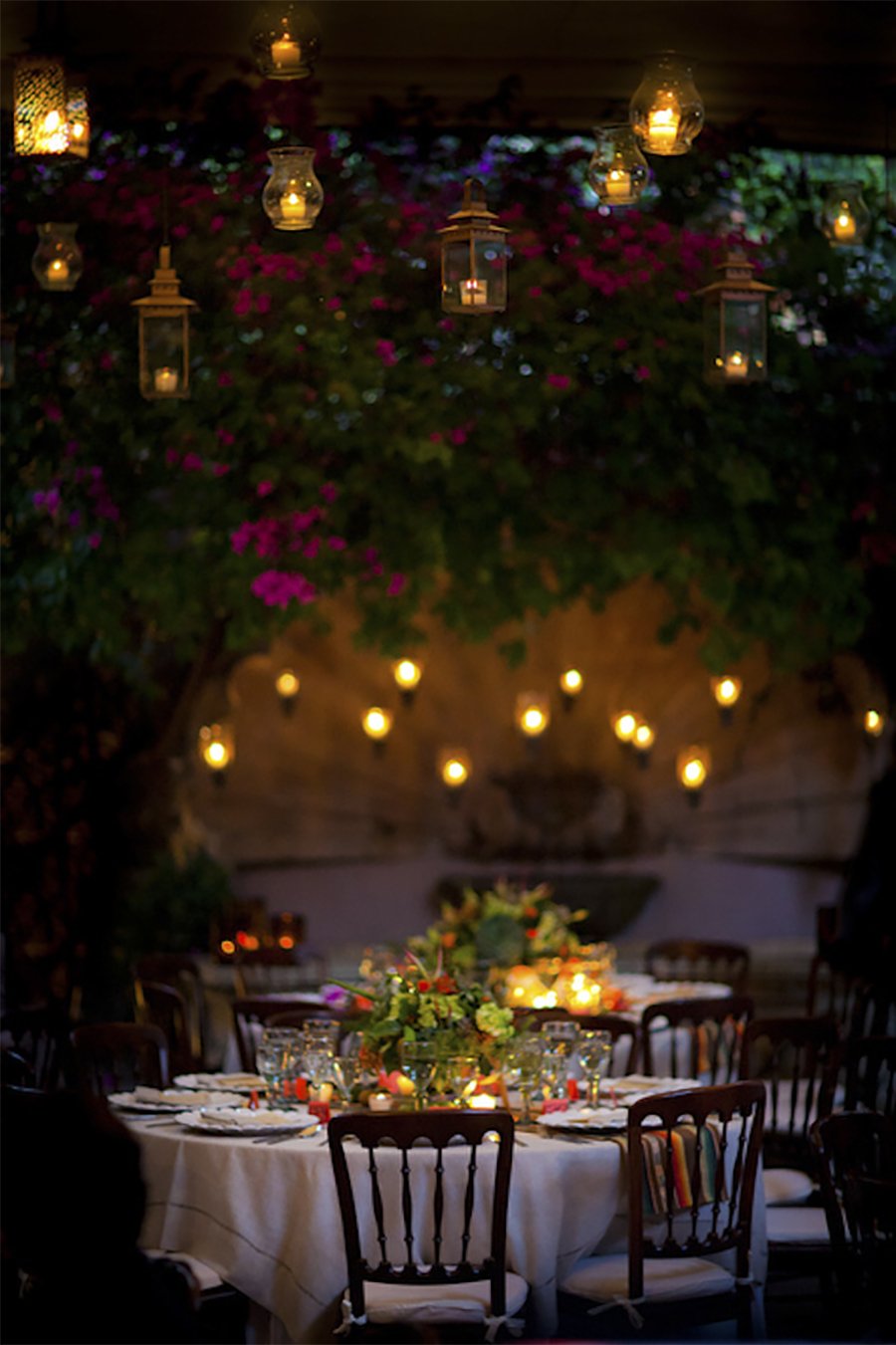 Taking Romance to Another Level

Here we have a perfect example of how to utilize a pergola for events, which I plan to do for my upcoming baby shower. Once again, flowers and hanging tea light holders add plenty of romance to the space, elevating a simple dinner party to a whole other level. 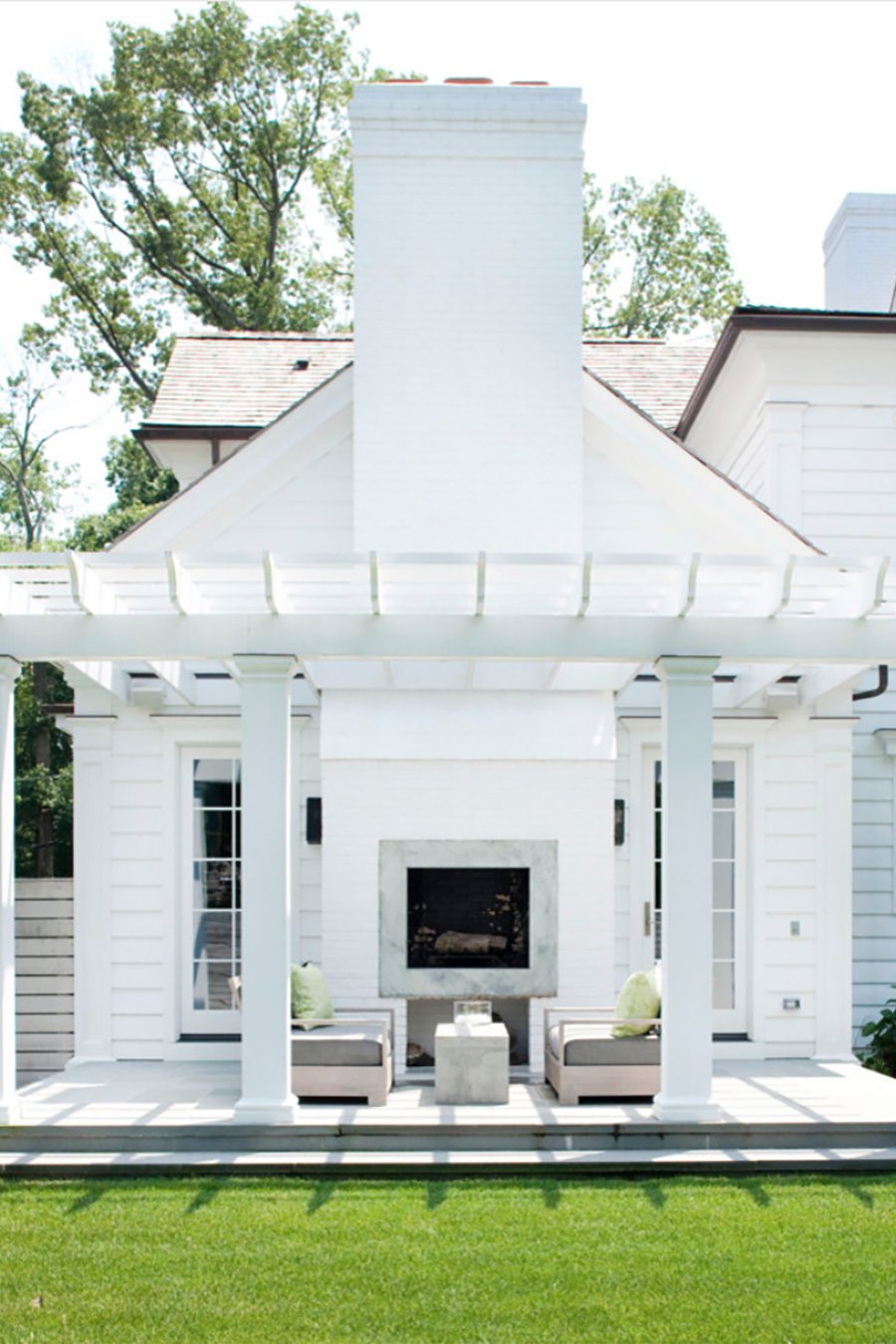 All that white may not be the most practical option, but it sure is pretty to look at! Plus, I'm sure it keeps the area somewhat cool during hot summer days. I especially love the symmetry of this example, which allows you to keep the styling to a minimum. 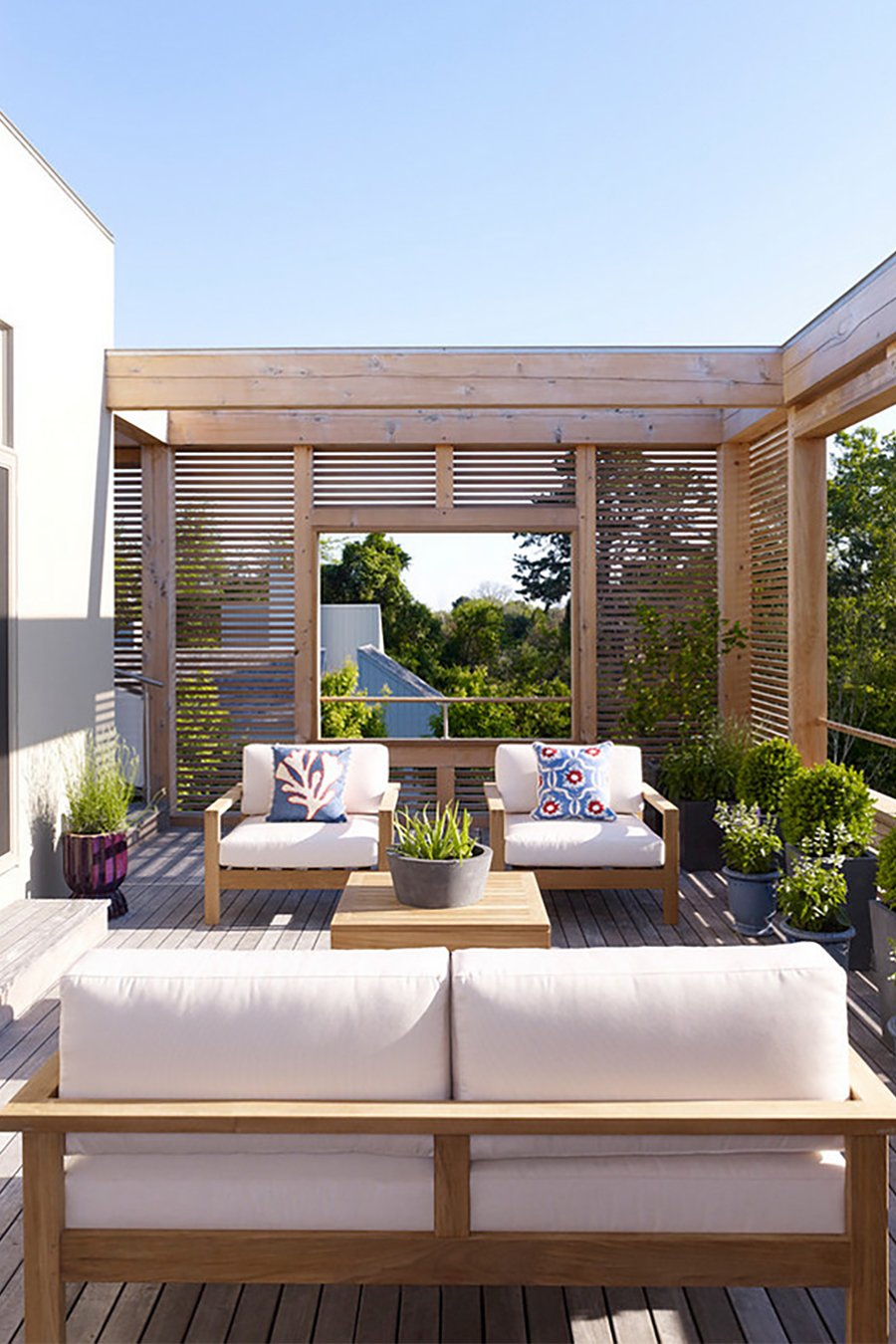 Although we don't plan on adding a privacy screen to our pergola, this example shows how one can make the deck feel more intimate. A great, less-expensive alternative is to hang weighted curtains (weighted so that they don't flap in the wind), which you can easily open and close based on your mood. 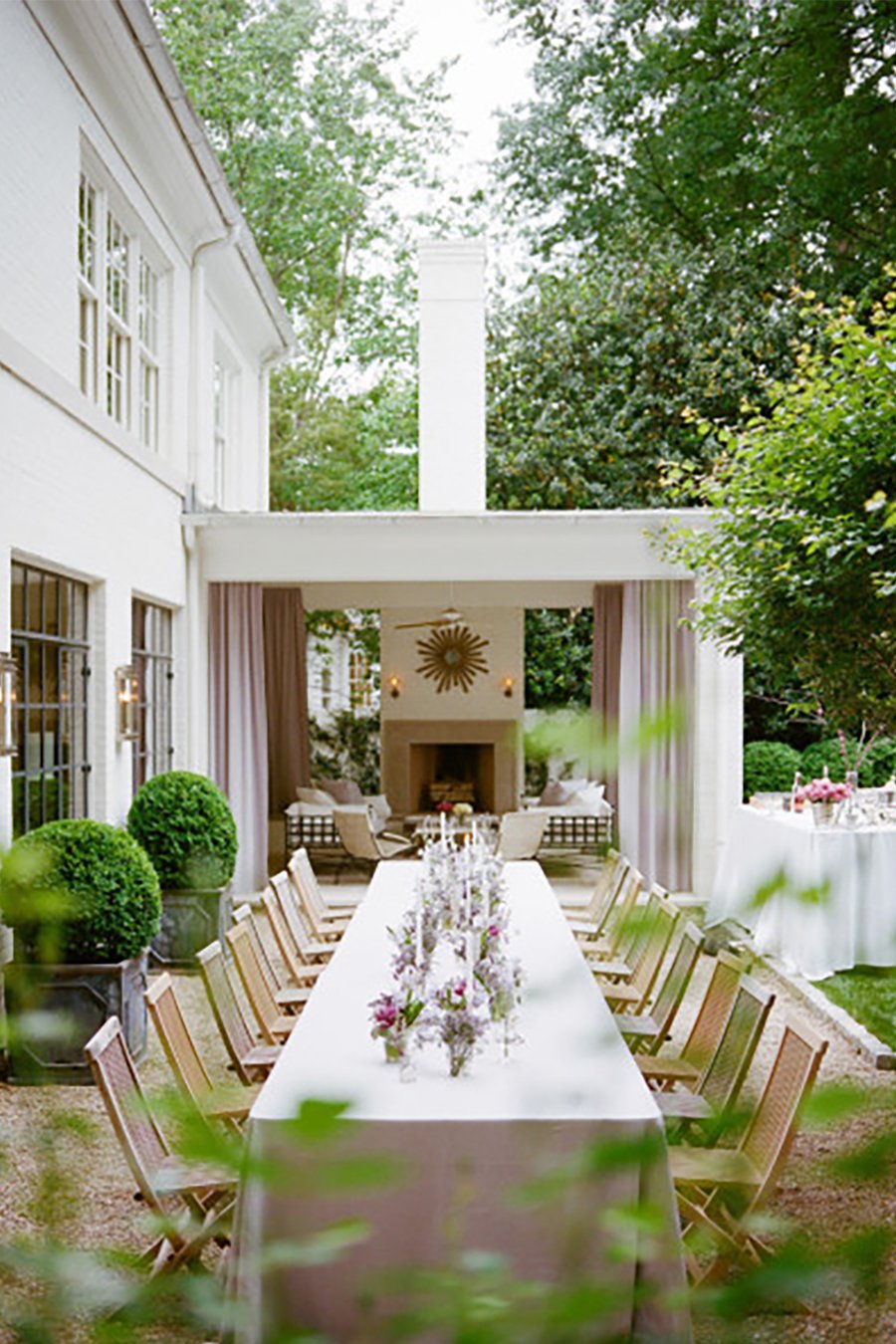 Though more of a patio than a pergola, you can easily imagine this space with a slatted roof. The curtains add so much texture and, once again, give you the flexibility to close off the space for a more intimate gathering. 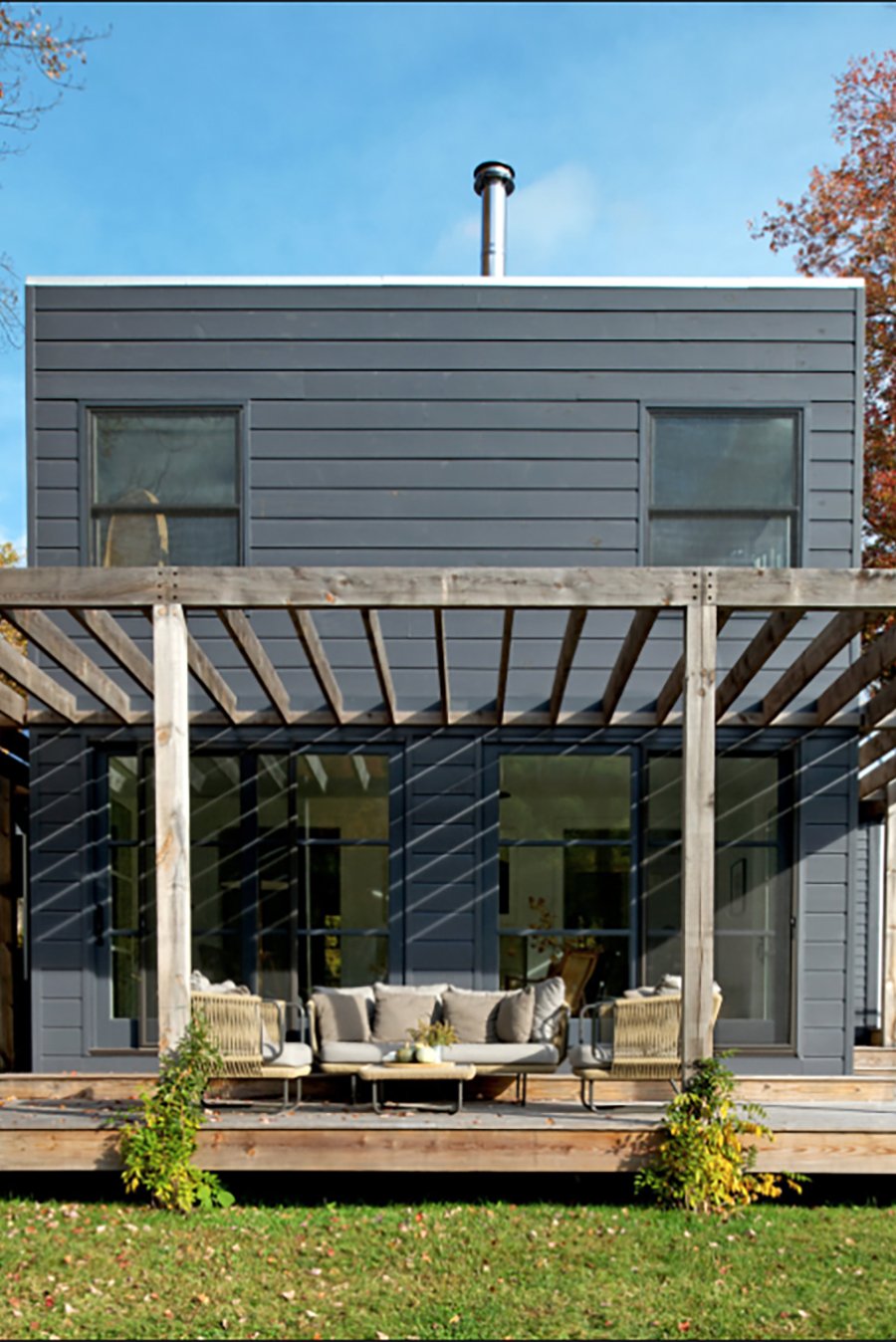 I love that this example is very, very simple but also very pretty. The wood looks to be unfinished, and the deck itself is a simple floating option (like ours will be). Even though the plants near the posts haven't begun to climb yet, you can already see the incredible potential here.

Image via The New York Times 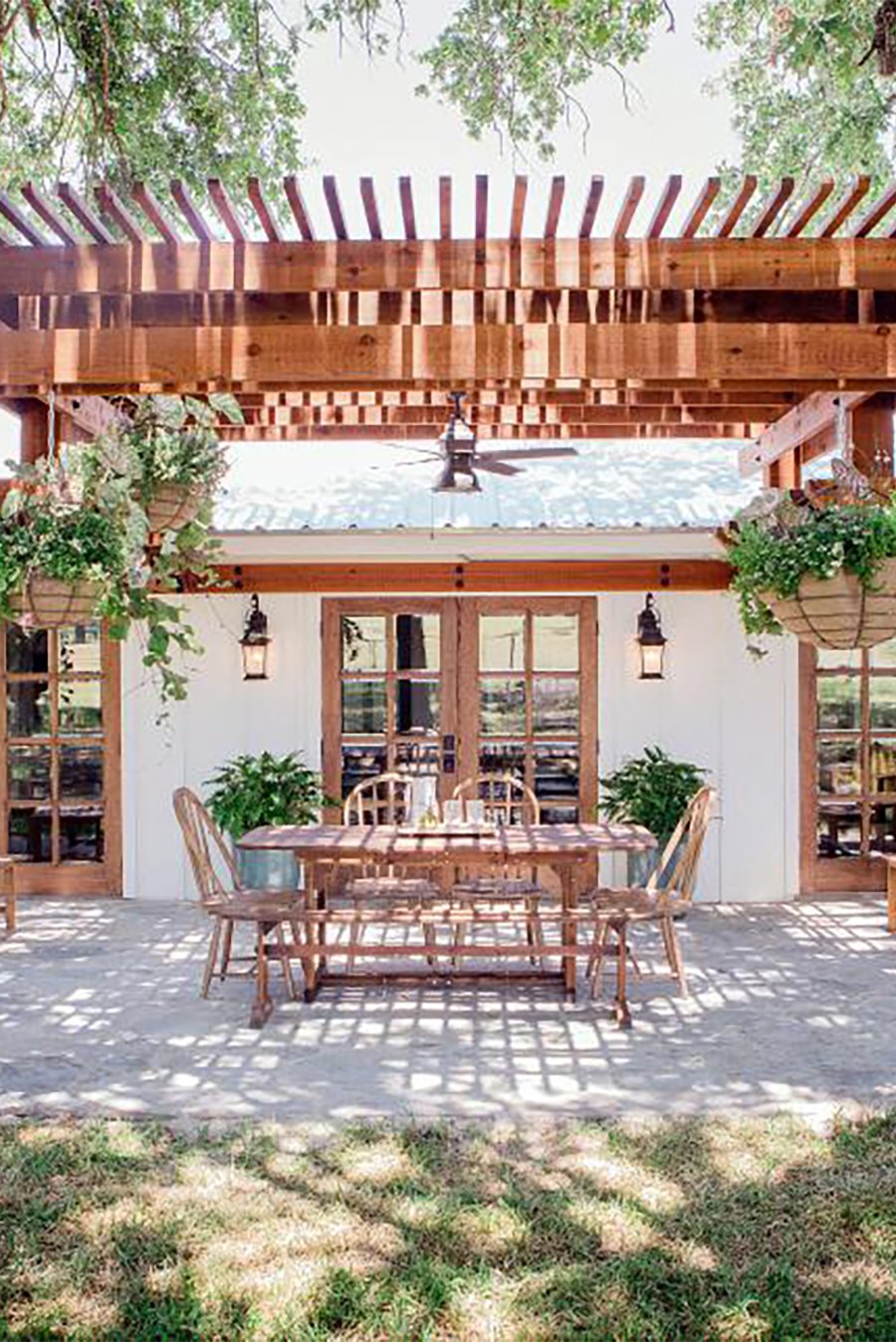 Another more traditional option, this pergola makes enough of a statement with a few carefully placed hanging plants, once again proving that you don't need a whole lot to create a beautiful outdoor living space.

Check out the following articles for our latest outdoor living space designs: