Thank you to Wayfair for sponsoring this post. All content, ideas and words are always my own. Thanks so much for supporting the brands that make FOXYOXIE.com possible! 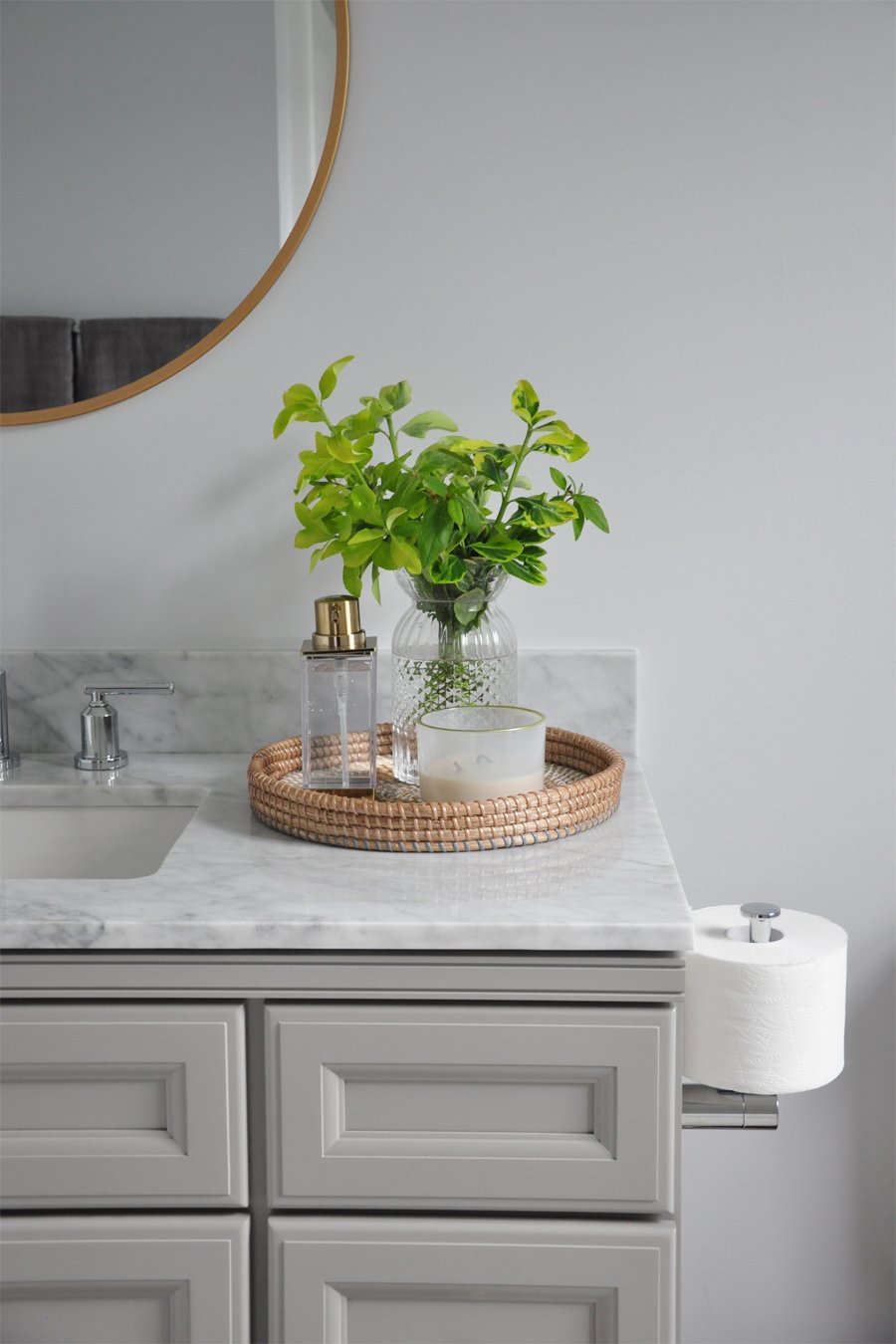 Ladies and gentlemen, today is a big, big day. I’m incredibly excited to share our first official room reveal at The Pink House: the guest bathroom! We have been working extremely hard on this house since January, and I’m excited to finally start sharing the finished projects with you.

Side note: I should really think of a new name for this house, seeing how its exterior is no longer pink. What name would you suggest?

As a rule, a reveal tour must begin with a “BEFORE” and “AFTER” comparison. If you’d like the complete “BEFORE” tour, click here. 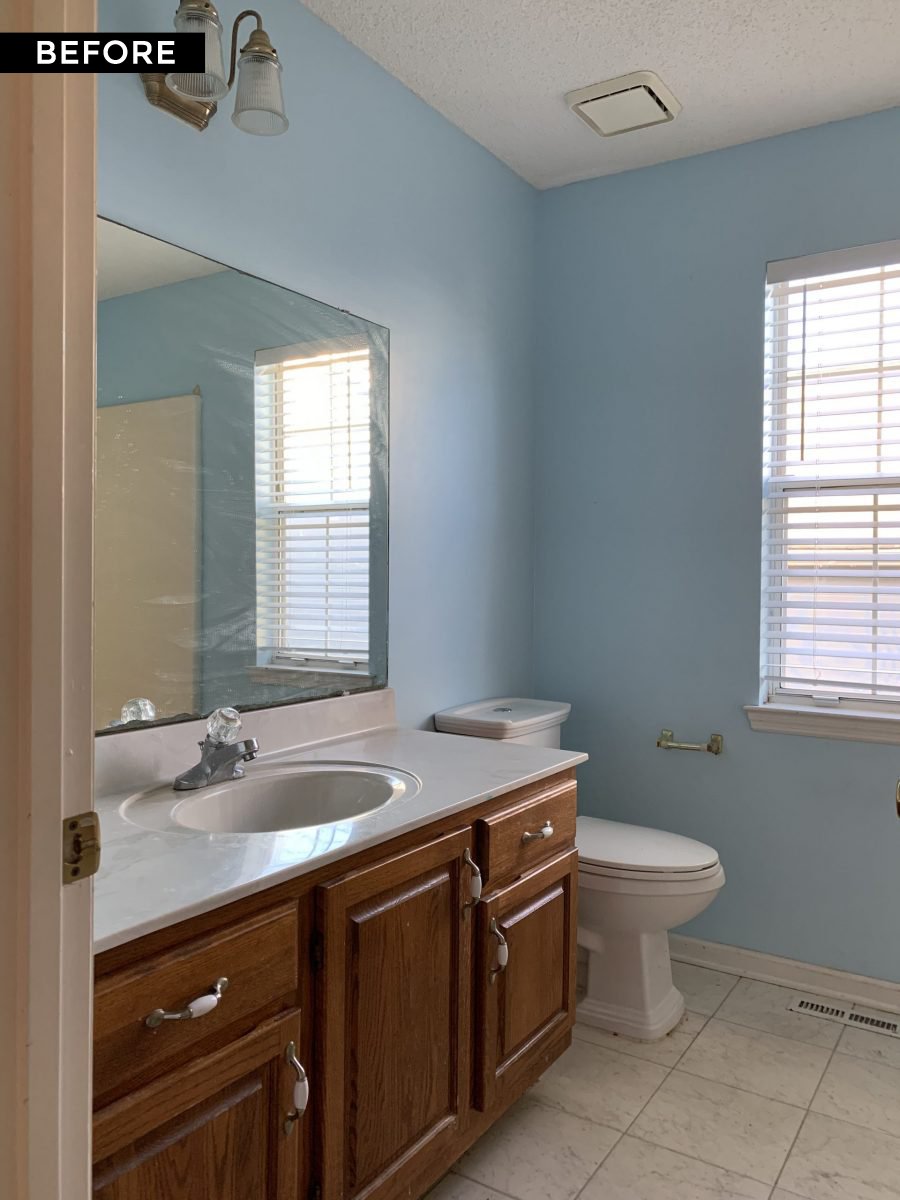 Ready for the “AFTER” image? Here is how the bathroom looks today… 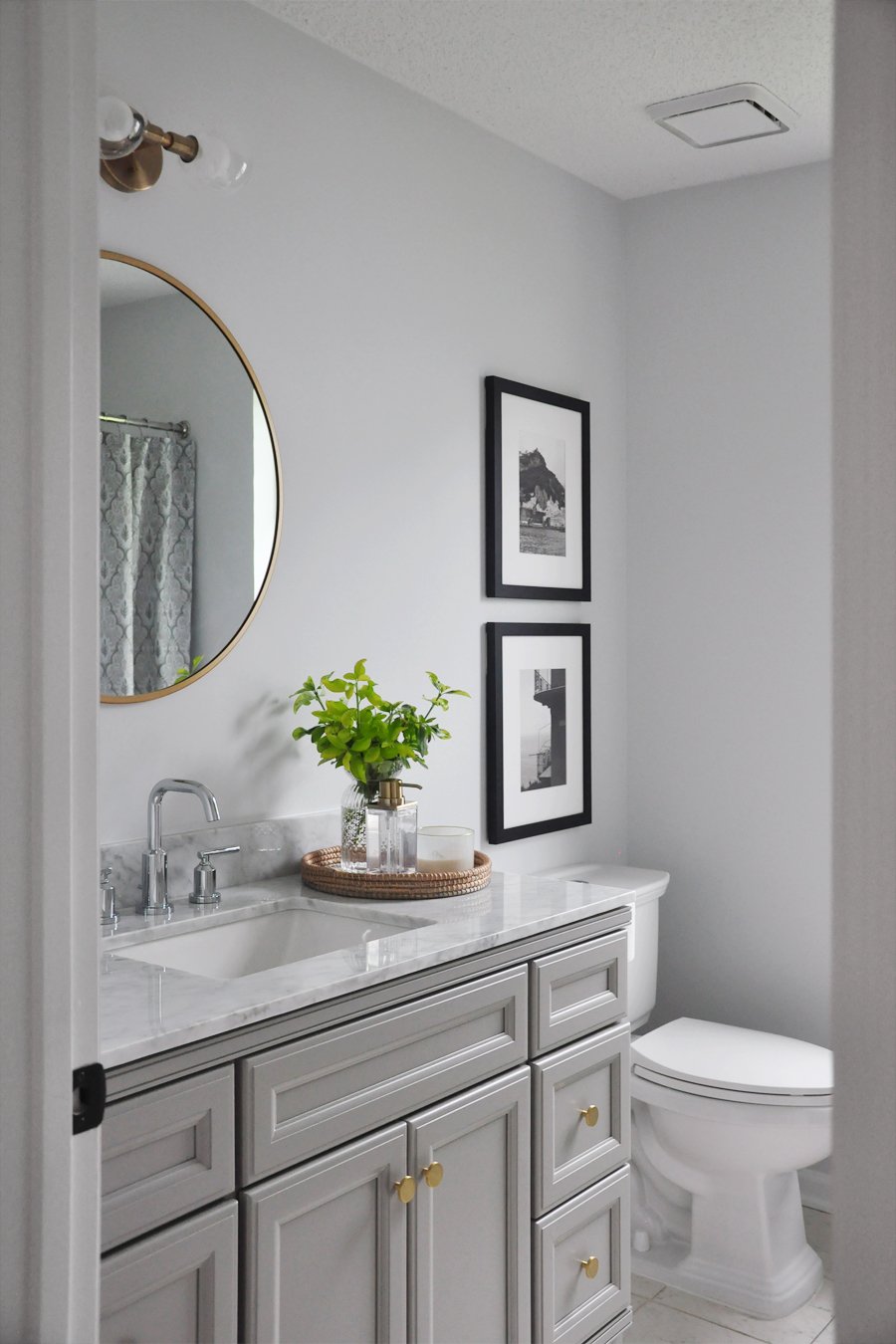 We plan to ultimately sell this house, so ROI and resale value were at the forefront of every design decision in this bathroom – and the house in general. We kept the existing footprint and several of the elements, since that was more cost-effective. This, of course, presented a challenge for me as the designer, because there were certain elements I may not have chosen if I were designing this bathroom from scratch. But designing from scratch is rarely the case in real life; most people have budgets to stick to, and a full gut reno is a rare occurrence. Typically there are always existing elements to work around.

I’m happy to report, though, that the end results turned out even better than I imagined. In fact, if I was designing this bathroom for ourselves instead of potential buyers, the only detail I would add is wallpaper – a large-scale floral or a fun geometric pattern.

The aesthetic I was shooting for in this bathroom was a mix of modern and traditional but overall neutral, bright and classic. It is a guest bathroom, after all, and I had mass appeal in mind.

Going into this project, I knew many of the updates would be cosmetic; our focus was on replacing non-functional elements, upgrading the finishes and adding value where it made financial sense. But as you’re about to see, sometimes cosmetic updates are enough to completely transform a room.

Speaking of cosmetic updates, can we talk about the transformative power of paint? Here we used “Barely White” by Farrell Calhoun. We actually painted the entire house the same color – something we did in our bungalow, too, and I really, really loved the cohesiveness. 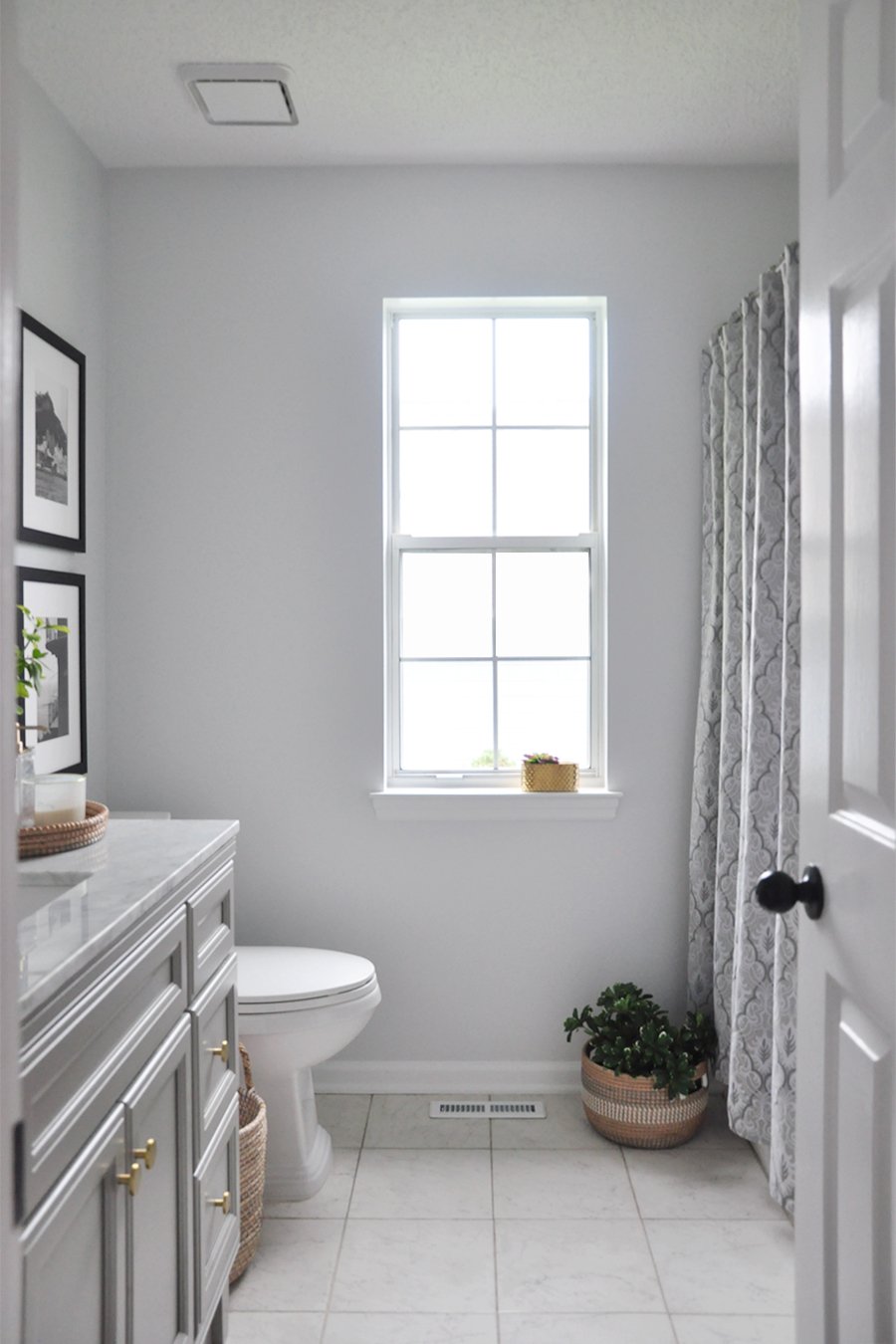 Another cosmetic update: resurfacing the shower. As much as I would’ve liked a custom tiled scenario here, that sort of investment just didn’t make financial sense in this case. 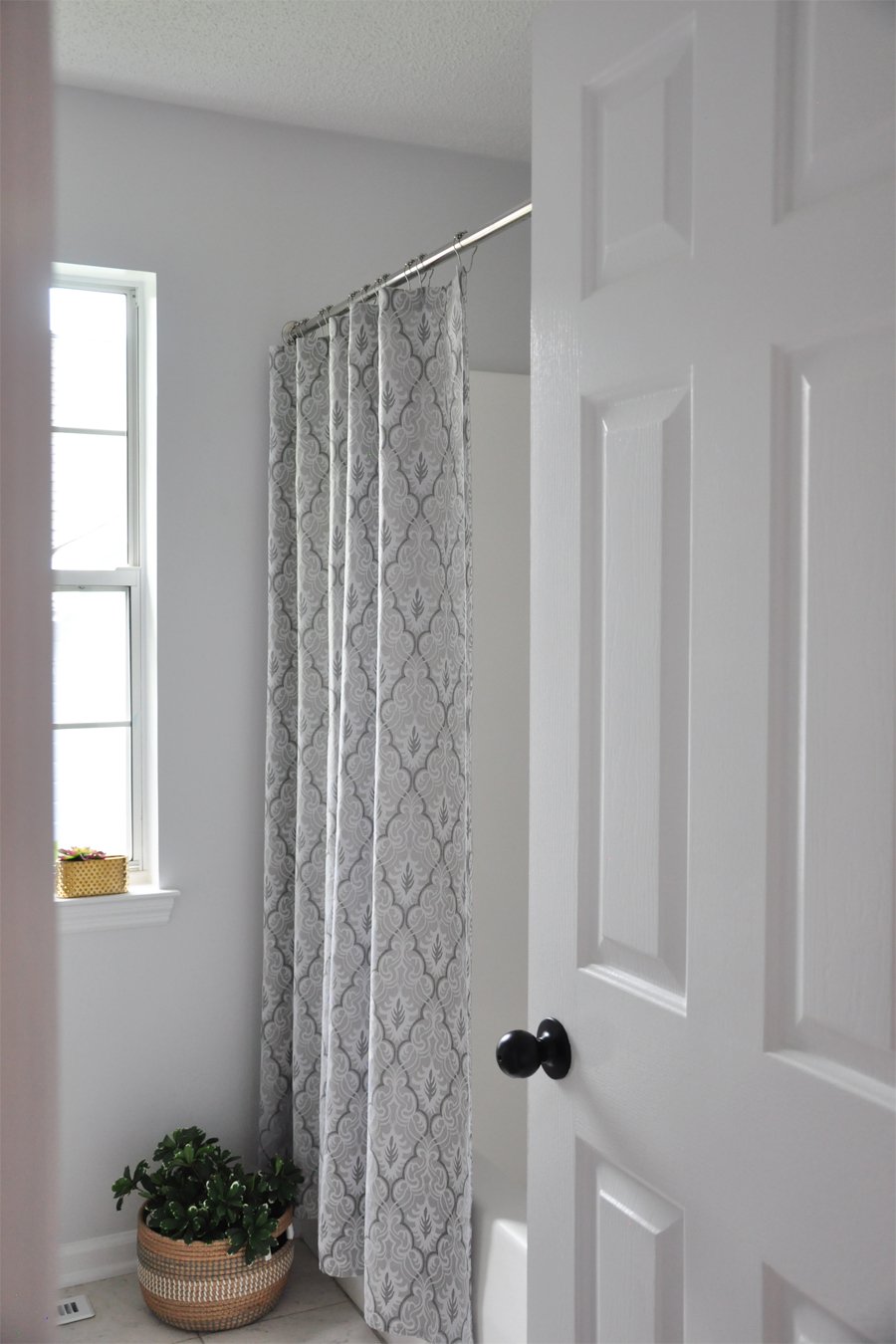 Keeping the existing shower insert presented yet another design challenge: I originally planned to completely upgrade the shower plumbing fixtures – both the decorative trim and rough-in valves. But because the shower insert was staying as is, we lost the option of changing out the rough-in valves. That, in turn, really limited our decorative trim options, because not only did we have to stay within the same brand, but we also had to make sure the new trim kit would retrofit with the existing rough-in valves. 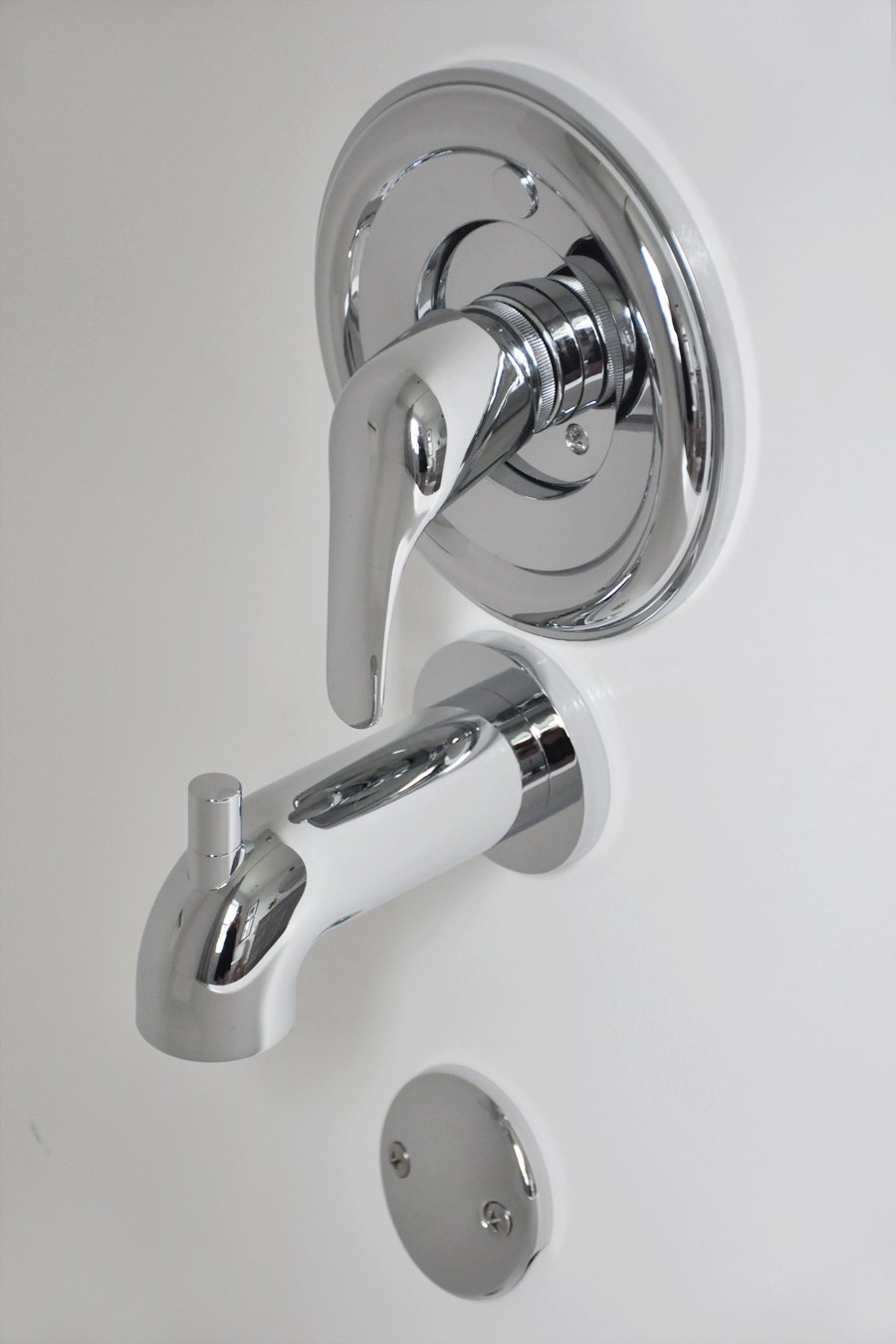 Sorry if I lost you for a second with all the plumbing jargon… I know this specific scenario may not apply to some of you. But if you’re considering a bathroom reno, I recommend thinking through every single plumbing detail so that you’re fully aware of your options. 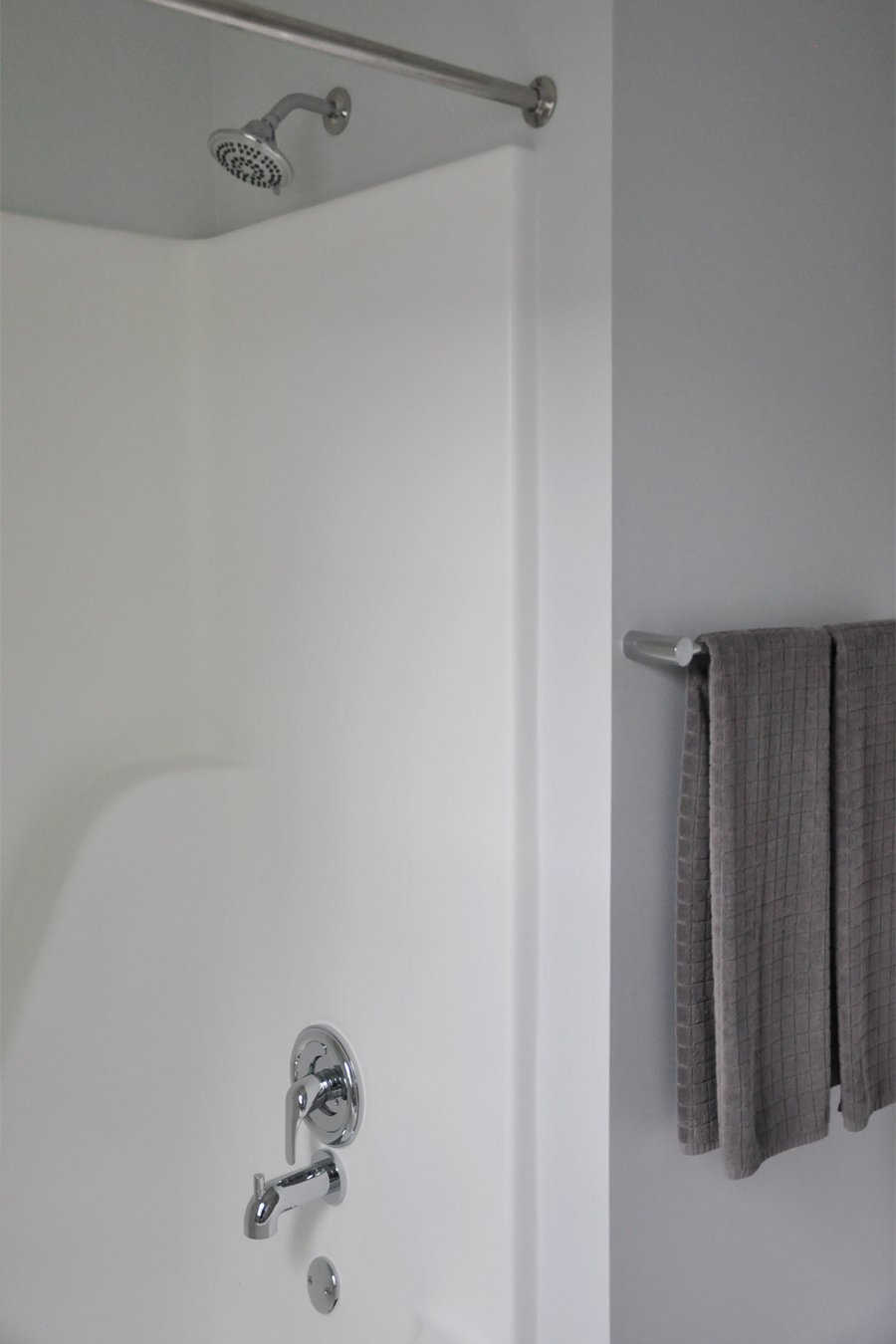 Moving on, the first item we bought for this space was the vanity cabinet. That gray color is literal perfection, is it not?!

The cabinet came with brushed nickel hardware, but I – in my typical perfectionist fashion – updated the nickel to a satin brass option. I wanted to tie in the mirror and sconce, as well as add depth and interest.

You already know I love mixing a cool gray color palette with warm brass finishes. You’ll see this combination again and again throughout this entire house, as I share more room reveals. 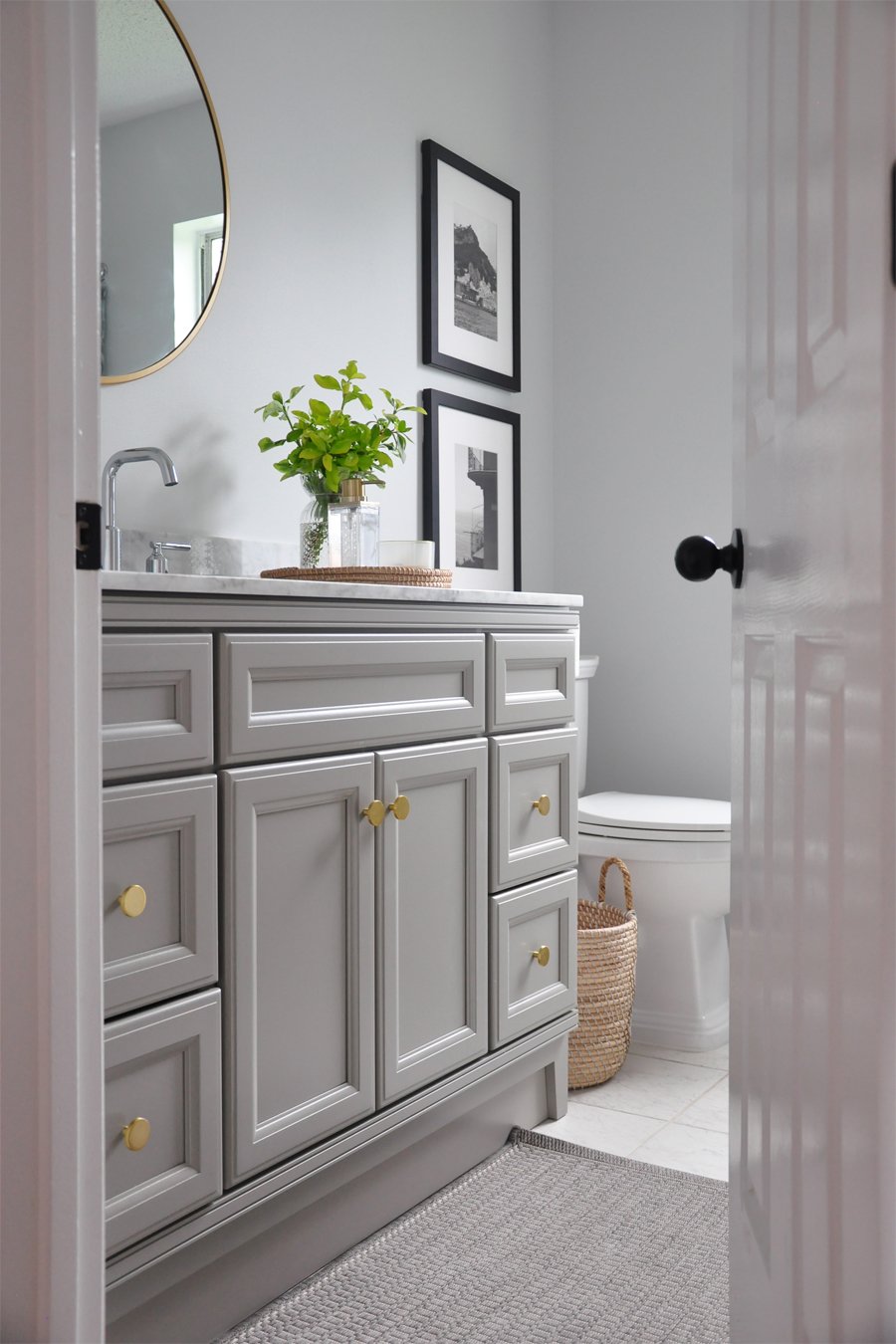 The original vanity was 55″ long, which was proving a bit difficult to replace. Instead, we opted for 48″, which is a more standard, widely available size. I like that the smaller vanity leaves a little more breathing room between the vanity and the toilet. At the same time, it offers more than enough storage. 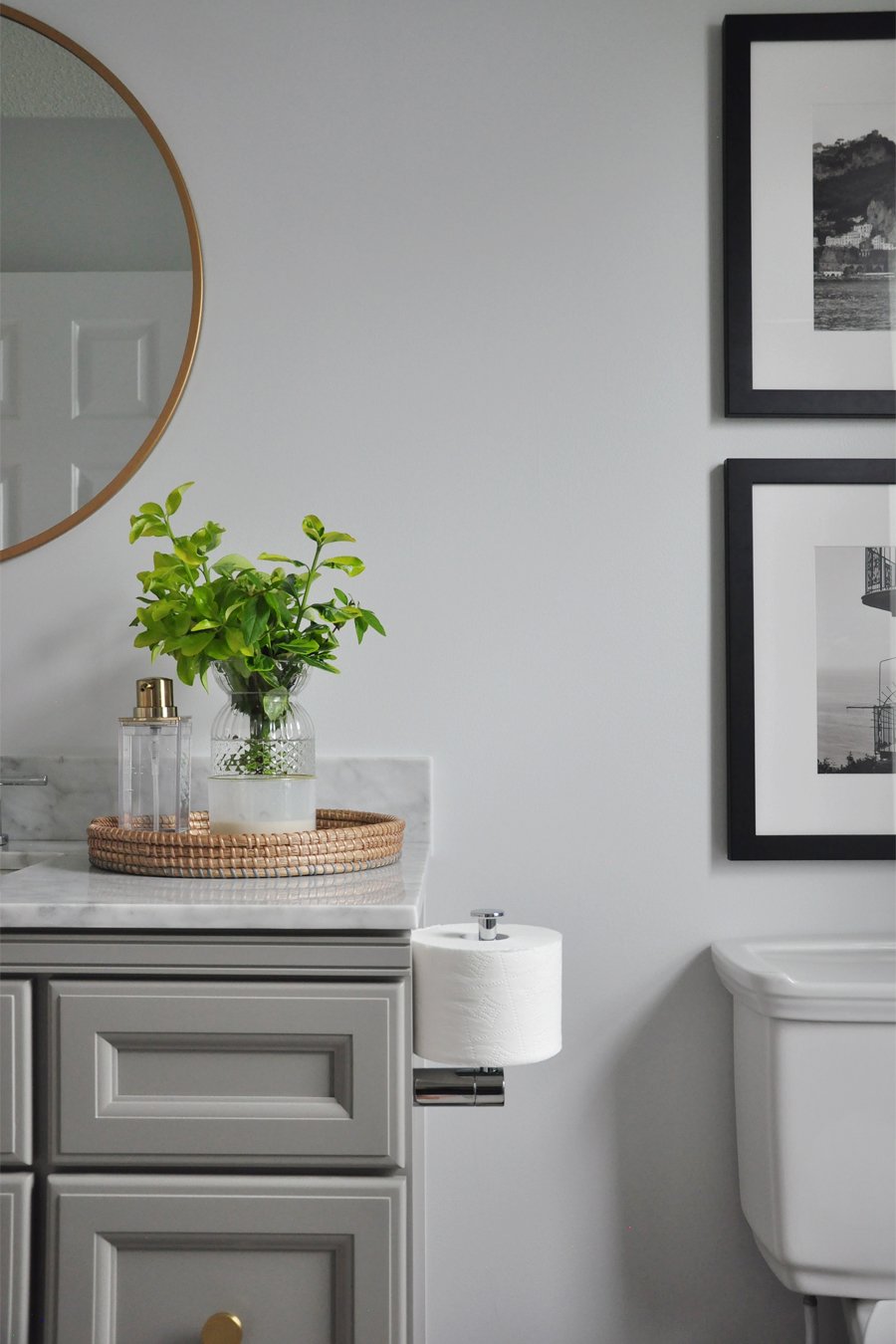 The original vanity was also shorter than standard; it was only 30″ tall, and although I’m not tall by any stretch of the imagination (5’5″), I found it so uncomfortable! All that to say, it was not functional nor pretty and thus needed an upgrade. 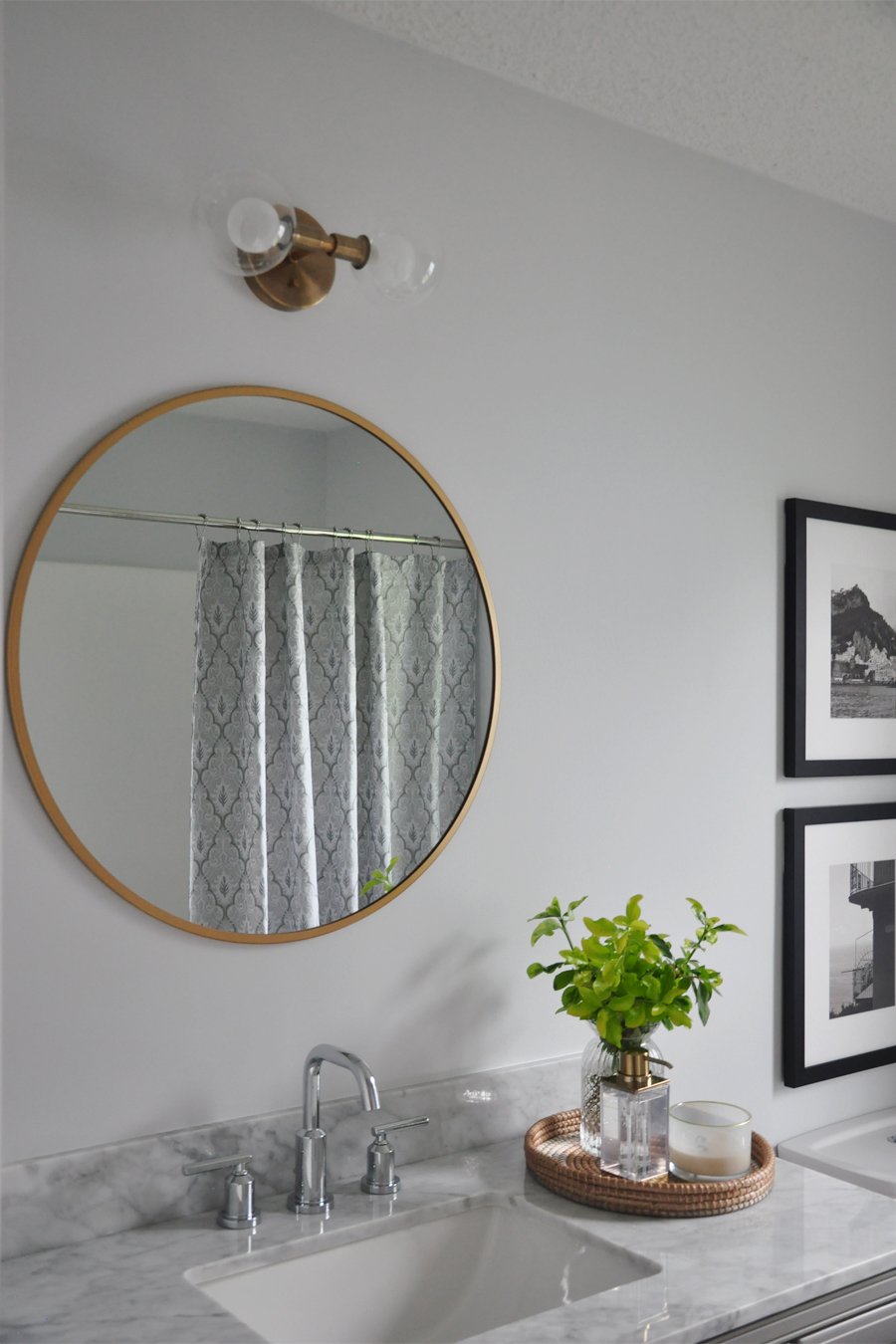 We chose a classic Carrara marble vanity top, which beautifully complements any color palette and style. 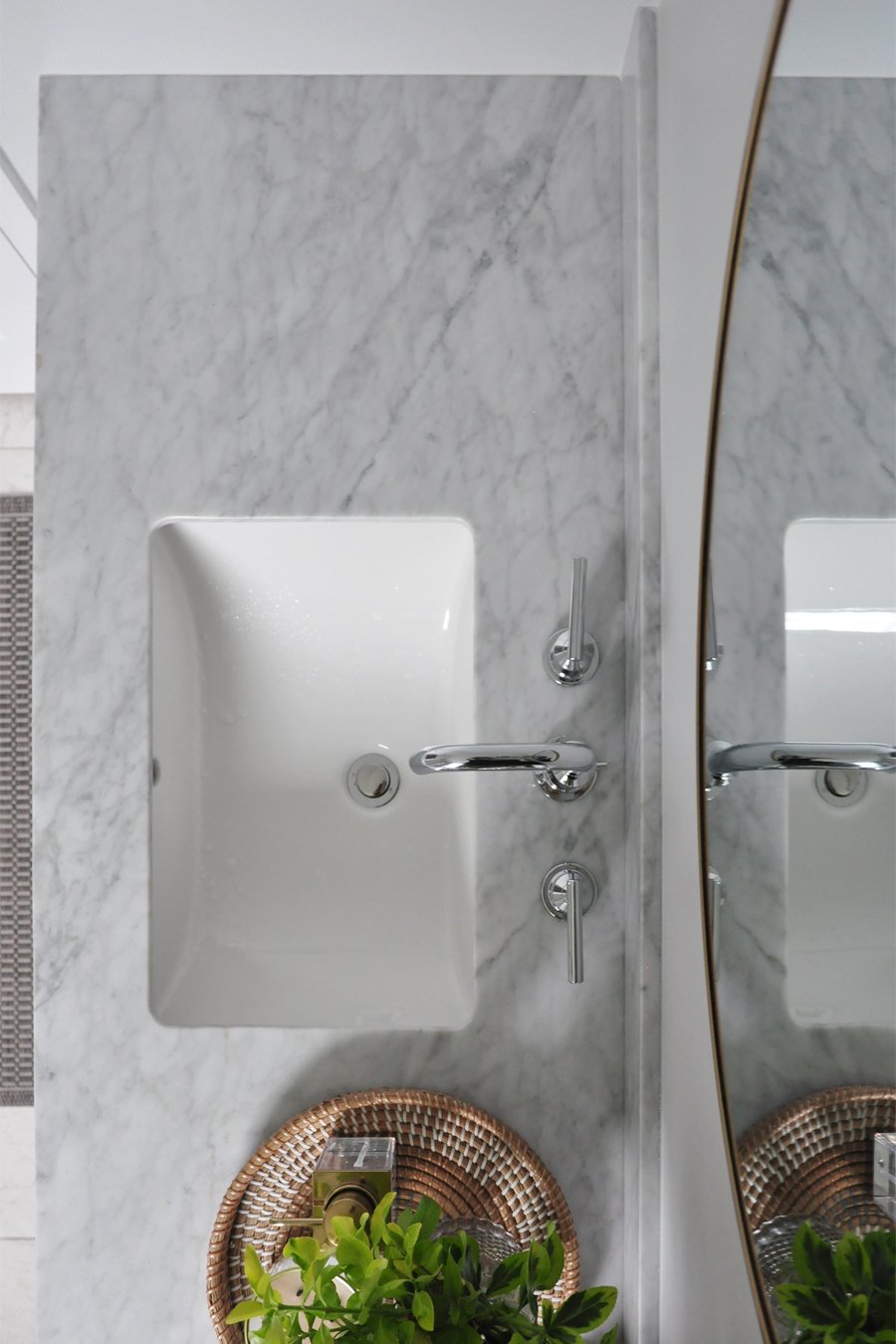 I opted for Moen’s “Gibson” faucet for its streamlined, luxe appearance. The design mimics the look of exposed piping, but the arched spout adds just the right touch of curves. 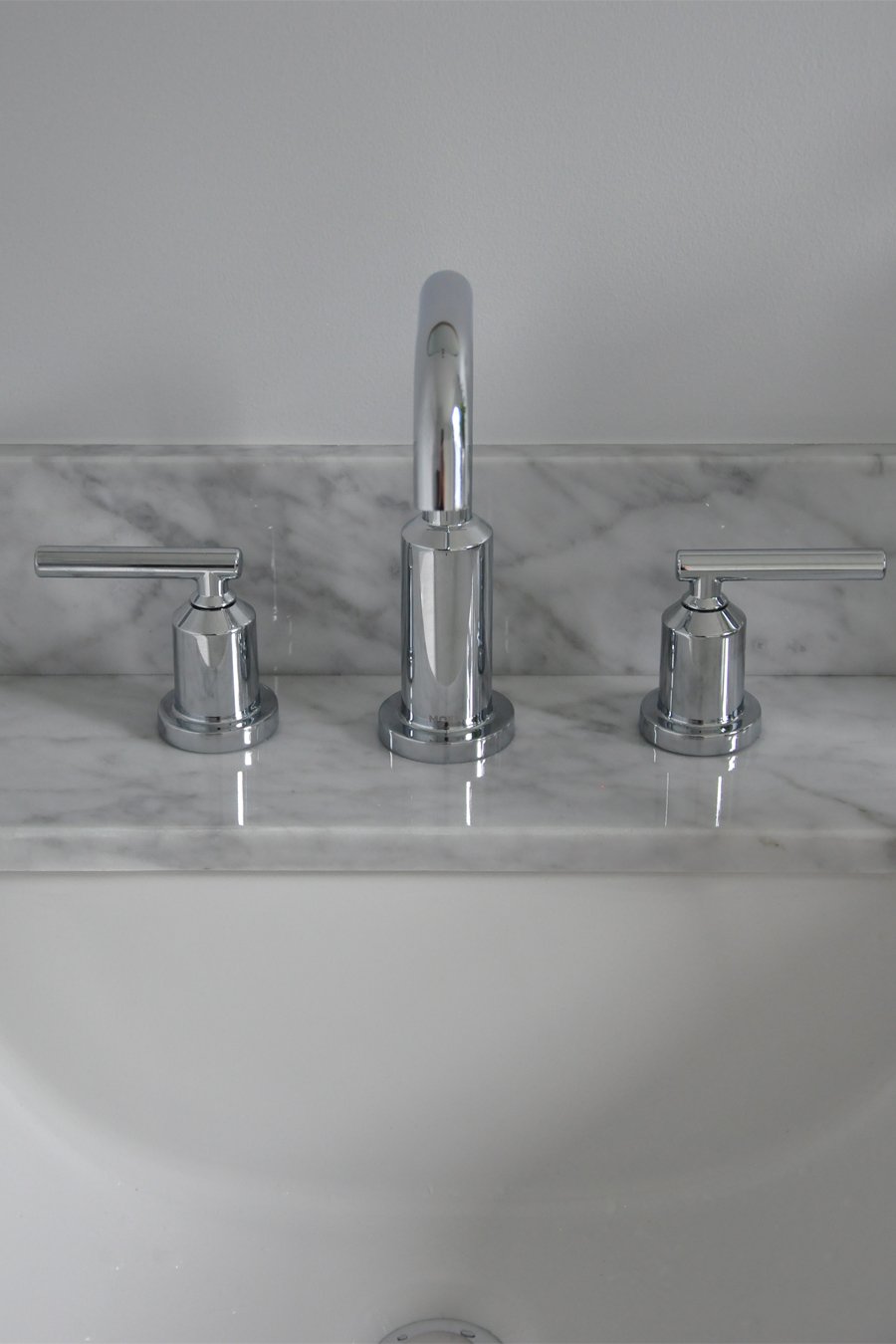 For the mirror I chose a classic round, brass option. Although it’s not groundbreaking in terms of design, it works especially well here because it brings a bit of feminine lines to the otherwise masculine and streamlined space. Ultimately, to maximize the budget, I chose a mirror I already owned. 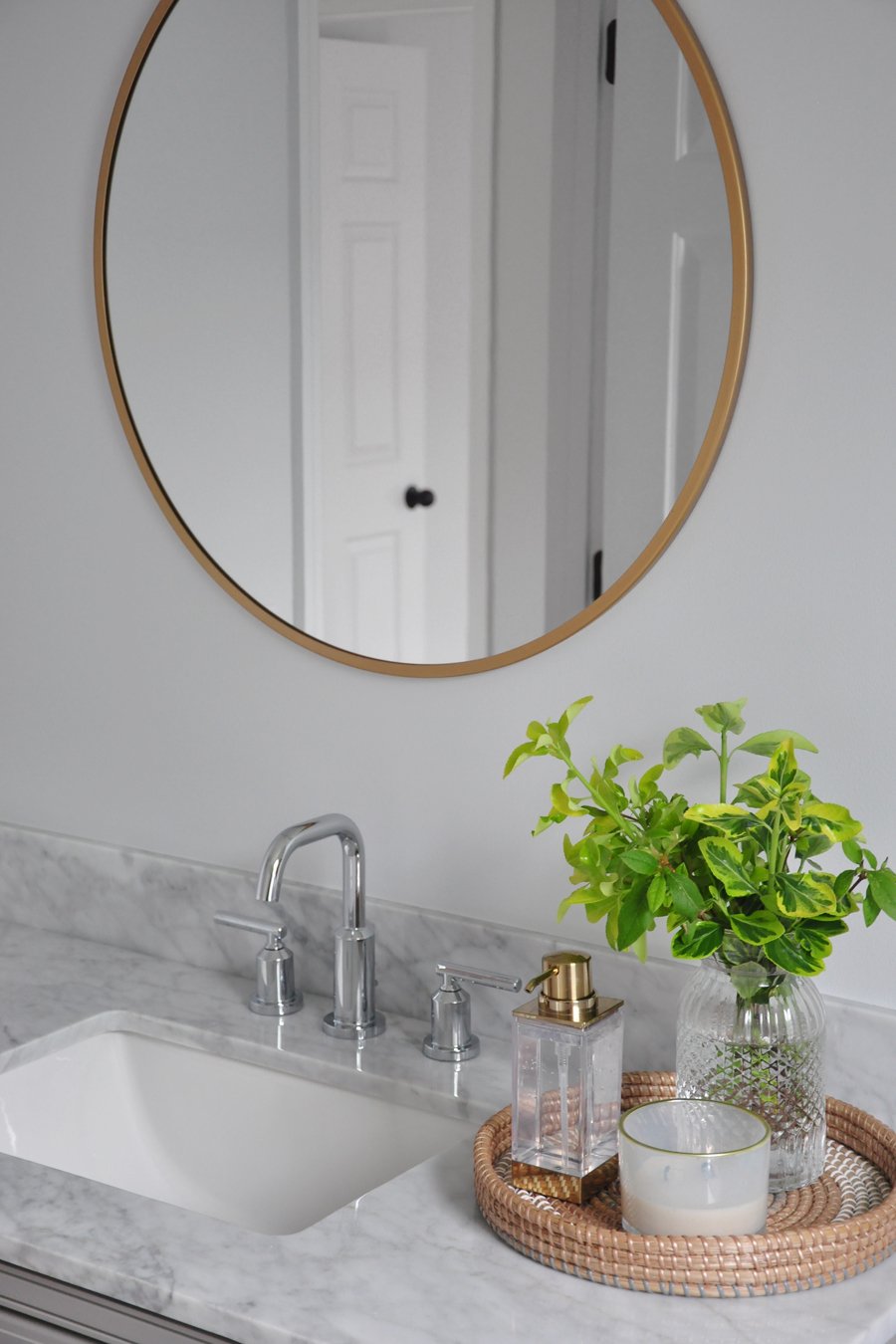 I considered many different shapes of mirrors, but I knew from the start that the finish needed to be brass to tie in the cabinet hardware and sconces. 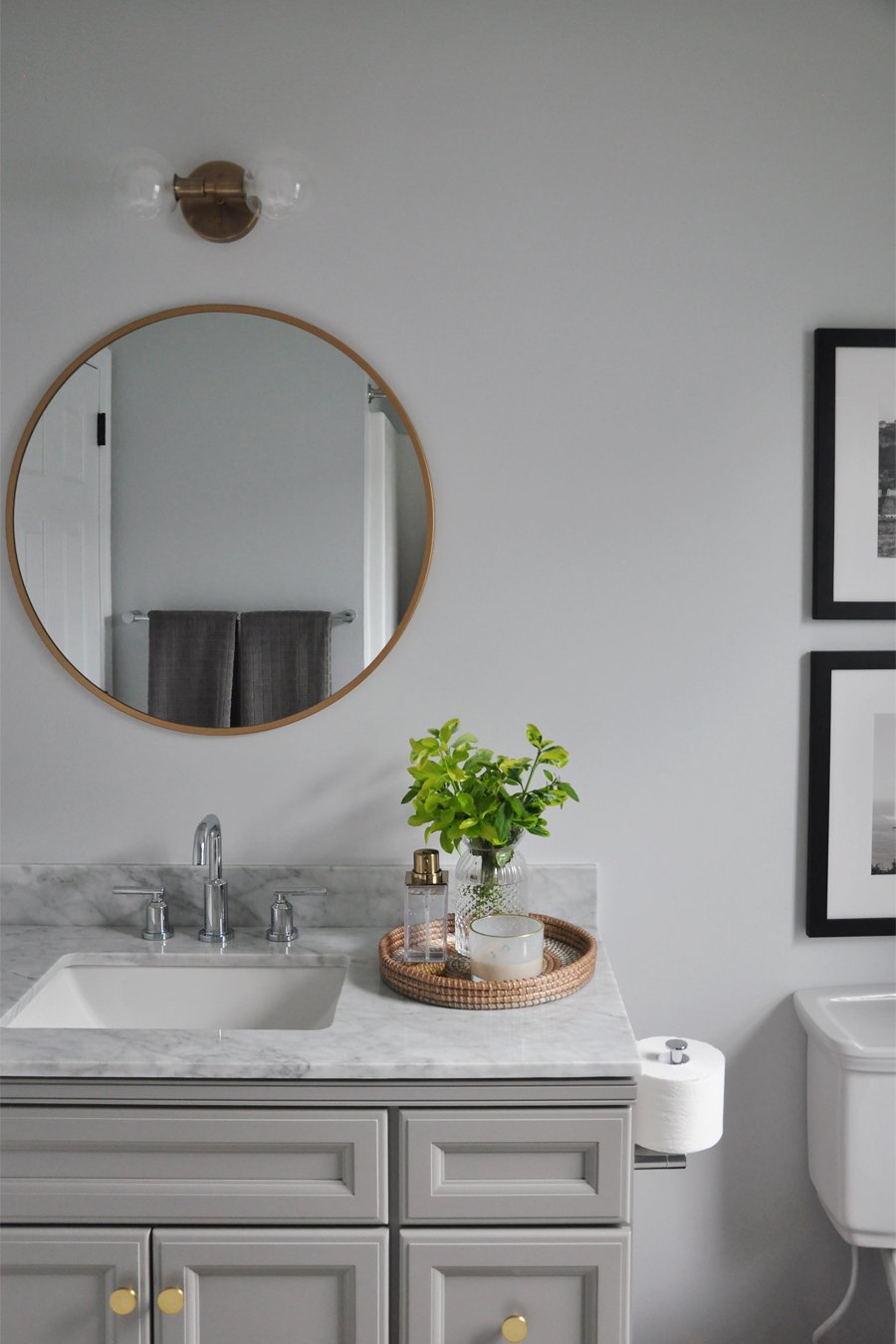 Speaking of sconces, the ones here are such a great find! The finish is a perfect brass, and they give off great, diffused light because of their inner opaque globe. Every time I’ve shared these sconces on Instagram, I get a dozen messages asking where they’re from! They look so much more expensive than they actually are. In fact, I liked them so much, I used them in the master bathroom reno, too. 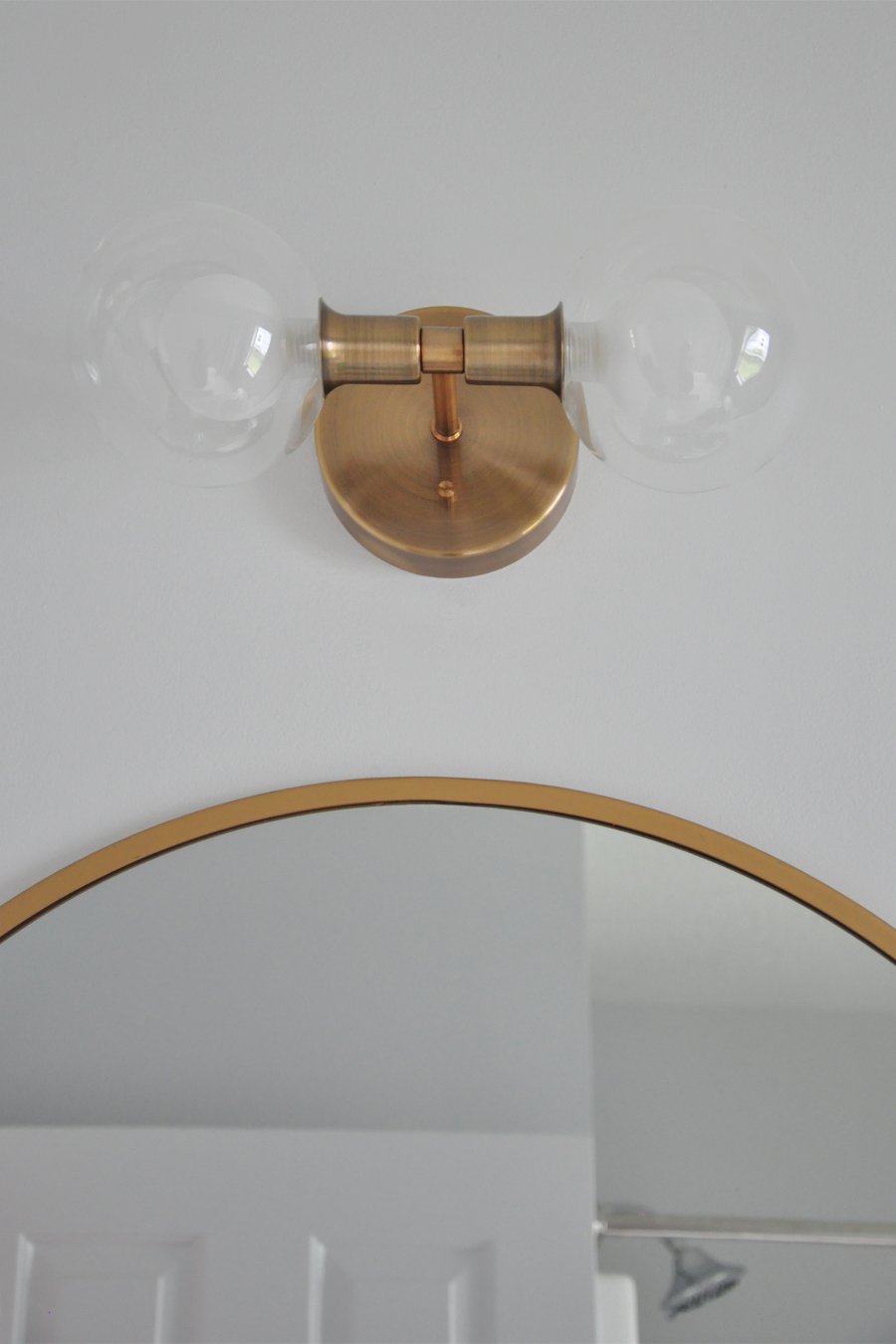 Let’s talk about the toilet.

Now, that’s a sentence I never thought I’d write! But this one deserves some attention. We kept the existing toilet – but not just for budget’s sake. I actually really like how it looks! The shape is so clean and classic, it has high-efficiency dual flush option, and the elongated bowl is positioned at a convenient height for extra comfort. 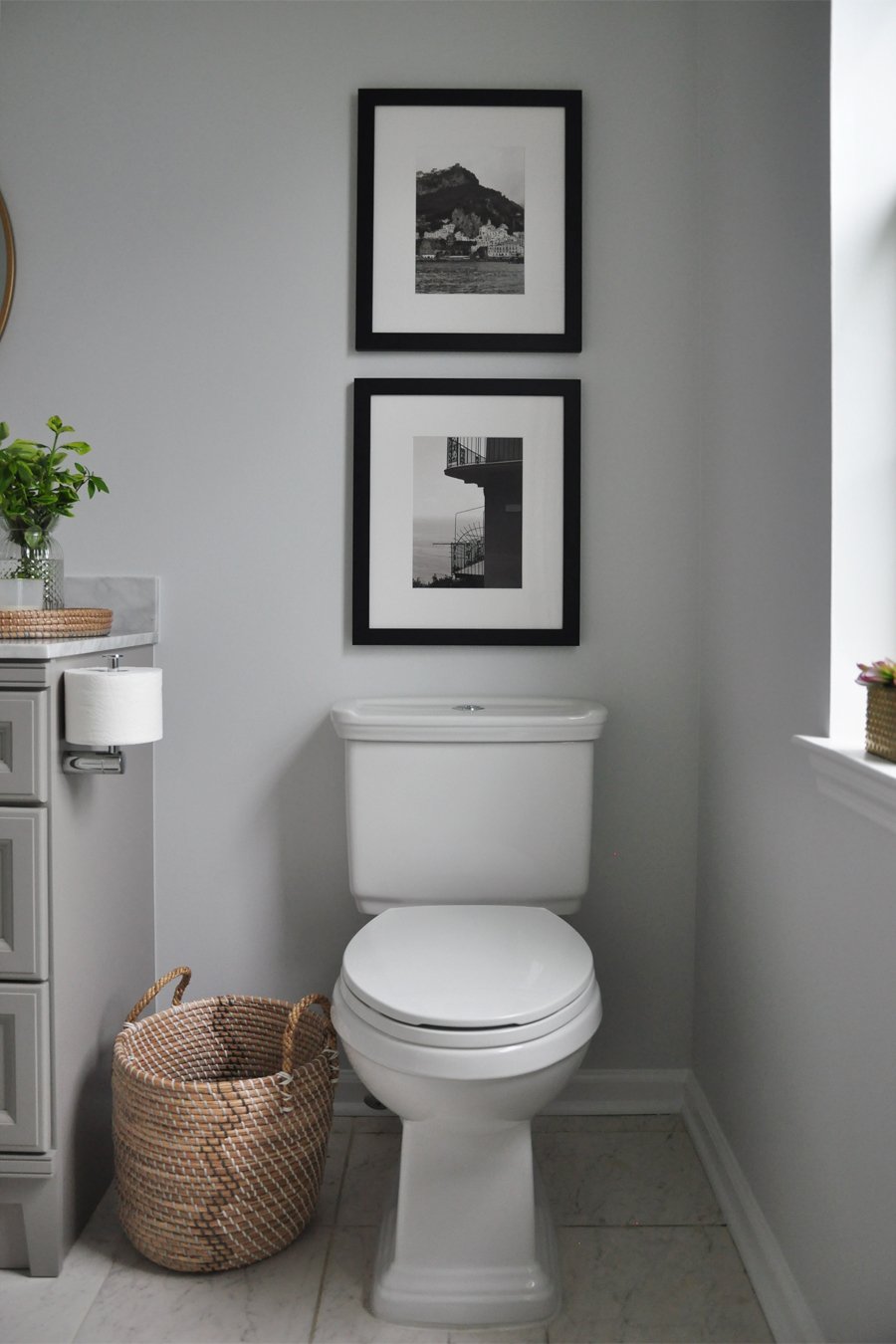 The toilet paper holder is a work of art, really. It’s from Moen’s “Align” collection, and I’m not even going to tell you how long I spent choosing “the one.” 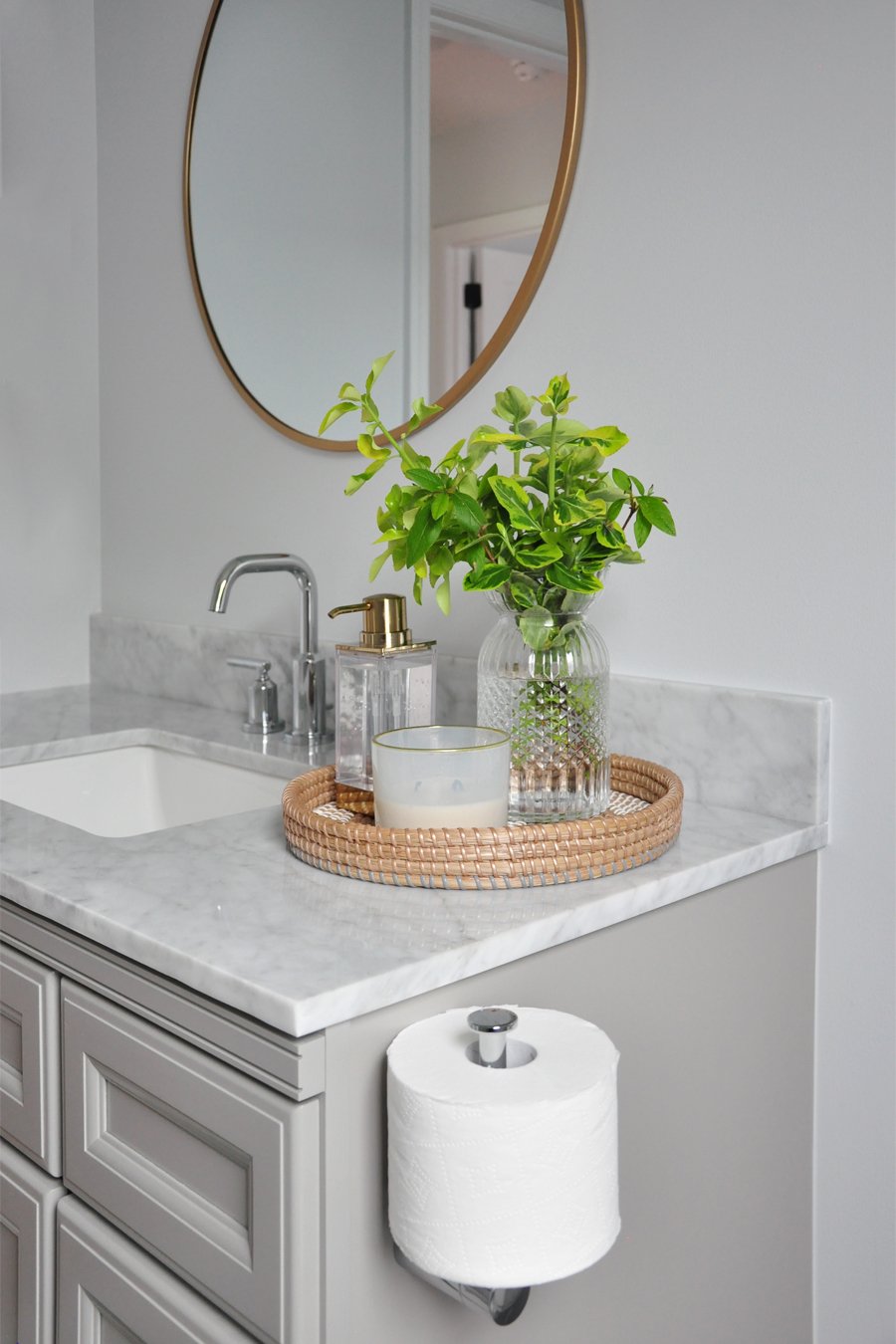 The towel bar is from the same collection, and I just love its streamlined, modern look! 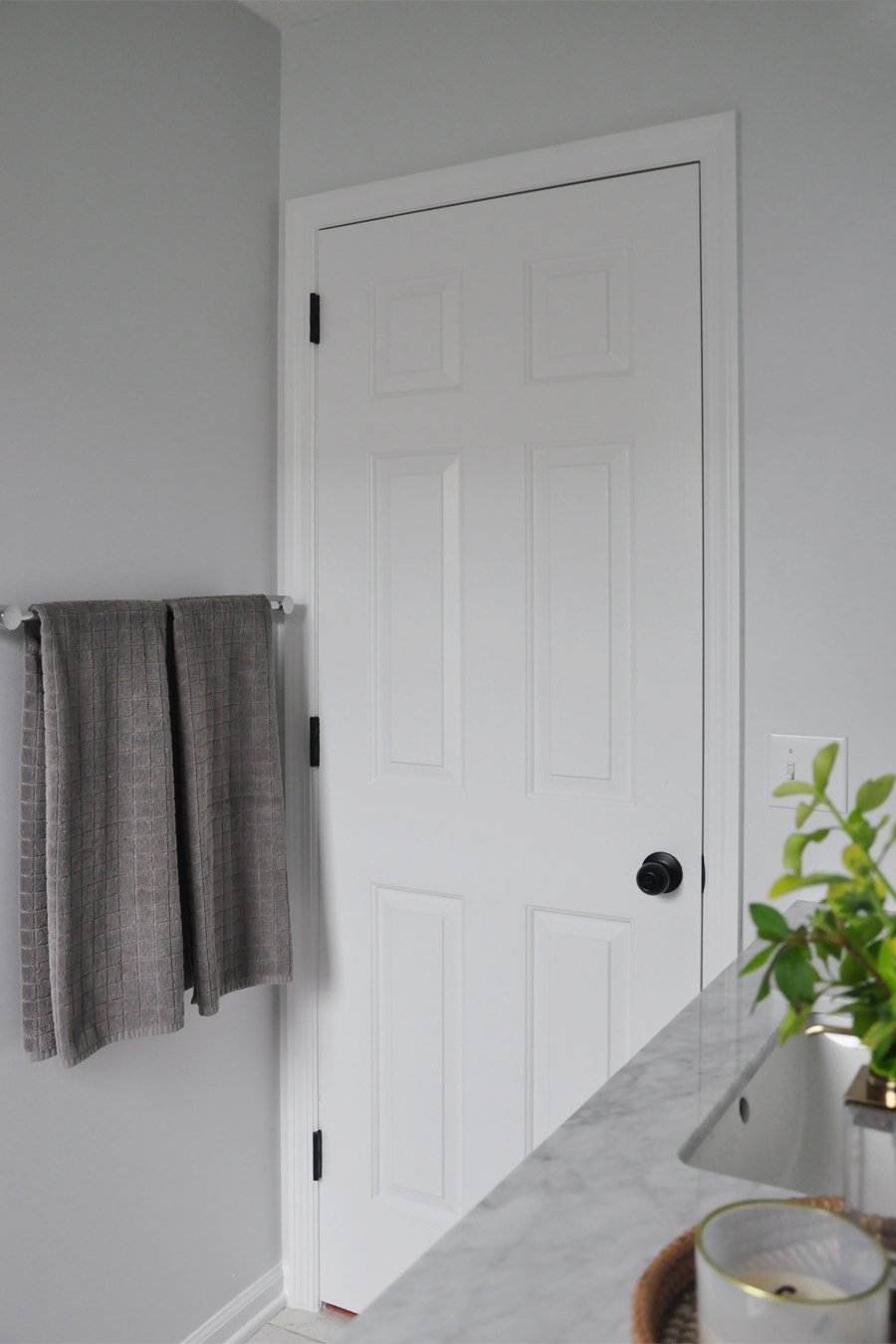 As far as accessories, I stacked two prints above the toilet, which not only adds visual interest to the room but also elongates it. They’re actually the same prints that used to hang in our living room at the bungalow; I specifically chose two that had water in it as a nod to the location where they were being installed. 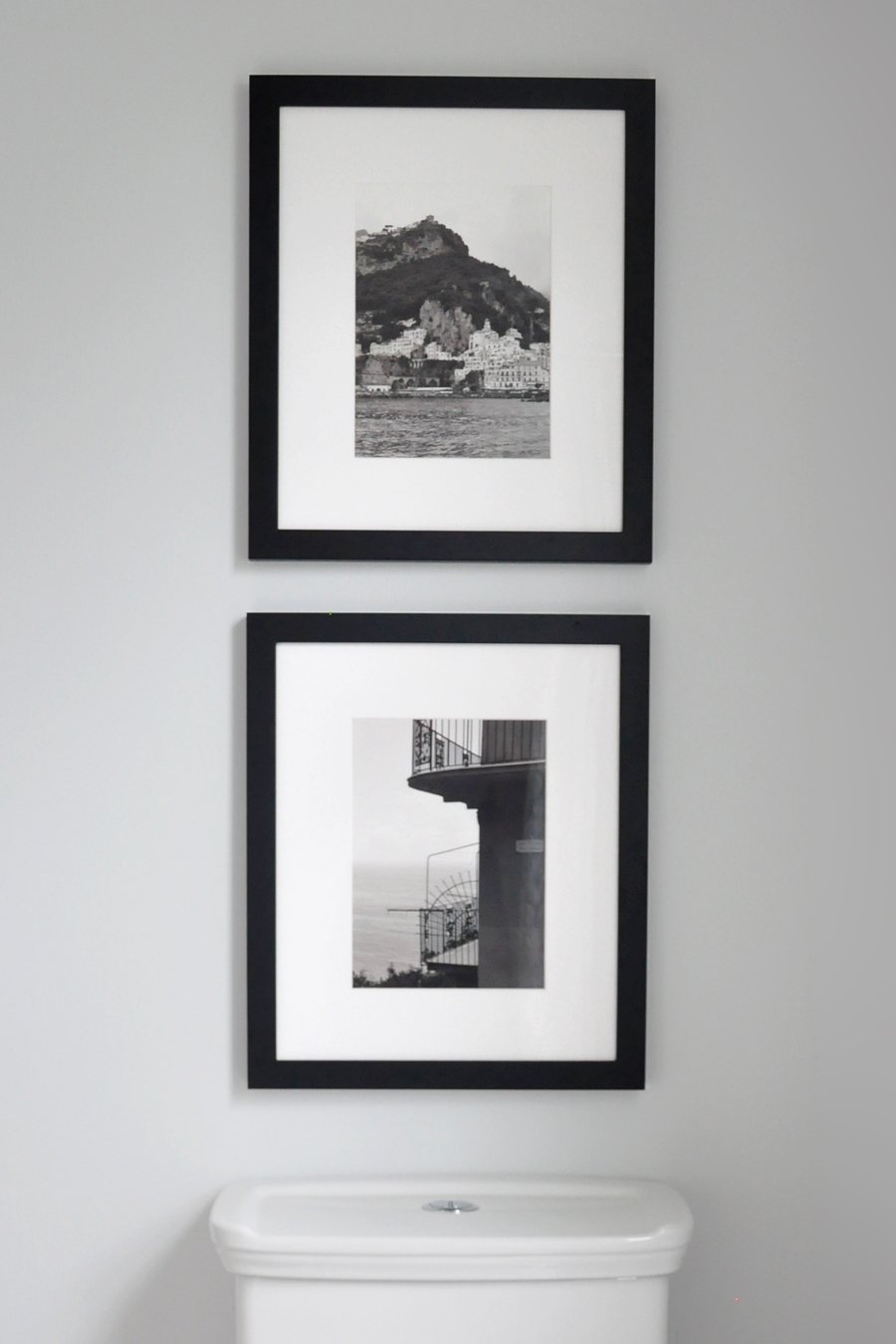 I added a woven tray to house the soap dispenser, candle and vase of greenery. Baskets are my go-to styling trick for when I want to add texture and warmth to a room. It’s such a nice, organic contrast to the white, black and gray aesthetic. 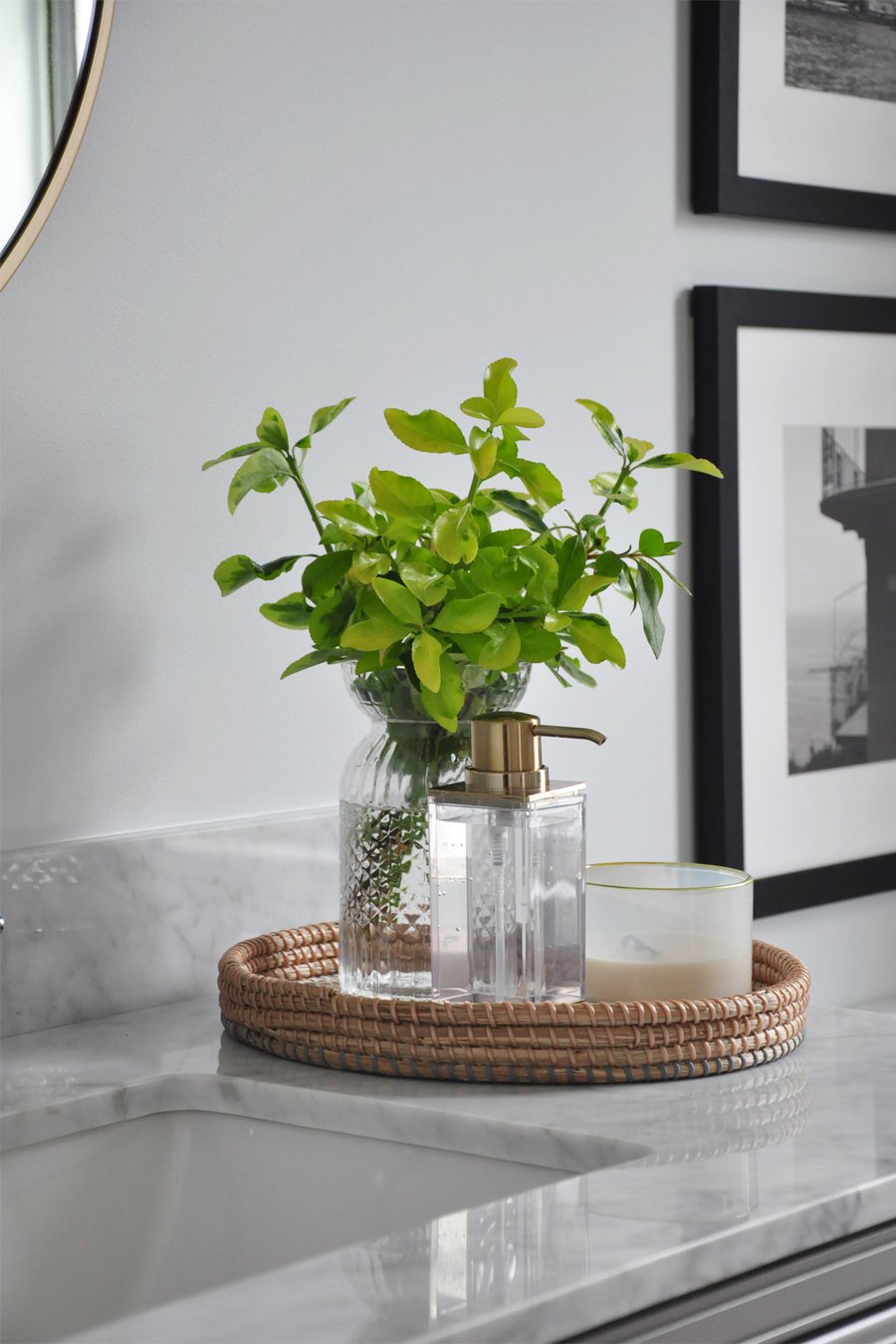 If you’ve stuck around this long, thank you! I so appreciate all of you who follow along with our renovating adventures and encourage us along the way.

As always, I love hearing your feedback in the comment section, below.

Raise your hand if you grew up with scriptures dis

Can you believe more than eight months have passed since I last shared about our Greystone House?! Even then, it was just the initial […]

END_OF_DOCUMENT_TOKEN_TO_BE_REPLACED

Raise your hand if you grew up with scriptures displayed around your house as artwork. I know I did – both in Ukraine and […]