This week we’re celebrating a year of home ownership, which, in our case, has been 12 months of renovations while we continue living in our rental.

We bought our property in July of last year. A day or two later, I made the announcement on Instagram, and that is how this adventure began. I had no idea what we were getting ourselves into at that time, but it was a very, very exciting undertaking.

Hard to believe that an entire year has passed, and we have yet to move into the space. Gutting and completely re-building a house that is nearly 90 years old – even worse, one that was previously abandoned for 20 years – has proven to be a much bigger, more stressful task than either one of us could’ve ever imagined.

Even though we’re not finished yet and have about a month or so before we’ll even attempt moving in, I wanted to commemorate this special time with an epic post down memory lane – not so much a look at “BEFORE” and “AFTER” but rather the sequence of projects we accomplished in the past 12 months. I’ll be sharing the many, many lessons I learned and discovered about renovating, about myself, about our marriage and life in general in a later post, but today we’re simply enjoying the progress – all 12 months’ worth of progress – and looking at the projects we have left to finish before we can move.

When we first bought the house, or as I’ve lovingly nicknamed it, the #StrelkovBungalow, it was quite a sight. In fact, to this day, when friends and acquaintances ask to see “BEFORE” photos, they cannot believe that it is the same house. 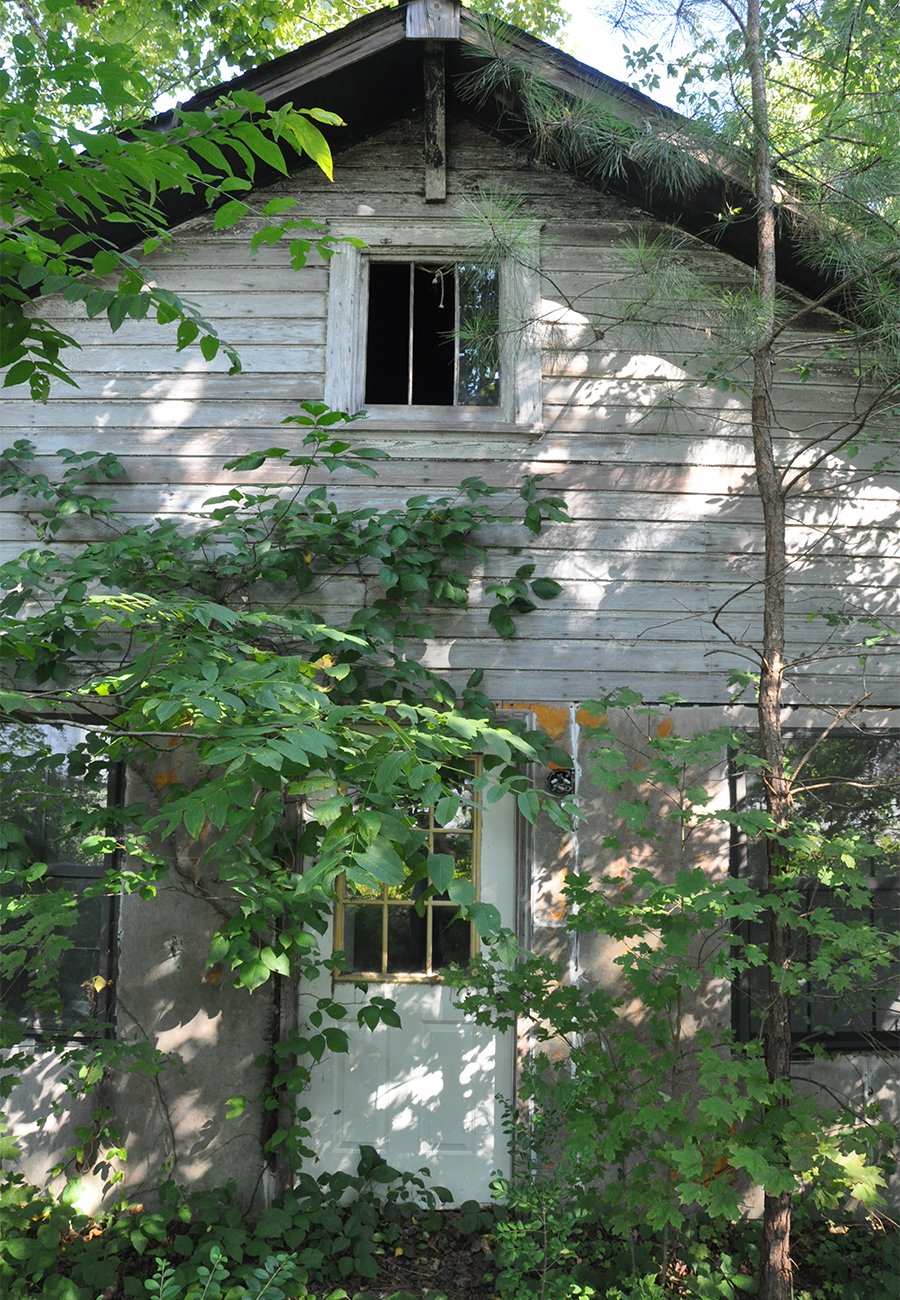 First item on the agenda was to clear away the overgrown mess and chop down some – not all – of the trees to give us ample space where we could work. With the greenery went the fairytale-like allure of the house, and we were left with a decrepit shack, basically, and a slight feeling of panic, like, “What did we get ourselves into…?” 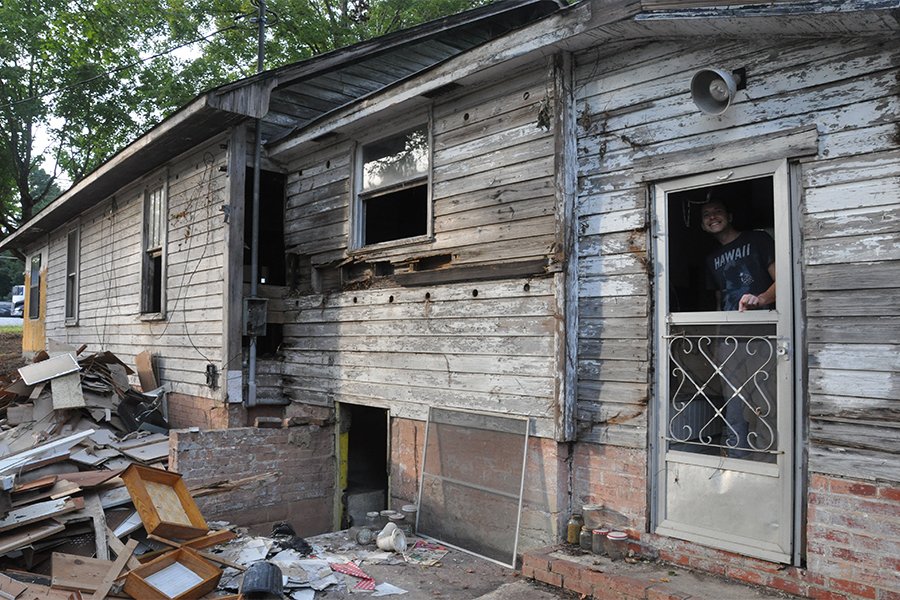 We basically gathered any and all friends and family that were willing to come out one Saturday to help us with the demolition and trash removal. I remember showing up with lunch for the group and being totally shocked by just how many people showed up to help. To this day, I cannot recall that experience without getting a little teary-eyed – and I say that not in any cliche, general way but because I was truly moved by our circle of community that was willing to put their own Saturday plans on hold to come out and get dirty to help us out. 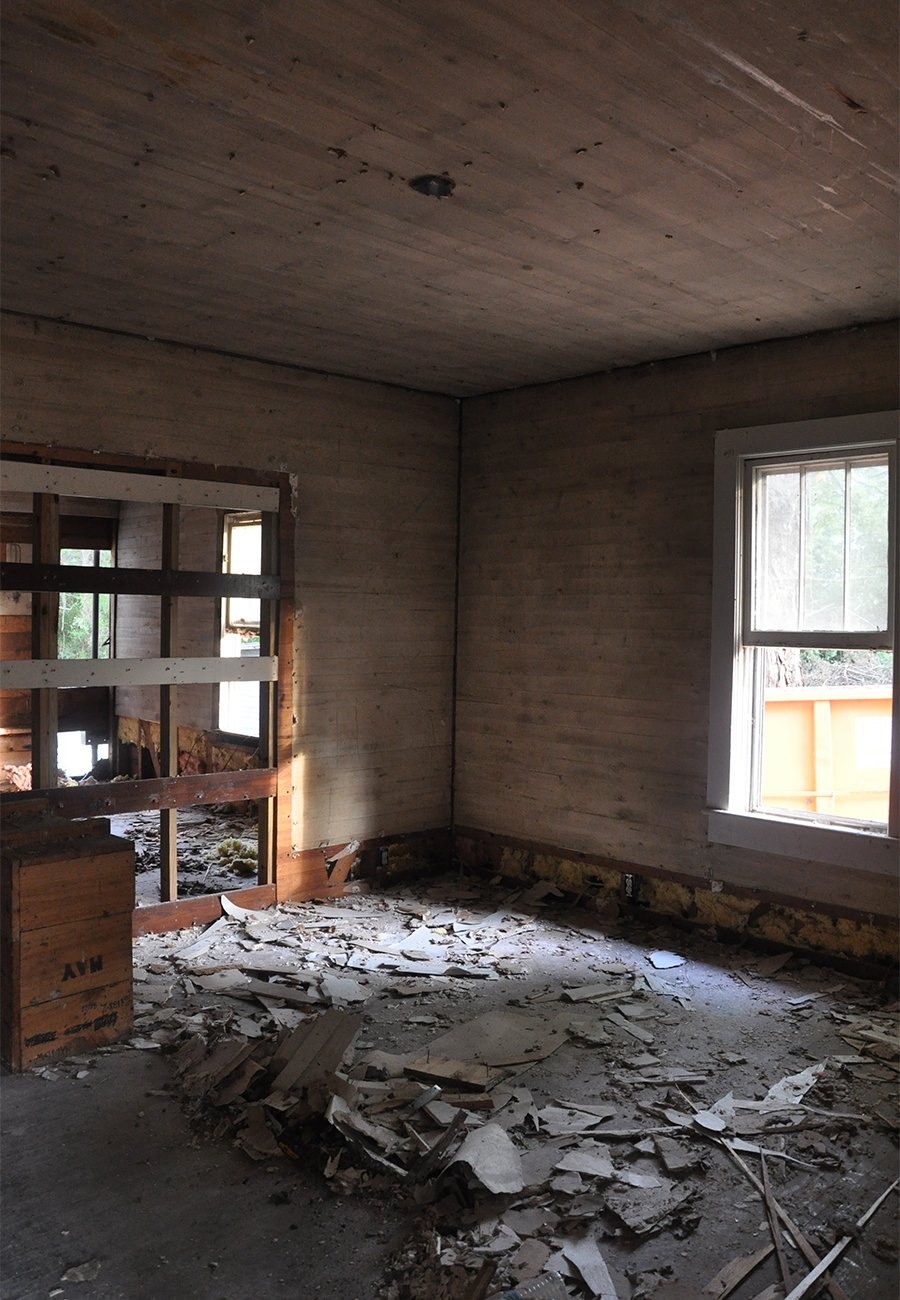 While some worked on the outside, others began demolishing the inside and removing everything that was decaying, damaged or otherwise would be replaced, including the kitchen cabinets, linoleum flooring, bathroom fixtures, decaying drywall, etc.

One of the first projects we tackled was the roof. We didn’t want our hard work on the inside being rained on and ruined. We then began reframing the layout, tearing down unnecessary walls and building up new ones to create a floor plan that made better sense than the original. 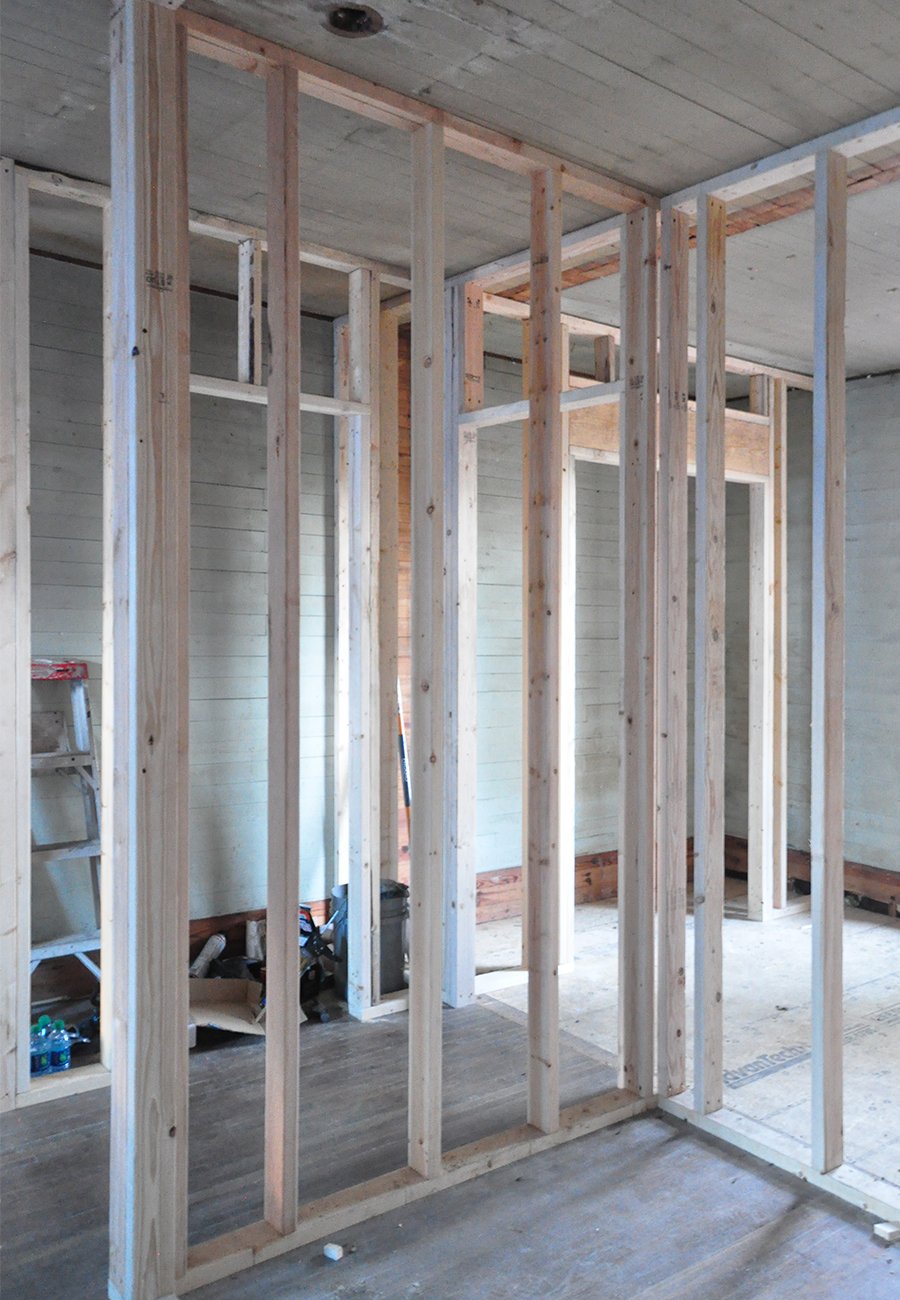 During this time, we also dealt with the plumbing, heating, A/C and lighting, all of which had to be installed anew. Like I said, the house was abandoned for 20 years before we bought it, so anything of worth, including wiring, pipes, etc. was long-gone by the time we got our hands on it.

Unfortunately I couldn’t get photos of some of these projects, even though I tried. You see, we had gotten rid of the old windows during the demolition steps but had yet to install new ones, so our windows were covered with heavy, blue tarp – which eliminated any natural light from the house, casting a dark, blue glow on everything. Although the electrical wiring had already been installed, the city hadn’t yet turned on the light, so we were working with construction work lights. All that to say, it was not an ideal setup for photoshoots. 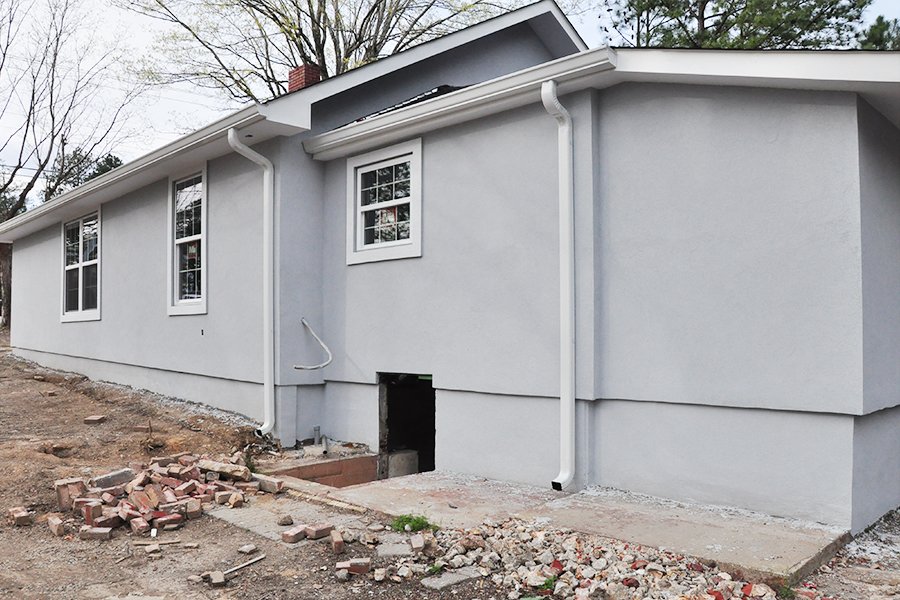 Once we installed windows, and began working on the stucco exterior, the house began to, once again, resemble a house, and the work was, once again, exciting because we could see obvious progress. 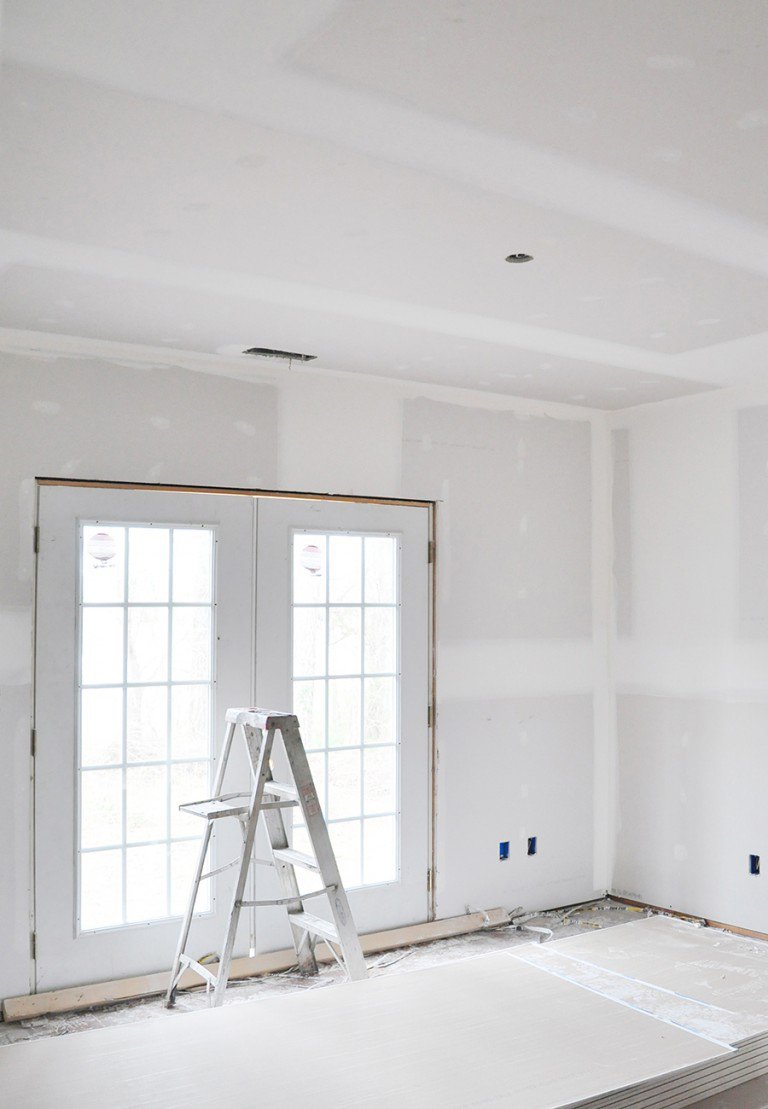 Afterwards came the drywall installation; spaces began resembling actual rooms, and the place suddenly lightened up. Primer and a coat of paint came next, and I remember stopping by the house just to sit and imagine what it’d be like to finally live there. 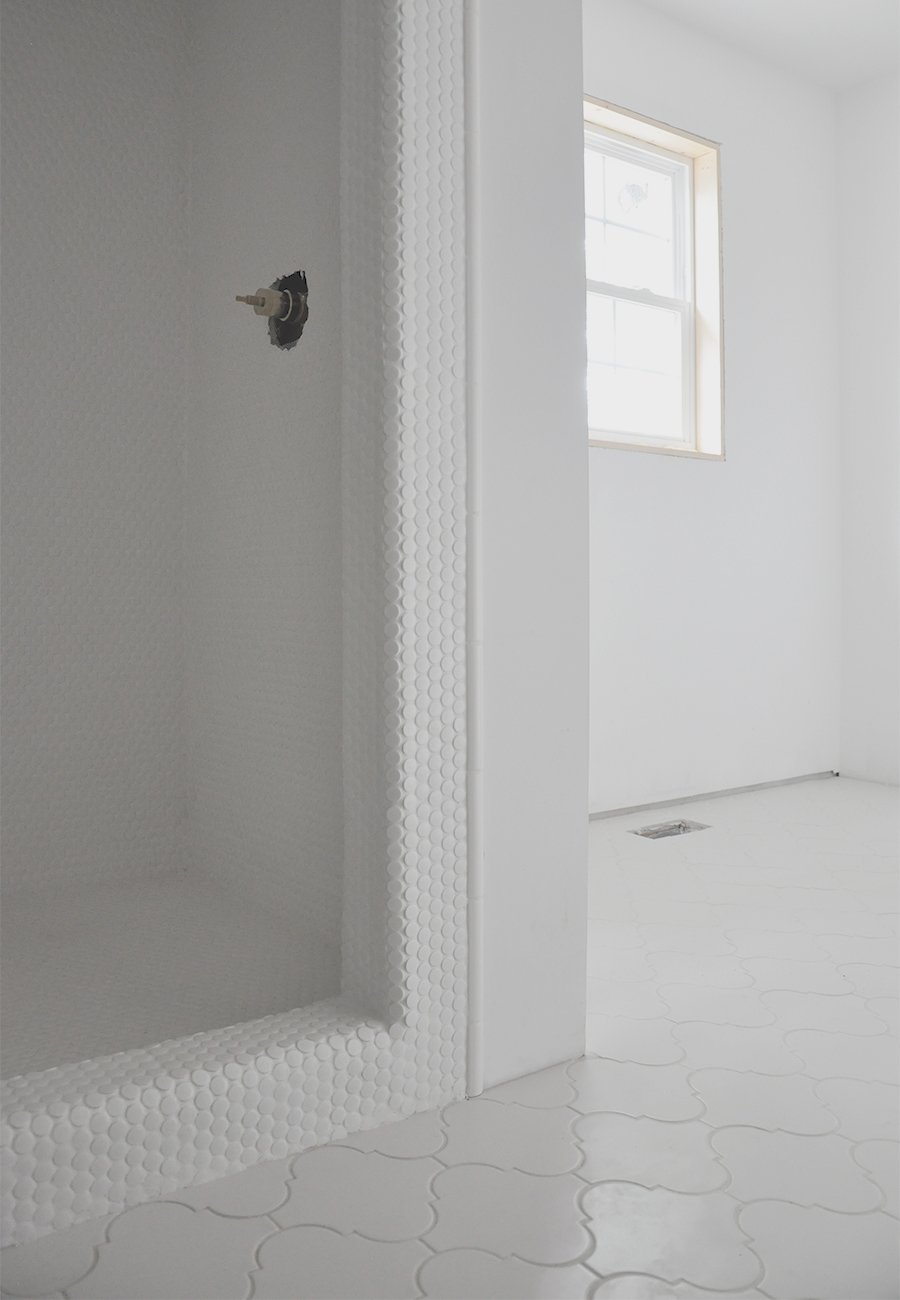 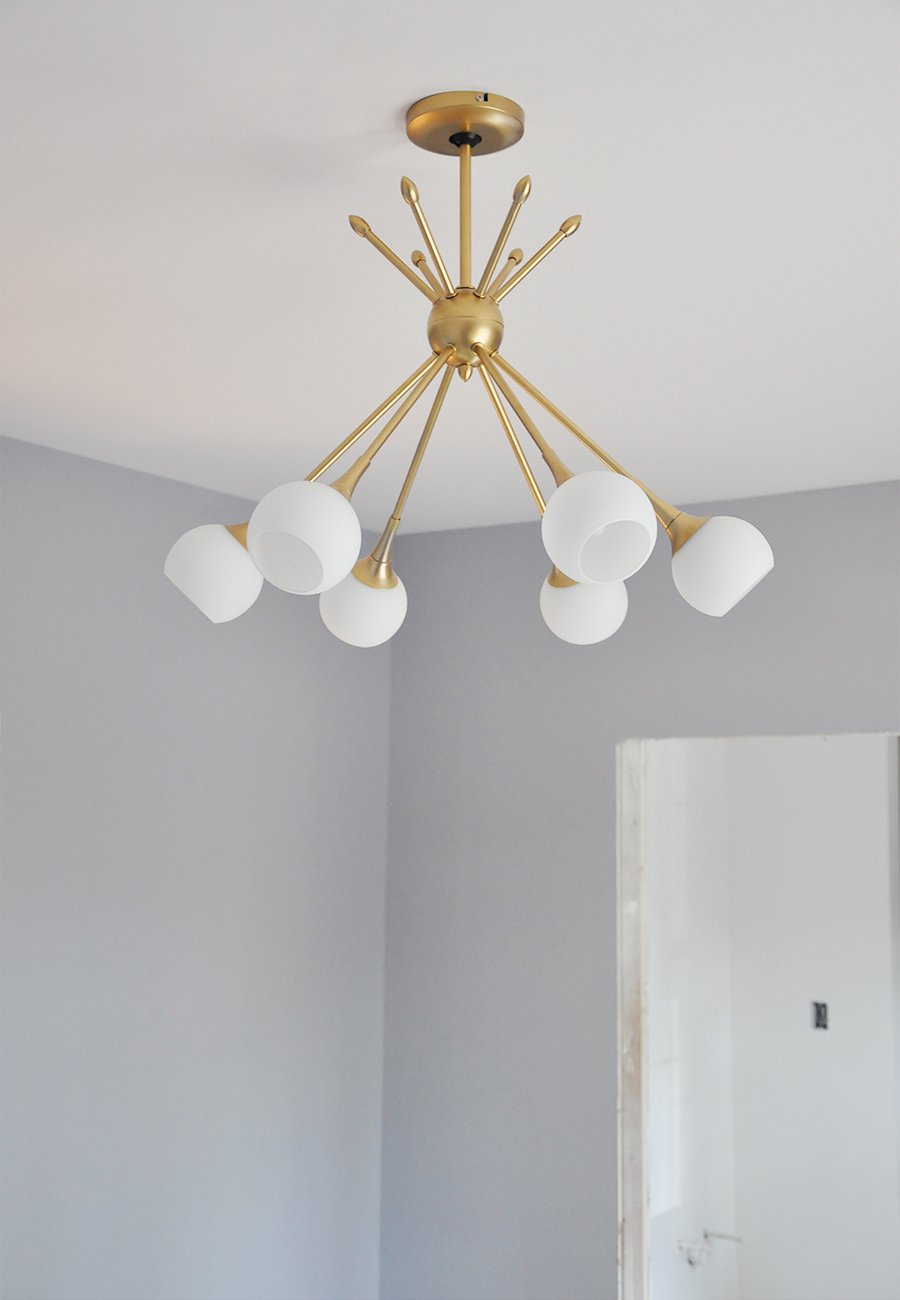 During this time, the city turned on the light, so we were finally able to work in normal, lighted conditions. Immediately, we began installing the few light fixtures we had sourced by that time. So true what they say about lighting being the jewelry of the room, because with light fixtures came personality, and you could finally begin imagining what all of it will look like. 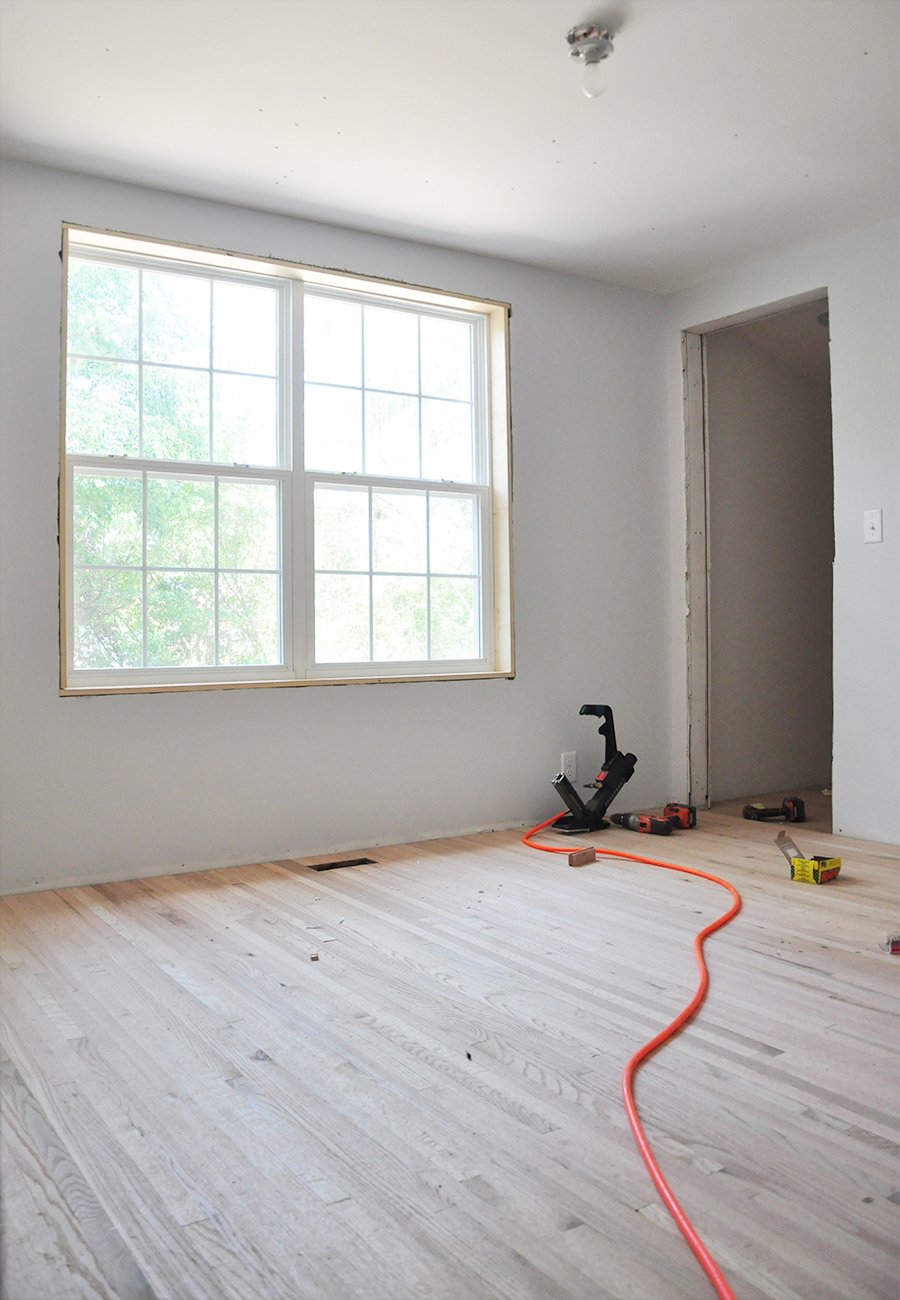 Hardwood floors were next on the list, which, although a bit of a nightmare to finish, really began tying the whole place together. By this time we had the kitchen cabinets delivered, and not wanting to have to move them into an outside shed, we began installing the top cabinets. 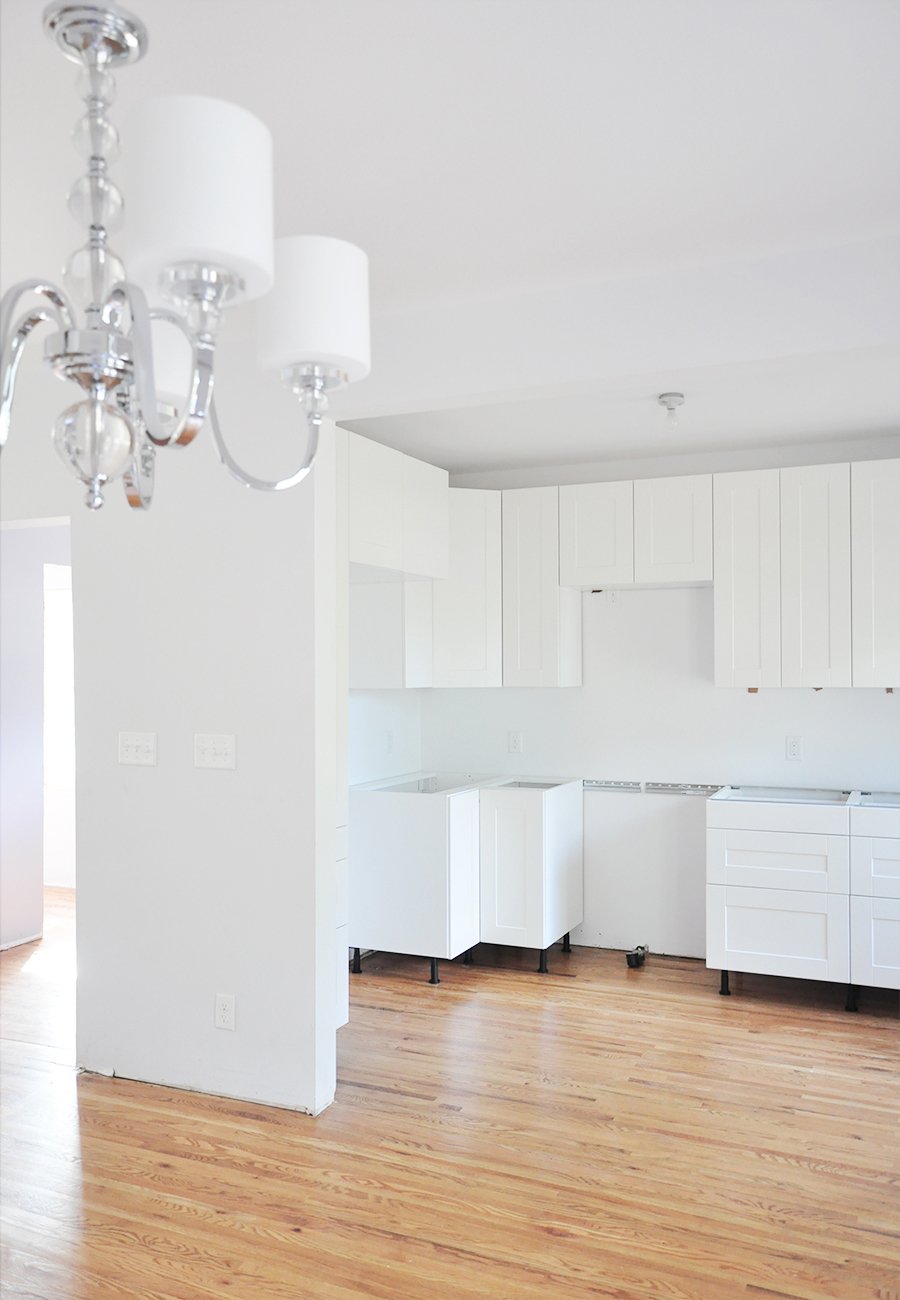 After the hardwood floors were installed, we finished assembling and building the remaining kitchen cabinets, which, by the way, are from IKEA. For anyone who has ever had to assemble furniture from IKEA, you likely already know that this great “bonding” project is that truly tests just how strong your marriage really is, but hey, we got through it, and we’re alive, and we still love each other, so I’d say we did quite well, ha! We even went on to build a kitchen island following a tutorial I had found on the Internet. Truth be told, a vast majority of renovations was the result of online tutorials.

Next came the doors and the trim, which is currently being finished up, along with the fireplace makeover, which you may have caught glimpses of on Snapchat. As for what else we have left – a question that is quite popular with our friends these days – the countertops and sink are being installed within the next week or so. Then we’ve still got the appliances, the kitchen backsplash, bathroom vanities and toilets, the remaining lighting fixtures, another coat of paint everywhere, front and side patios, the deck and landscaping. Sounds easy-breezy, am I right?

Well, this post definitely reached an epic length, so if you’ve made it this far, thank you! I truly appreciate all of you who have been so encouraging throughout this process, because God knows, it’s been quite the experience, and I don’t know that we’d be able to do it if it wasn’t for the support of friends and family.

I’ll be back oh-so-soon with more updates from the magical world of bungalow renovations, and in the meantime, please keep your fingers (and toes) crossed for us to make lots of progress over the next few weeks.

To catch up on what we’ve renovated so far, you can browse “Our Bungalow Renovation” series. To see more “BEFORE” photos of the house, check out: