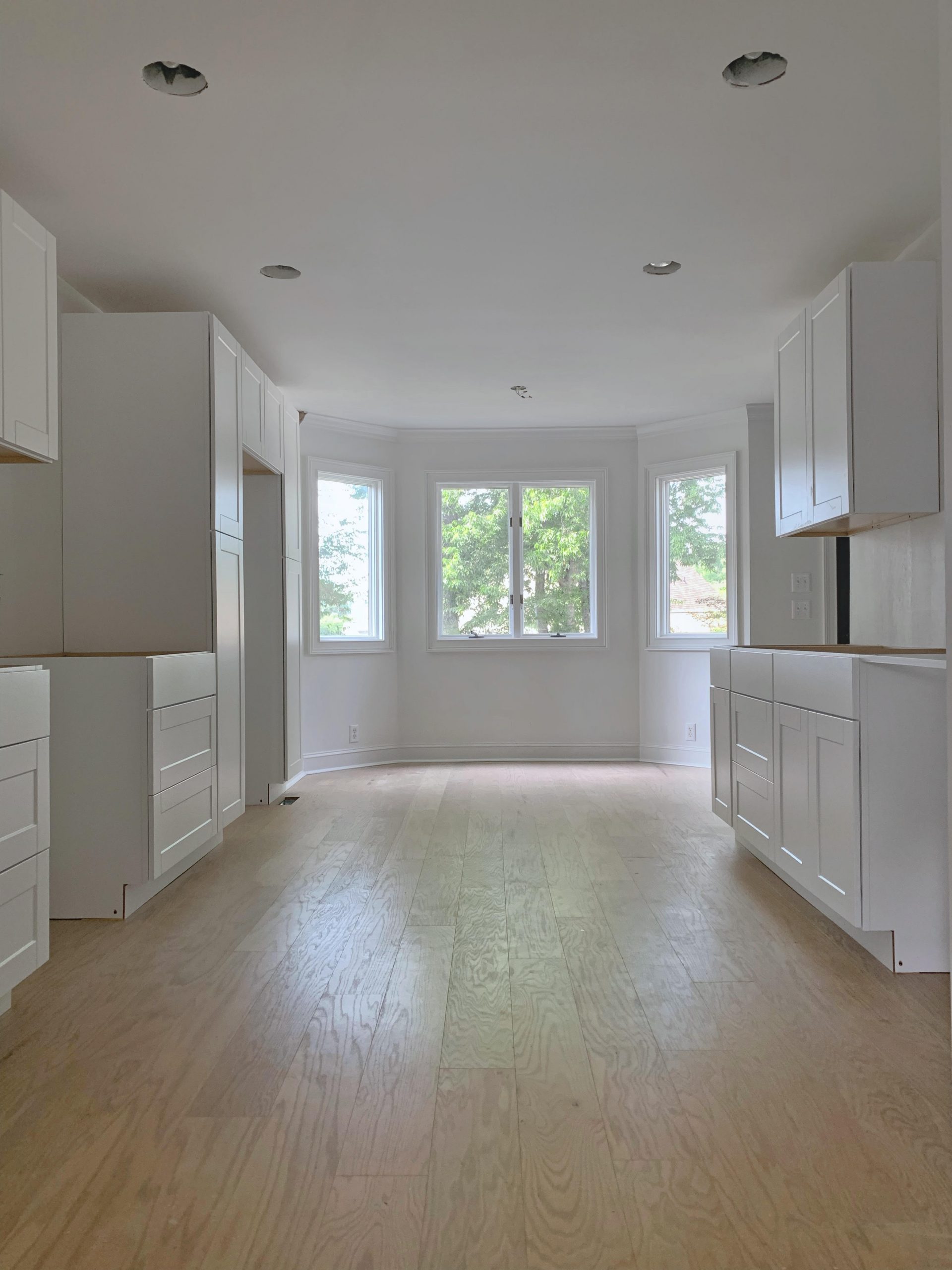 We’ve been test-driving our newly redesigned kitchen layout, above, with nightly dance parties with the kiddos and playing tag in all the vast, open space. There’s so much of it now!

Can you even believe this was the same kitchen just a couple months prior? 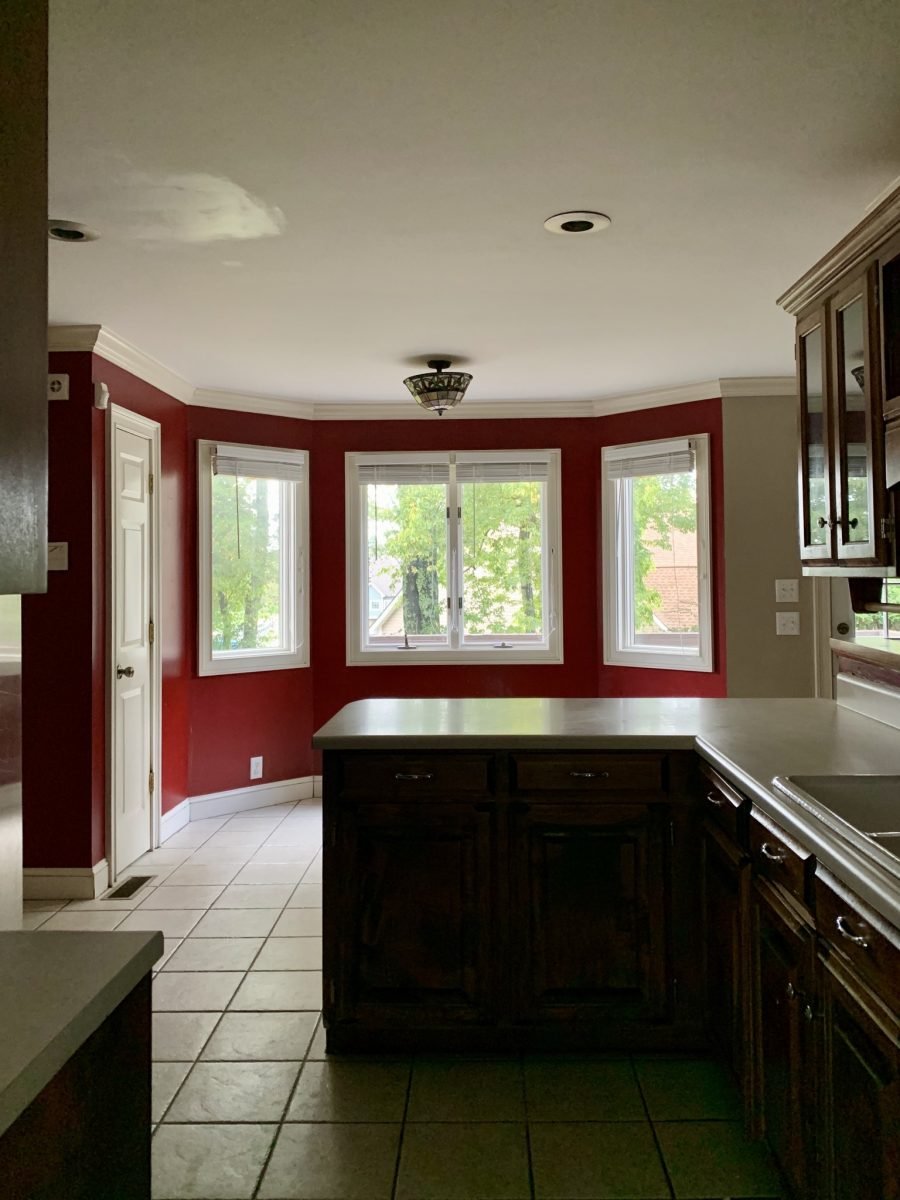 On more than one occasion my almost-four-year-old has told me, “Mama, this kitchen is so big and beautiful!”

She may not understand design or space planning, but even a young child can feel the significant improvements in this space. How amazing is that?

We’re inching towards the finishing line with the Greenfield kitchen renovation. By the way, are you following all the glorious daily updates on Instagram?! You better be. If this transformation doesn’t make you believe in miracles, I don’t know what will.

The original kitchen layout left a lot to be desired. For a house of this size and in this price range, you’d expect the kitchen to be much bigger and far more grand – and that’s what I set out to change. The main issues I needed to address were:

Before we dive into design solutions, take a look at the original floorplan compared to the redesigned one. Seeing the two side by side definitely helps visualize the space better as we analyze the layout issues. 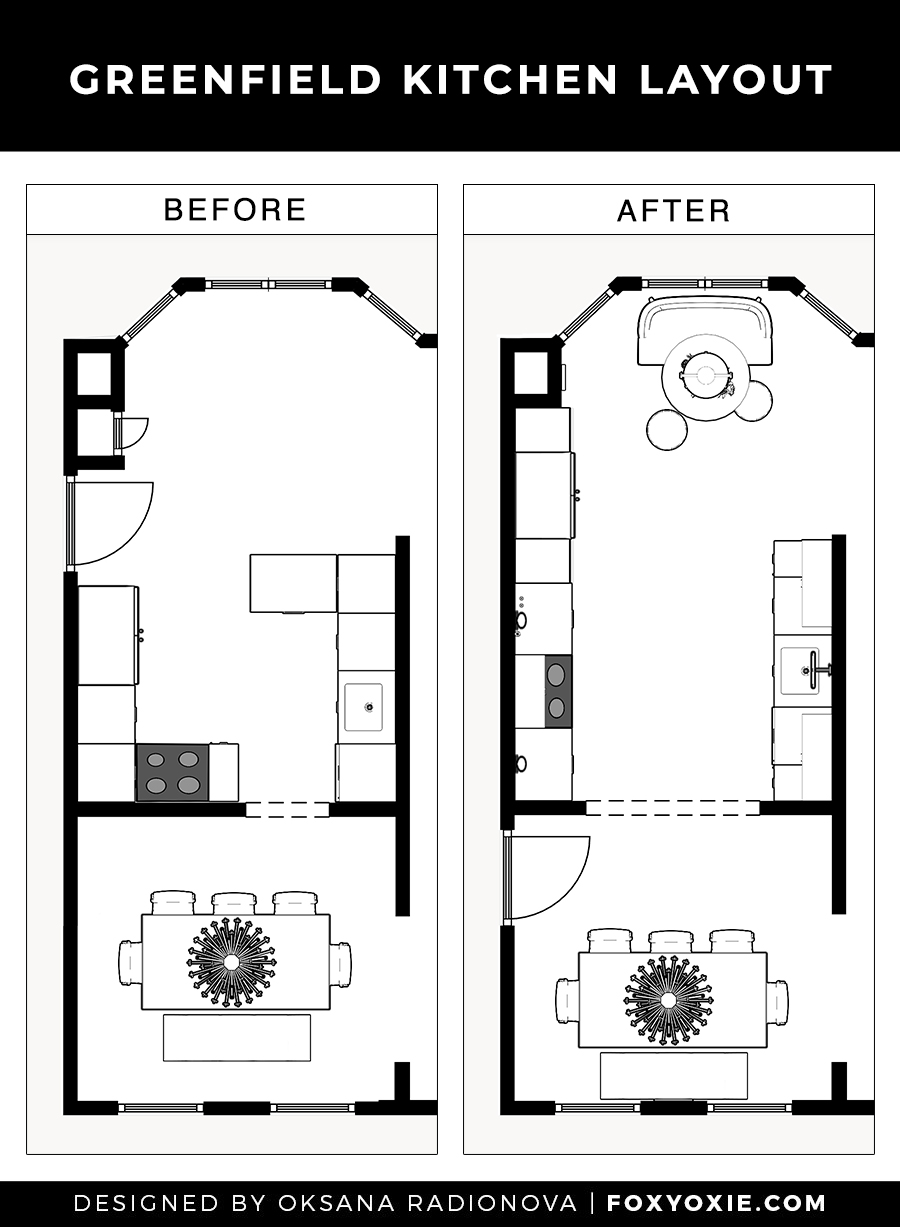 So, shall we knock down some walls?

To say that the original kitchen was the size of a postage stamp would be doing a disservice to postage stamps. Seriously, have you ever seen anything so small and dysfunctional?

If you recall the initial Greenfield tour I shared both here and on Instagram, I had grand plans for this space. On our first walk-through, I imagined doing away with the galley kitchen layout and demoing the wall separating the kitchen and living room, seen below, to install a large island. 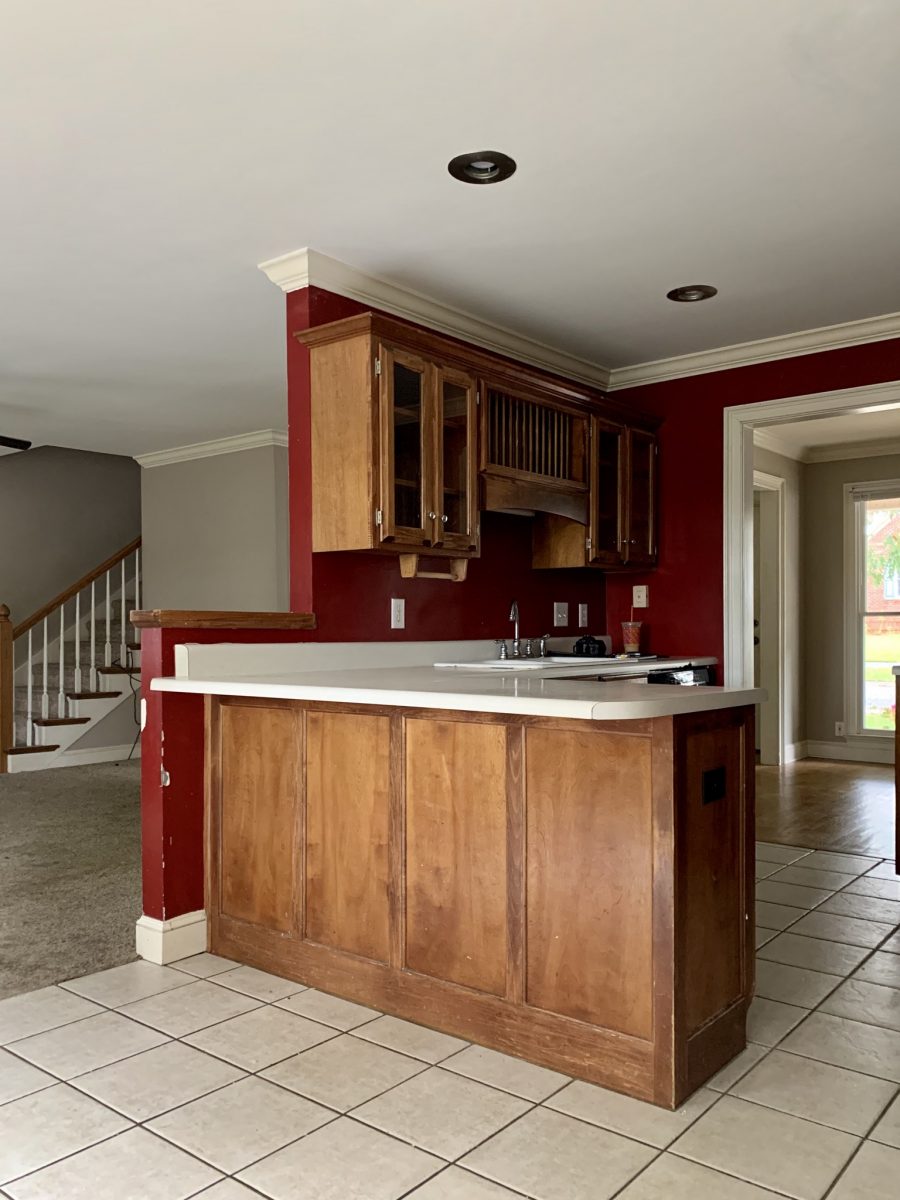 Come to find out, that wall was not only a load-bearing wall, but it also housed all of the plumbing that ran to the second floor. That included the master bathroom, kids’ bathroom, and the laundry. Fun, right?

In case all that was pure gibberish to you, a load-bearing wall is one of the earliest forms of construction in a home. It is a very important structural element of a house, because it holds the weight of everything above it – in our case, the second floor along with the roof.

But that wasn’t even the worst of it. Demoing a load-bearing is a challenge, sure. But it can be done! The issue, in our case, was the fact that all of the plumbing that ran to the second floor was located inside this very wall.

So, I was back to square one. Slowly and with much resistance, I embraced the galley kitchen layout. Some houses don’t lend themselves to open concept design. The Greenfield Remodel was such a house.

Not to worry, though! It didn’t take long for me to find another wall to knock down: the one separating the dining room and kitchen, seen directly below. Again, my aim was to open up the space a bit, to make it feel more connected with the rest of the house, increase natural light, and improve traffic flow. 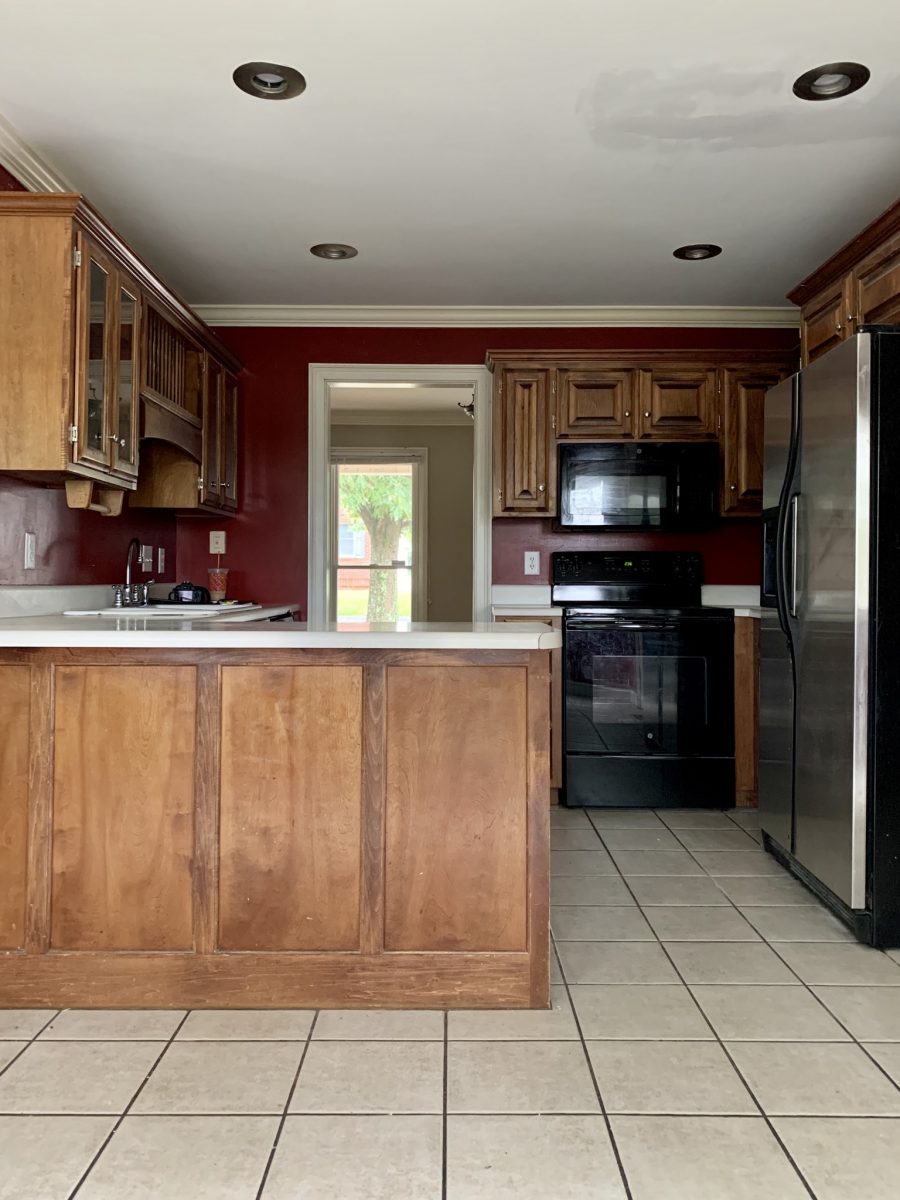 Later in the design process, I landed on the idea of simply widening the doorway rather than opening up that entire wall. Even in an open concept floorplan there should be a distinct indication of where one space ends and another begins. This extra-wide doorway was going to do just that; plus, it created a beautiful moment of perfect symmetry.

Speaking of traffic flow, the peninsula had to go.

Sometimes a peninsula can be incredibly useful in a small space, as was the case in our Strelkov Bungalow. Other times, it is very intrusive, making the kitchen layout feel maze-like, cramped, and claustrophobic.

The new layout created a wider, hazard-free walkway, hence better traffic flow. Even if the refrigerator, oven, or dishwasher are open, there is still more than enough space to walk through.

What about functional storage?

Another concern in the original layout was the lack of space, or storage. Widening the doorway to the dining room didn’t exactly help, either. Although that corner between the oven and fridge, seen below, was not exactly functional, it was storage space nonetheless. 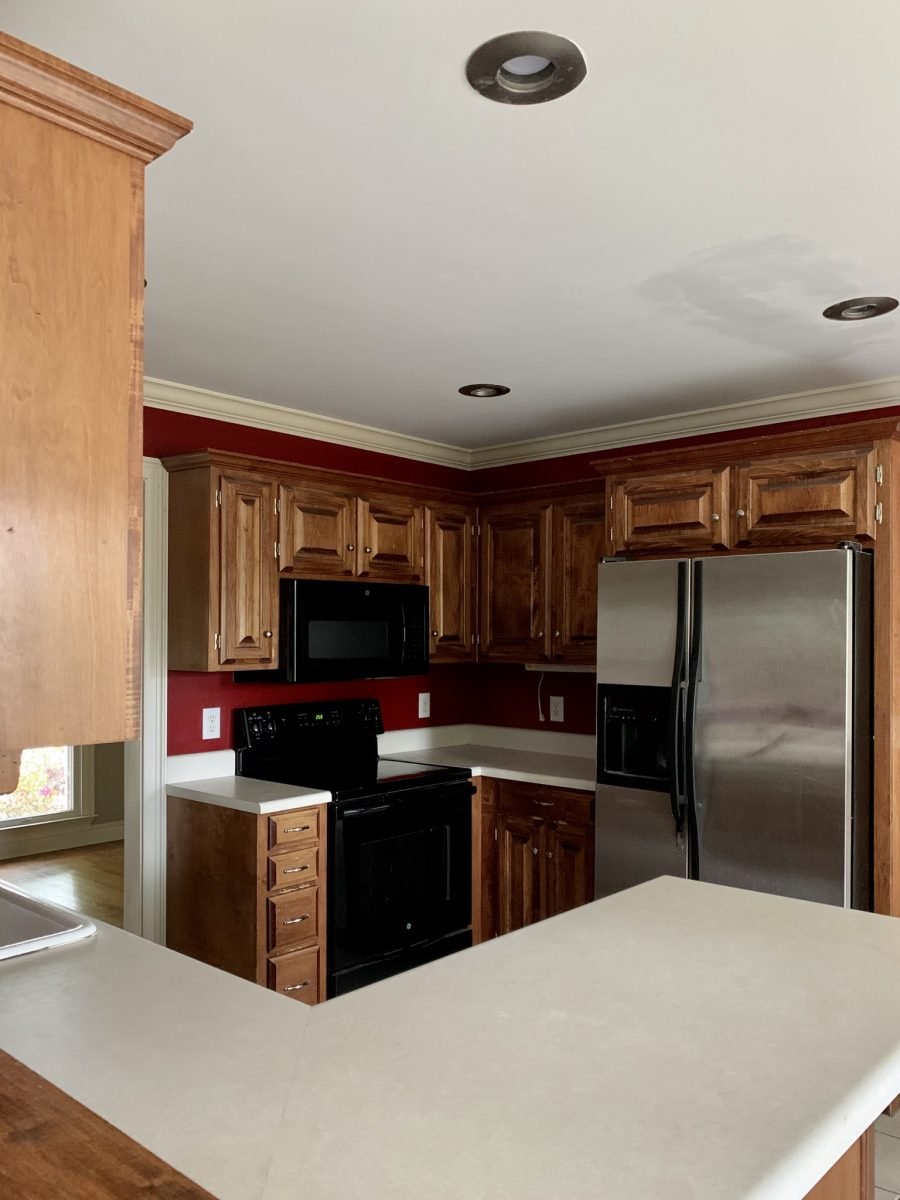 There was also a small built-in pantry closet, but it was quite possibly the world’s smallest pantry – only about 18″ of space. To complicate matters even further, the door to the garage was smack dab in the center of the kitchen, which really limited my options for expansion. 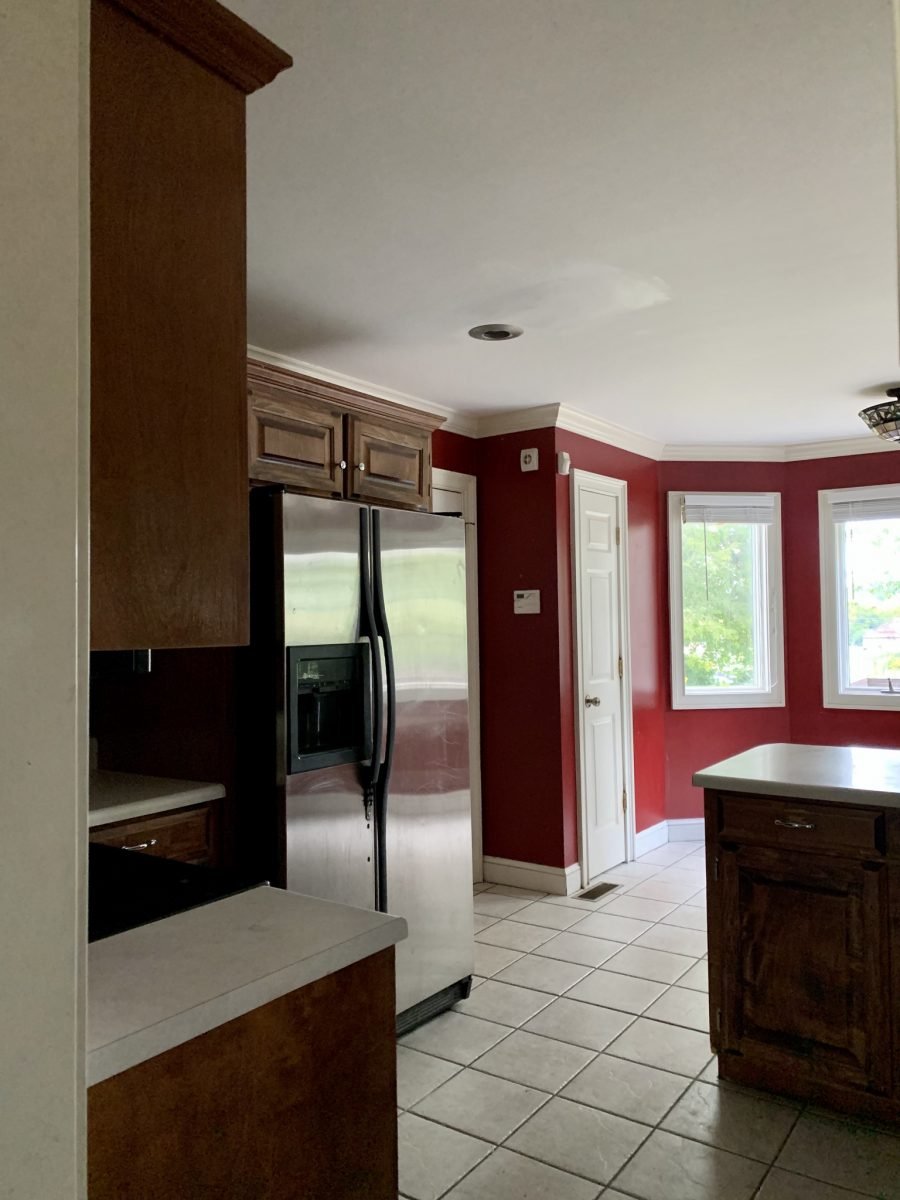 That’s when I had the idea to move the garage doors into the dining room. I know the idea is controversial, but hear me out.

Had we left it a formal, separate dining room, moving the garage doors there would be out of the question. But because we opened the dining space up to the kitchen, it made the dining area more casual and less formal.

In an ideal case scenario, a mudroom would separate the garage entrance from the rest of the living space. But that simply wasn’t an option in this house. Instead, my solution is to establish a mudroom situation in the garage right outside the dining room, with a place to hang coats and put away shoes before entering the house.

Furthermore, instead of centering the dining table and overhead chandelier in the middle of the room, I plan to move them closer to the windows at the front of the house, which will leave an extra-wide walkway from the garage doors to the coat closet in the front hall. Grace Start from Jean Stoffer Design recently did the same reconfiguration to their dining room – which, of course, only solidified my decision.

Last but not least: the bay window debate.

I personally am not a fan of bay windows; at least I wasn’t prior to this project!

I’ve considered them a waste of space, and unless they span the entire room or are somehow worked into a bigger design plan, they often feel like an afterthought. My initial idea of making the bay window feel more intentional was to add a built-in breakfast bench. Ultimately, I decided to opt for a freestanding breakfast nook simply for the fact that when we sell this house, I can take the furniture with me.

What I especially love about the eat-in breakfast nook concept is that it opens up a world of possibilities of how it can be used. It could function as a home office area, a homework area, a crafting area, and more! The biggest advantage of creating a multi-use space like this is that it helps blur the lines of daily activities and effortlessly connects the family living there.

I’ve already ordered all the pieces for the breakfast nook and am so excited to show you what I have planned. I think it’ll turn out even better than I initially imagined. Stay tuned for a blog post on that, along with a roundup of affordable banquette and settee options!

In conclusion, this particular kitchen renovation has been quite the challenge – but aren’t they all? I’ve spent the last eight months designing and re-designing everything 100 times over and over – and nothing felt quite right. Then I finally landed on this layout. Seeing it all come together now erases any leftover doubts I might’ve had. I cannot explain the amazing feeling of seeing the potential of a room and making that vision come to life; it’s so invigorating!

I hope you’ve learned something new today, or at the very least, found my design thought process interesting. Check out my “Kitchen Reno” highlight on Instagram for more progress updates!

I’ll be back soon with the kitchen design plans, where you’ll be able to see all styles, colors, finishes, etc. Plus, stay tuned for the breakfast nook plans!

Looking for more kitchen inspiration? Check out these posts: