Well, it's officially week 2 of the One Room Challenge, and I'm feeling all sorts of overwhelmed. Last week I shared "BEFORE" photos of the living room and the progress we made since first purchasing the bungalow. Today I'll be sharing the living room inspiration, plus lots of juicy details from the design plan.

Let's assess the situation, shall we?

I was recently notified that the Chesterfield sofa I ordered back in September (before the ORC even began) won't be arriving until end of October.

So there's that to worry about.

Will it arrive in time for the room unveil on November 10? There's no telling, but I sure do hope so! 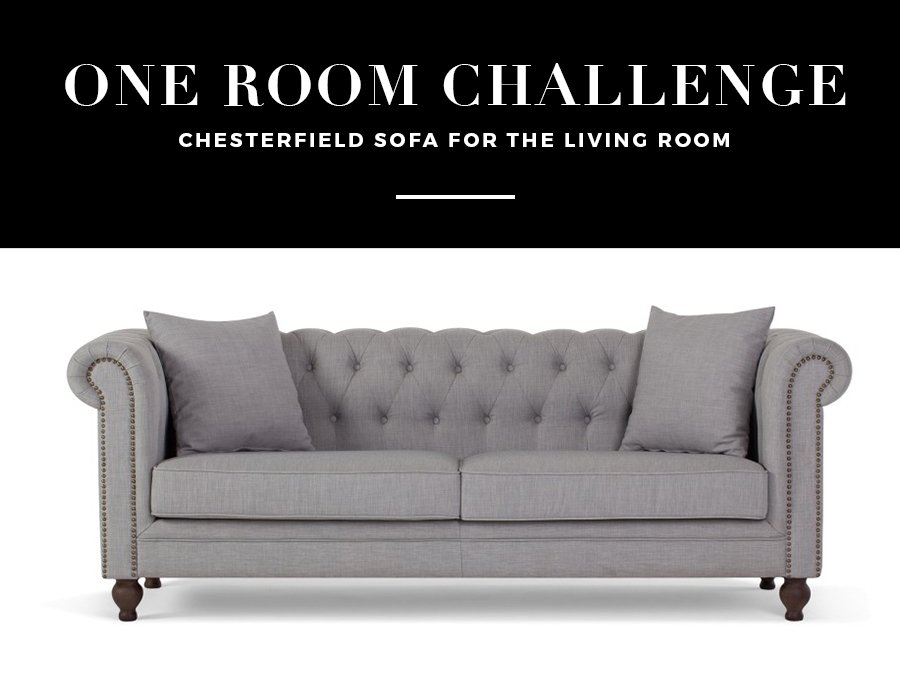 To complicate matters further, we're heading out on a last-minute, desperately-needed, week-long beach vacation on Friday evening – first one this year, by the way! Consider it a desperate attempt to replenish my creative juices, but what this brief hiatus means is that we'll have less than three weeks to finish the entire room once we return.

Are you feeling my anxiety yet?

The project that concerns me the most is the fireplace makeover, because as we've seen thus far, it's quite time consuming.

The fireplace remodel was initially started back in July, before I even knew I'd be participating in the ORC. We had hired a "professional" to build out the depth of the hearth in order to bring it up to code.

You'll understand why I'm using quotation marks in a second.

Some of you that have followed our renovation from the start weren't big fans of the idea to add onto the fireplace – and I totally get it, I do. But you see, the fireplace was originally part of the wall separating the dining room from the living room. We demoed that wall to create an open concept living space. Immediately, it was obvious that the fireplace was never meant to be free-standing or openly displayed. Thus, more brick had to be added onto the structure.

Mid-project, the so-called "professional" quit, and we were stuck with a total mess right in the center of the house. Hence, the quotation marks.

We've had the best of times with this renovation, and we've had the worst of times. The Fireplace Fiasco – as I've oh-so-lovingly nicknames it – was the latter.

For a while, we worked on the fireplace ourselves. Masonry work isn't difficult, per se, but lack of experience forced us to take our time with the smallest of tasks. My obsessive-compuslive nature wasn't helping, either.

Back in July I created a few Photoshop renderings to give readers an idea of what I had in mind as far as the makeover. We considered many options, and landed on the one below. We plan to paint the outside white and the hearth black for a contemporary aesthetic that is more in line with the rest of our house. 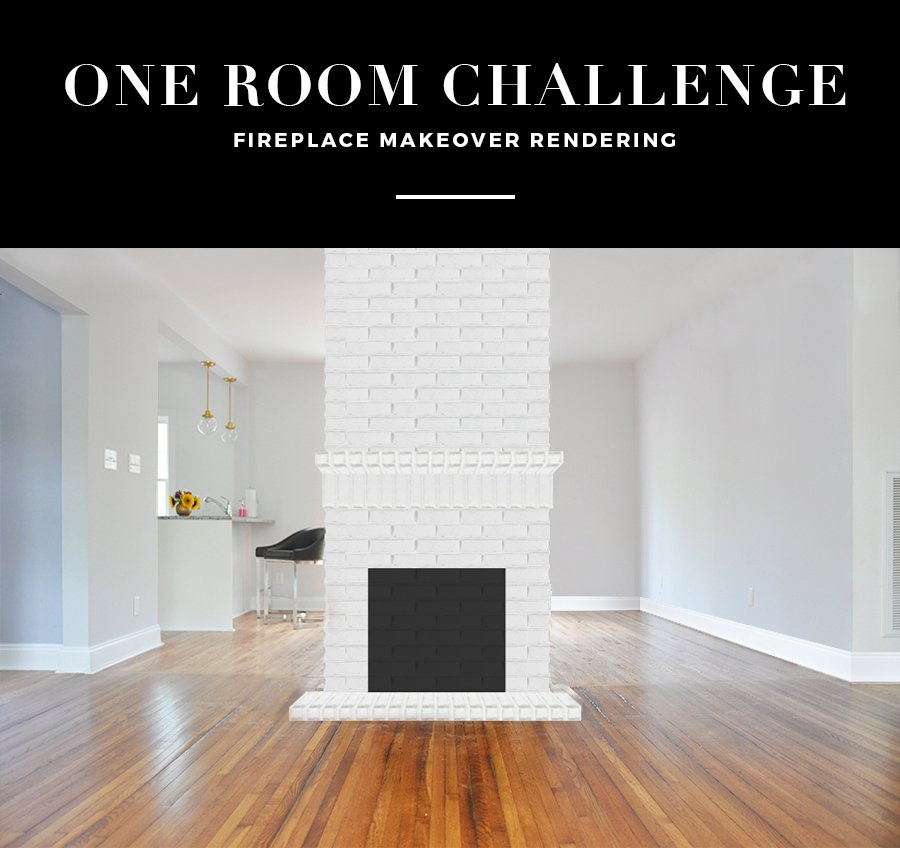 You can see the other fireplace designs we considered, along with the initial inspiration here:

As for the overall aesthetic of the living room, I had to reign in my expensive tastes. Vaulted ceilings, intricate Parisian moldings and floor-to-ceiling windows are simply not an option for our modestly sized home.

For days I scrolled through Pinterest like a madwoman, looking for more attainable ideas. Check out the following drool-worthy spaces I discovered. 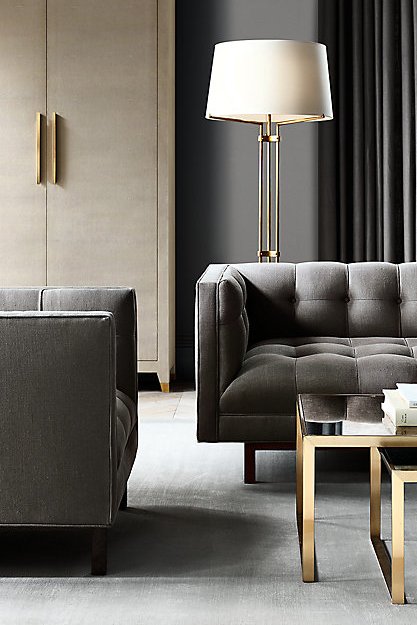 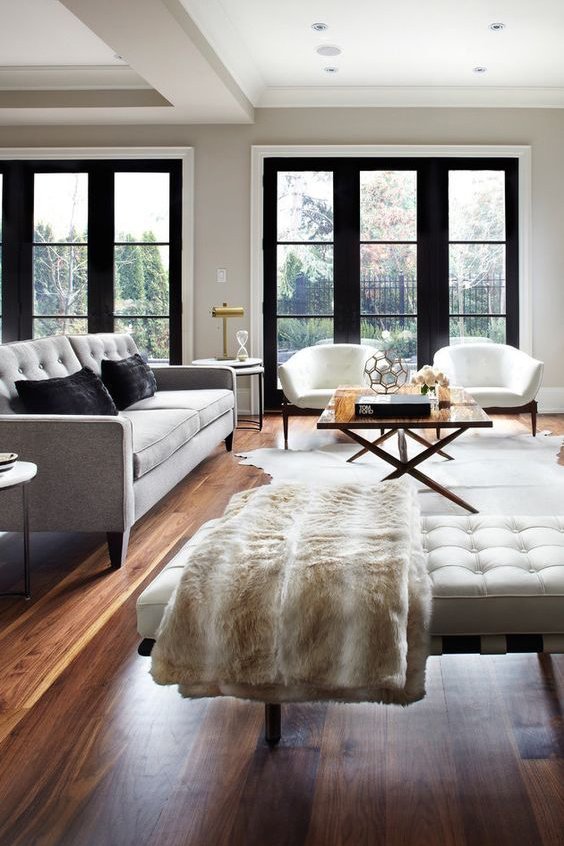 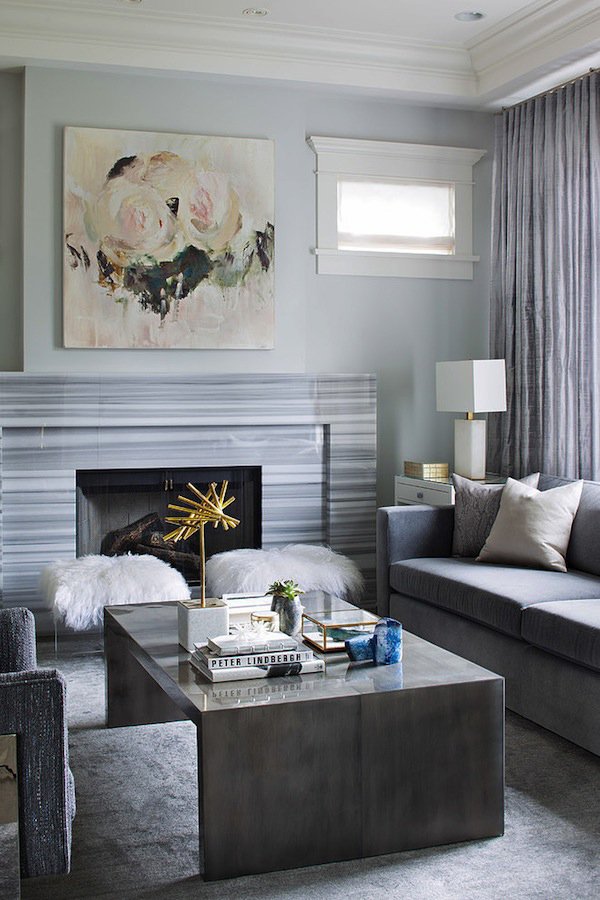 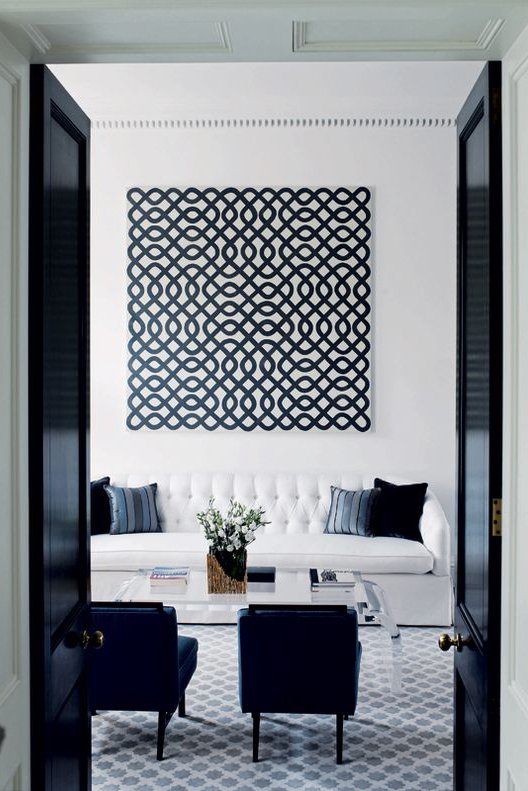 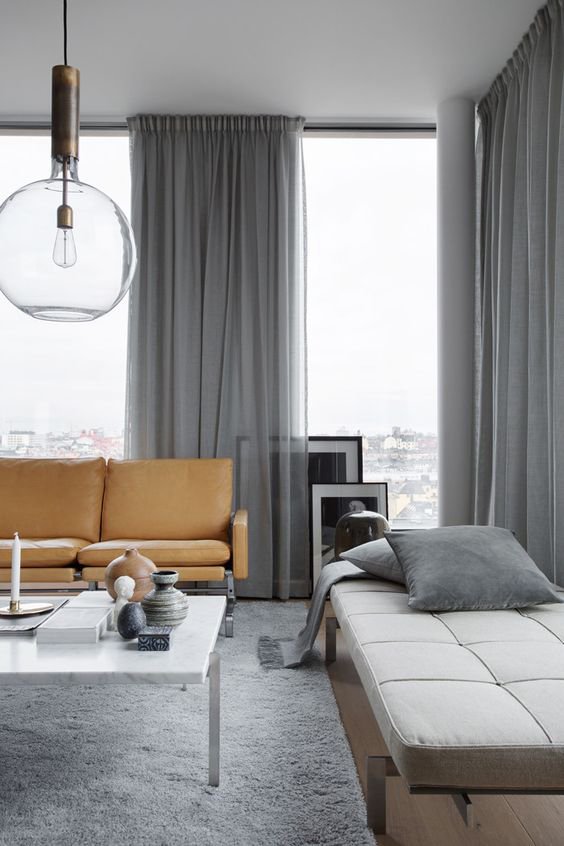 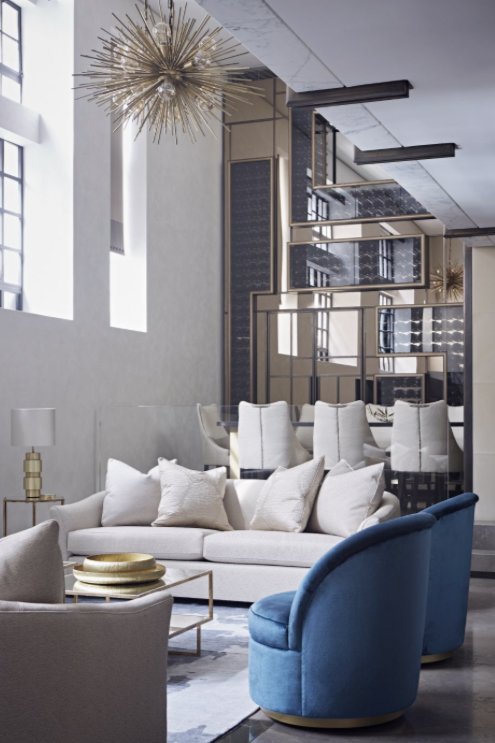 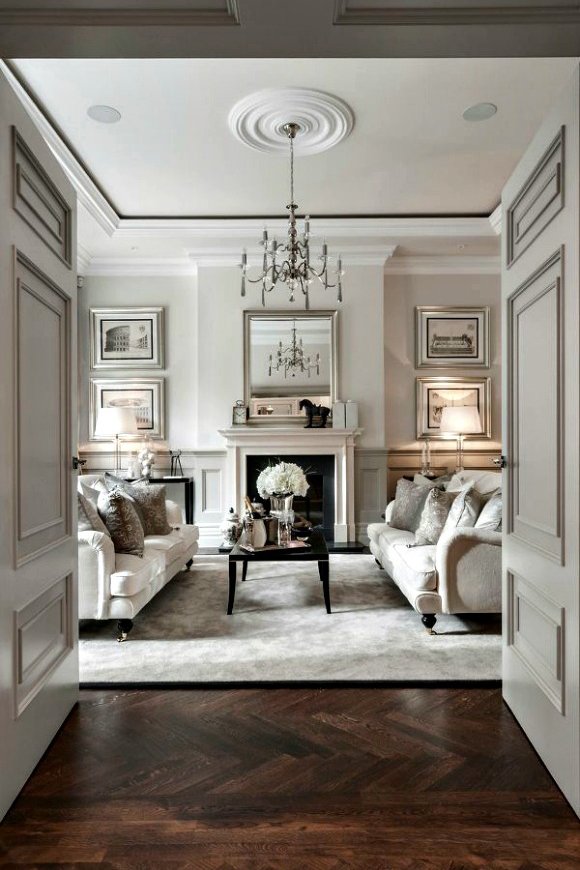 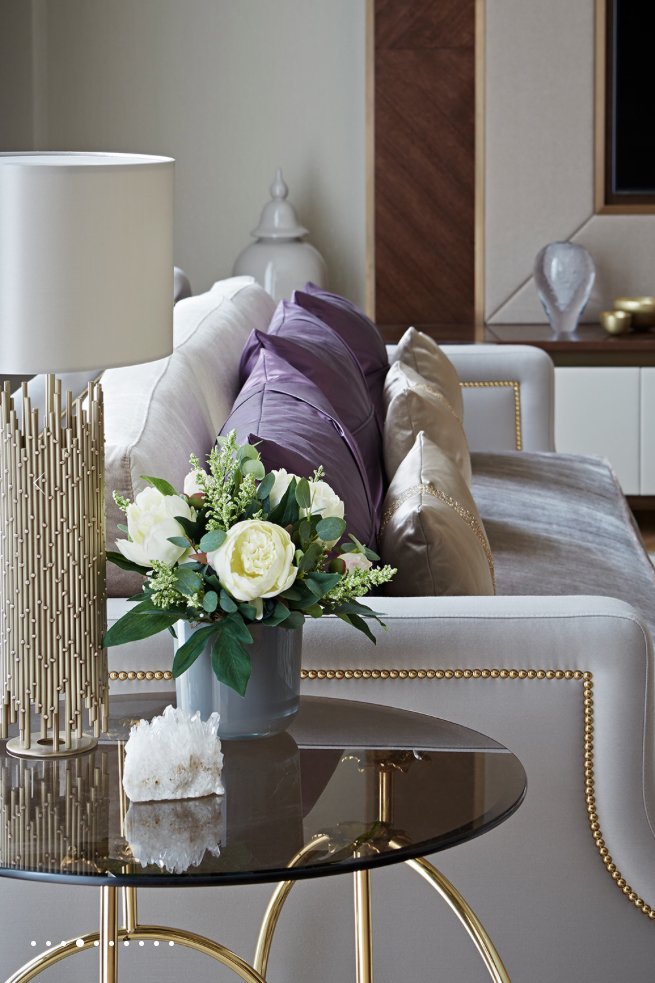 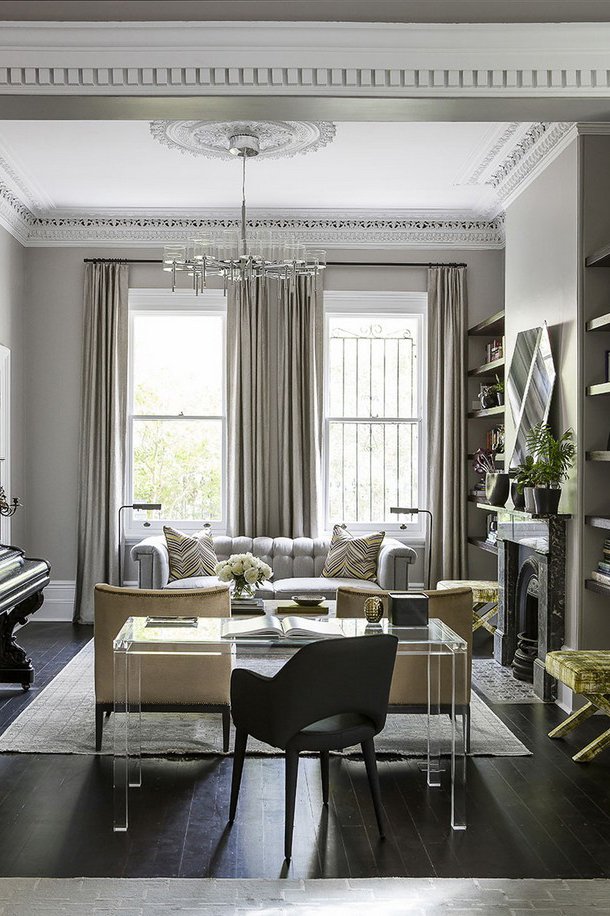 One recurring theme in these photos is a color palette of sophisticated neutrals. You see lots of white, gray, black, blush and beige, punctuated by pops of chrome and brass.

I plan to add lots of texture to keep the neutral colors from looking too flat and uninteresting. I want to play up the juxtaposition of opposing styles: feminine and masculine, soft and edgy, modern and traditional.

Other details to note are tufted furniture, luxurious fabrics, clean lines, texture and plenty of metallics to keep my interest.

Beyond the aesthetics of the room, one of my main goals is to make the space feel relaxed. I don't ever want guests to feel like they can't touch this, sit here or stand there. That totally defeats the purpose of owning and decorating a home.

I want family and friends to feel like they can pop by for a cup of coffee – and feel comfortable to stay far past dinnertime.

Before I get too philosophical, let's look at the living room design plan, shall we?

Just how will these pieces play together, you ask?

Feast your eyes on everyone's favorite part of this entire blog post: 3D room renderings! If only real-life decorating was as easy as it is in Photoshop, am I right? 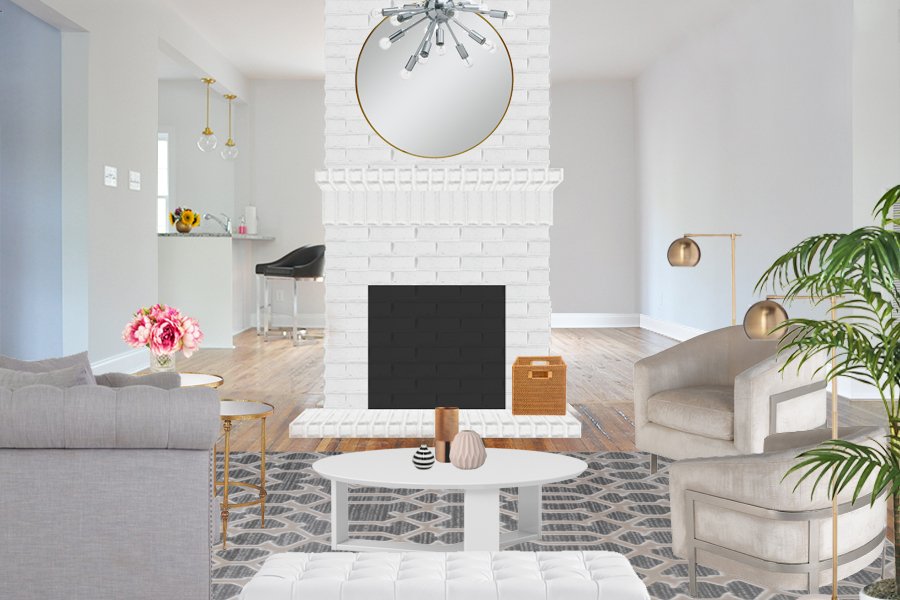 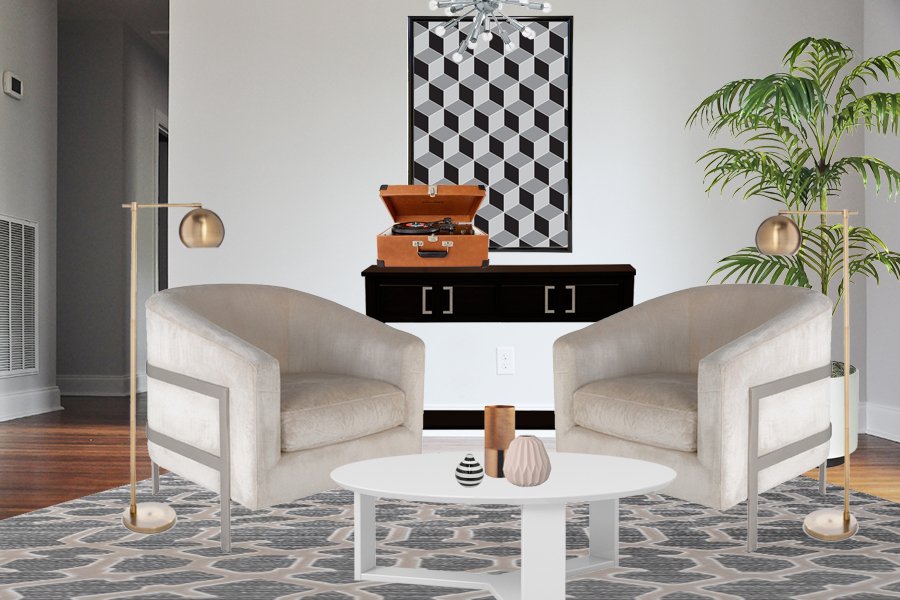 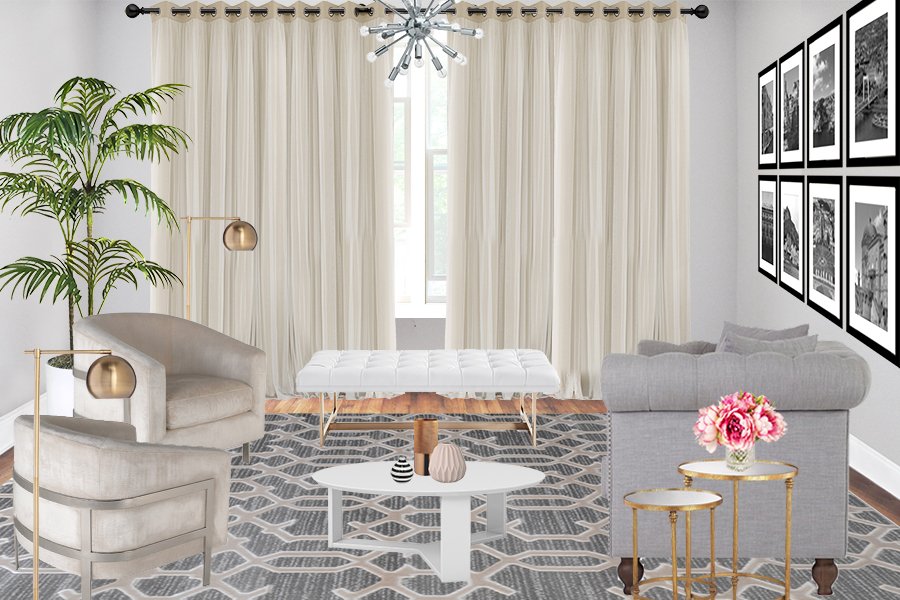 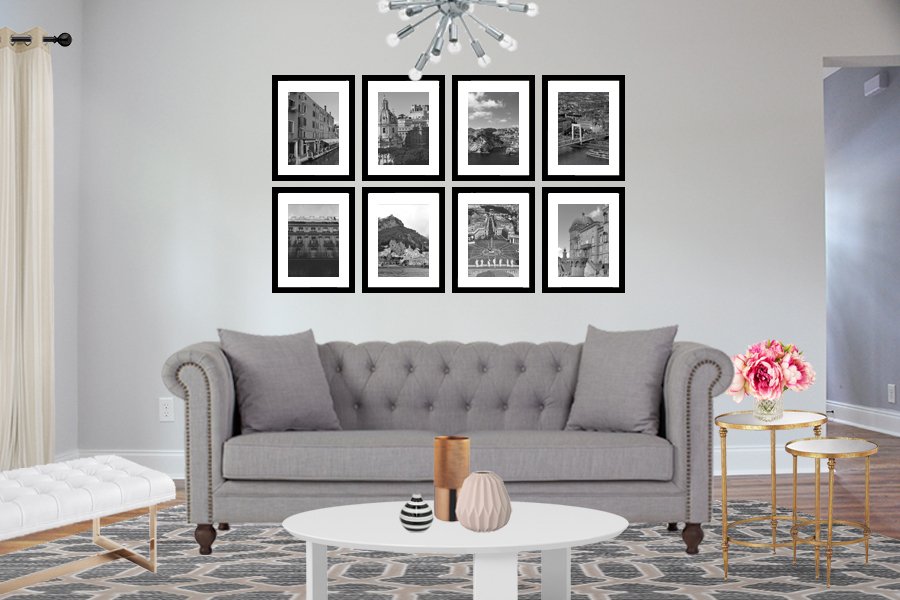 I'm over-the-moon excited to be working with framed & matted on designing a custom gallery wall that will hang on the wall behind the sofa.

For those who may be new to FOXYOXIE.com, a few years ago the husband and I quit our jobs, sold our belongings and went on a trip-of-a-lifetime across Europe. During the course of three months, we took thousands and thousands of photos – and despite the trip being completely life-altering, I had yet to think of a way to display some of our favorite destinations around our home as a reminder of the best three months of our life.

What's more, you can use the customization tool on the framed & matted website to upload your artwork and see how it'll look with your custom frame. The company will even send you a FREE tape measurer to help get you started on your design!

For our gallery walI've chosen to frame Paris, Rome, Venice, Dubrovnik, Budapest, Amalfi and Sintra – and still debating between Cinque Terre and Vienna for the eight frame.

What are some of your favorite European destinations? 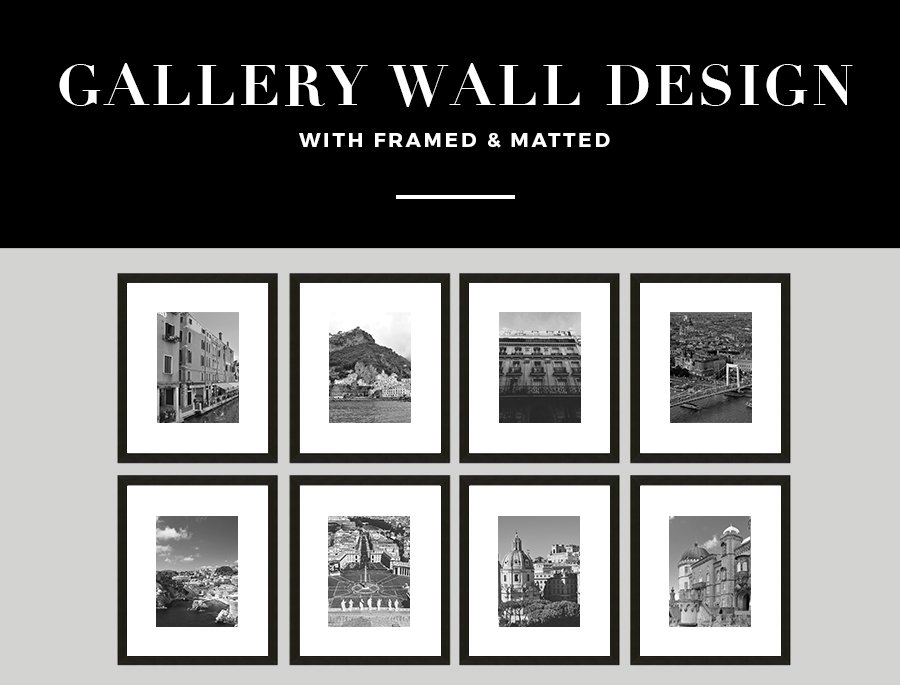 Speaking of travel, I'm off to pack for that beach vacation I mentioned earlier. After 15 months of nonstop renovation decisions, this girl needs a break!

But just because I'll be frolicking on the beach next Thursday doesn't mean that you have to miss out on the weekly ORC excitement. I worked extra hard this week to create two weeks' worth of all-new content, so don't forget to tune in next Thursday. I'll be sharing some of the purchased items that have begun arriving, plus I will show you how I'm shopping our own house to meet the November 10 deadline!

And now I'd love to hear from you! What do you think of the plan so far? Any of the pieces from the design plan catch your eye? Do you have any suggestions for what I could do differently? I’d love some feedback!

Don't Want to Miss the Next Update?

Sign up for the FOXY OXIE newsletter to be notified of new posts. You can also follow the fun on Instagram and Snapchat, where I’m sharing fun unboxing experiences and sneak peeks of the new furniture and decor – although next week, let's be honest, I'll likely be sharing our vacation instead.

To catch up on what we’ve renovated so far, browse the full “Our Bungalow Renovation” series. To see the other bloggers' transformations, pop over to the “One Room Challenge” linkup.

Heads up: there are more than 200 of us bloggers taking part this time around, so you're bound to find a project that appeals to you!

Huge thank you to sponsors PureModern for gifting us the "Sol" chandelier and to framed & matted for providing the custom frames for this project.

About the One Room Challenge

The One Room Challenge (ORC) is a wildly anticipated design event hosted by Calling It Home in partnership with House Beautiful.

Twice a year, 20 featured bloggers along with hundreds of guest participants are challenged to transform any room they so choose, but they must complete the entire project in six weeks.