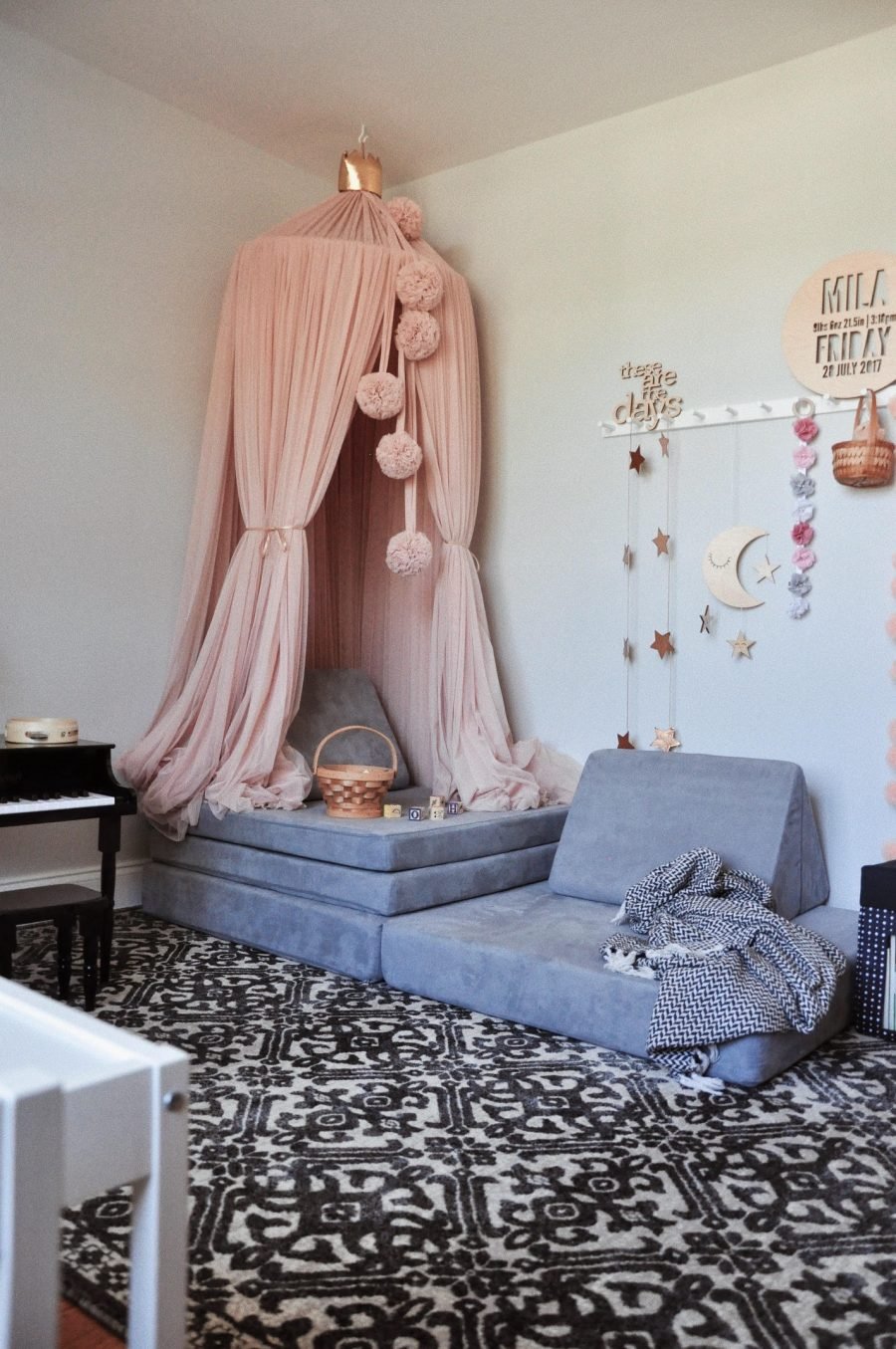 Today I’m sharing our girls’ playroom tour, the Montessori ideas that influenced its design, plus lots of advice for maximizing your own play space.

I first discovered Montessori teachings while pregnant with our Mila, who is now almost three years old. That’s also about as long as I’ve been drafting this article – but that’s a story for a different day.

I’m quite the perfectionist by nature (not like I ever mentioned that before…ha!). So the emphasis on order and simplicity was what initially piqued my interest in the Montessori method. But I quickly discovered that it was about so much more than aesthetics.

So, what exactly is Montessori? More specifically, why have I let it influence our playroom design?

Montessori refers to an intentional, child-centered way of teaching little ones – a way that is backed by the science of childhood development. One of the biggest differences between traditional education and the Montessori method is that the first focuses on regurgitating information. The latter, however, recognizes and nurtures children’s innate desire for learning.

I by no means follow all Montessori principles. But I do agree with one in particular: By setting up a child’s environment to encourage curiosity and age-appropriate independence, we set them up for success. After integrating this and other Montessori ideas into our playroom, I noticed the remarkable effect it had on Mila’s independence from as early as one year old – which only reaffirmed my beliefs.

This playroom was the very last finished space in our bungalow. Although that chapter of our lives feels like a lifetime ago, we’ve continued to implement the same principles in our current home, too. Both of our girls (aged 2.5 and 1) are great at independent play. While there are several factors that contribute to this, I firmly believe that the Montessori method is one of them.

Today’s post combines two of my favorite topics: mothering and design. It’s packed with lots of helpful info (in case the length of this article wasn’t enough of an indication…) Now, let’s take a look around! 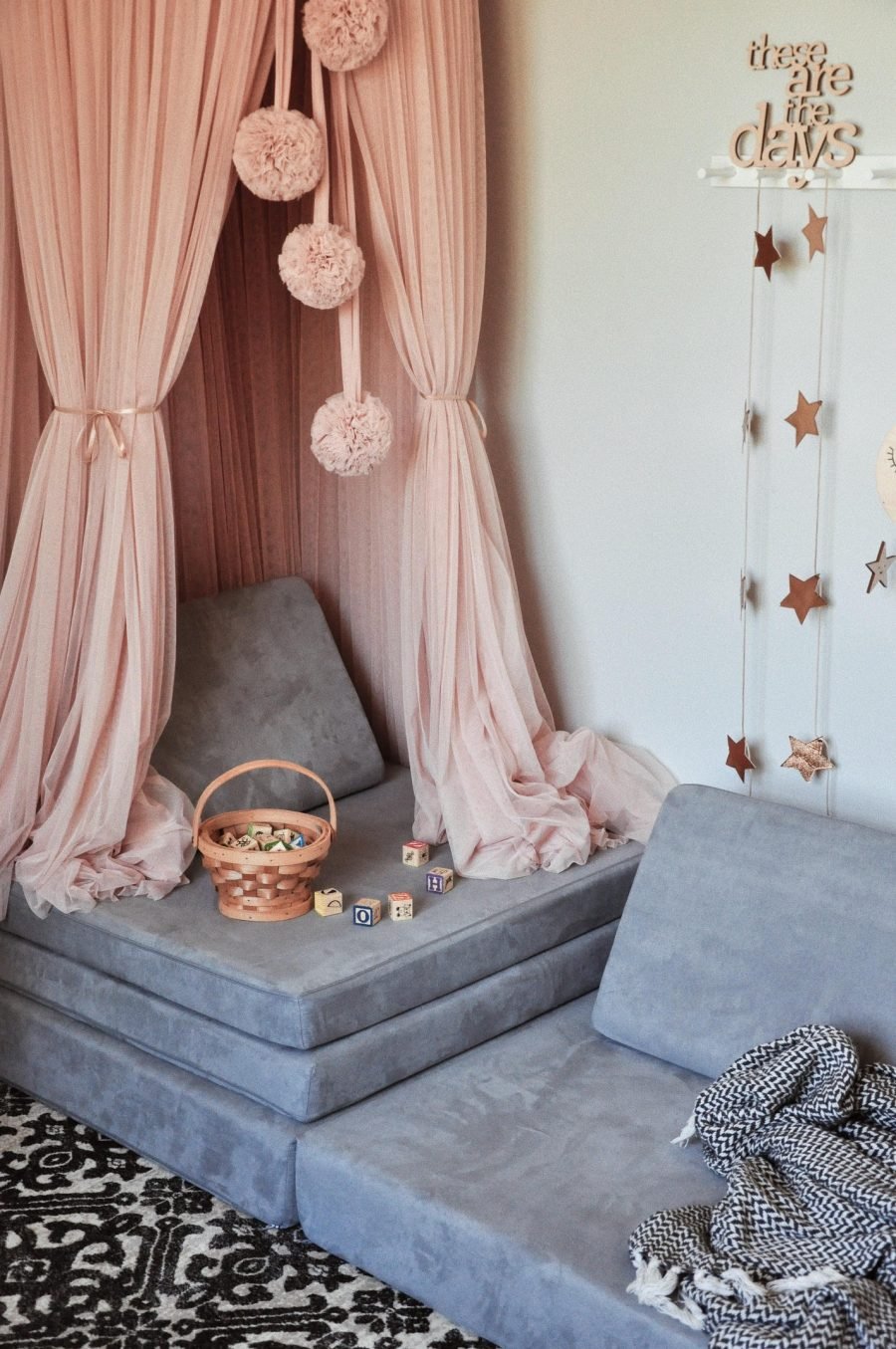 When designing a playroom, most people choose loud, primary colors. Add in toys scattered as far as the eye can see, and you’ve got a chaotic, overstimulating mess. Just typing out that description gives me anxiety, ha!

Montessori playrooms are a lot more toned down. We’ve been conditioned to associate playrooms with primary colors, but neutral colors are scientifically proven to be more effective at fostering concentration. So, if you’ve ever wondered why your little one seems disinterested in the many, many toys in his or her room and will only play for a couple minutes – one of the factors to consider is the color palette.

Of all the Montessori ideas, the value placed on simplicity is perhaps most appealing to me. I personally cannot function in aesthetically loud environments and find them mentally and emotionally exhausting. Just look at the color palette of our house: white, black and gray with a pop of brass for good measure.

If colorful surroundings are overstimulating for some adults, think how much worse they are for children and their young, developing minds. Visually loud surroundings result in emotional chaos, distraction and overstimulation much faster than neutral spaces. 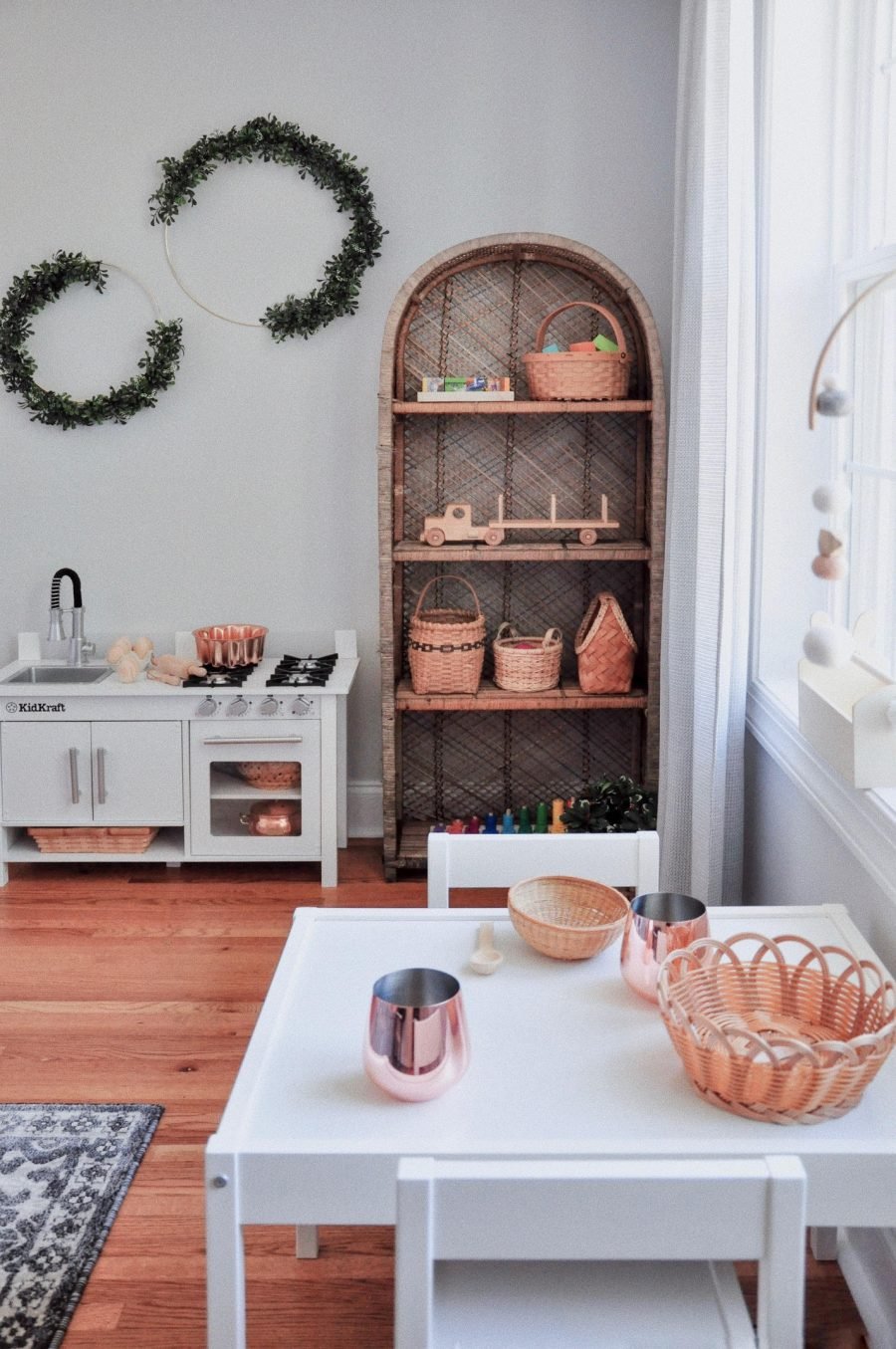 You’ve likely come across the idea that children thrive on order and routine. Have you ever wondered why?

Maria Montessori, the Italian doctor who developed the Montessori method, wrote a lot about children’s “sensitive periods.” A sensitive period refers to a developmental phase in a child’s life when he or she is especially open to a specific method of learning. Children have a sensitive period for order from birth until about age five. That explains their need for routine, predictability and repetition.

Montessori playrooms support this need by designating a specific location for every toy. Of course, it’s impossible to do this if your playroom has hundreds of toys, which brings me to my next point: Children don’t need nearly as many toys as we make available. In fact, less is better. We as parents mistakenly think that if only we offer enough entertainment, they’ll play longer. But the opposite is actually true: Kids play more when there’s less to play with.

Observe what toys interest your child most, and put the rest away into storage. Most Montessori guidebooks suggest making 8-10 toys or activities available at one time. That’s significantly less than what you’ll find in most playrooms! When certain toys remain untouched for an extended time, rotate them out with “new” toys from the storage. Similarly, if your child shows interest in, say, puzzles, then add more puzzles into the next rotation.

Display toys with just a couple on each shelf and plenty of space between each one. Ideally, activities like puzzles or stacking rings should be taken apart with the loose objects placed in a basket to the left of the base. This is another way of encouraging independent play, because an unfinished activity invites the child to complete the work.

If you want to take organization a step further, arrange the toys or activities on any given shelf from left to right, with the easiest being on the left and most difficult being on the right. The left-to-right progression is good preparation for reading and writing. 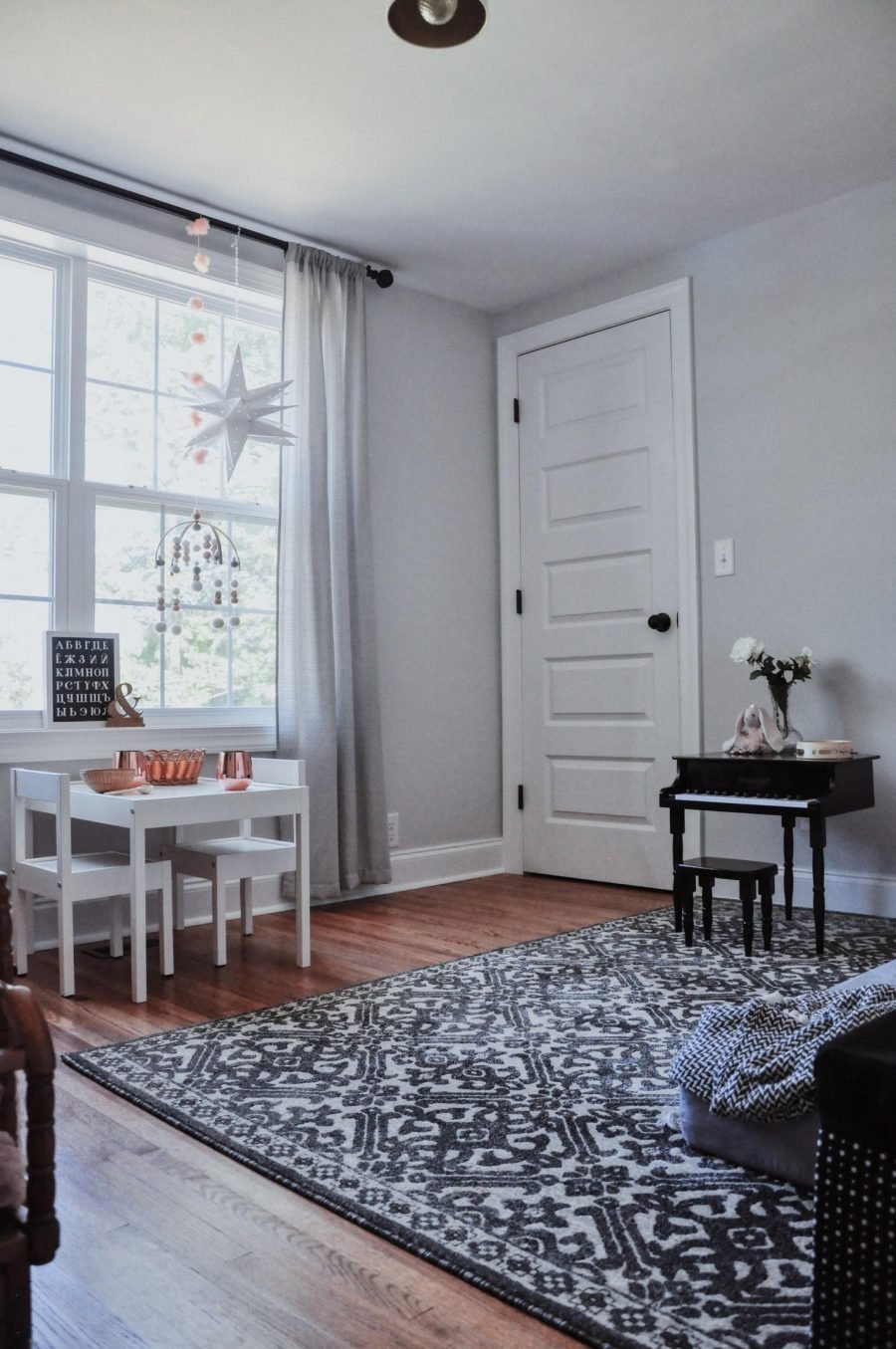 When designing a playroom, we tend to fill it with activity stations – i.e. tables, kitchenettes, market stands, easels, playhouses, train tables, and so on. We keep adding play stations until there’s little space to actually move around. Not only does this tendency go against Montessori principles of simplicity and order, it also hinders a child’s need for movement.

Movement is essential to a child’s development. Toddlers especially have a natural, developmentally-appropriate desire to climb, jump, and otherwise test their physical abilities – and will do so on just about any piece of furniture around the house.

By designating the playroom (or a part of it) as a “yes” space, you’re catering to this very important developmental need while setting a healthy boundary of no horseplay in the rest of the house. A “yes” space is a room or designated space where a child can move freely without the fear of hurting themselves or being reprimanded.

If space allows, leave the center of your playroom empty, so your little ones can move around freely, dance and develop their gross motor skills. If your playroom is limited in space like ours, incorporate movement-based toys instead of stationary ones. I highly recommend the Nugget Comfort, which is a multi-purpose play couch that not only serves as seating but also configures into a dozen different shapes for active play. We use ours to build forts, slides, obstacle courses and so much more! It’s our girls’ designated “yes” space, where they’re free to climb, jump, slide, roll, etc. 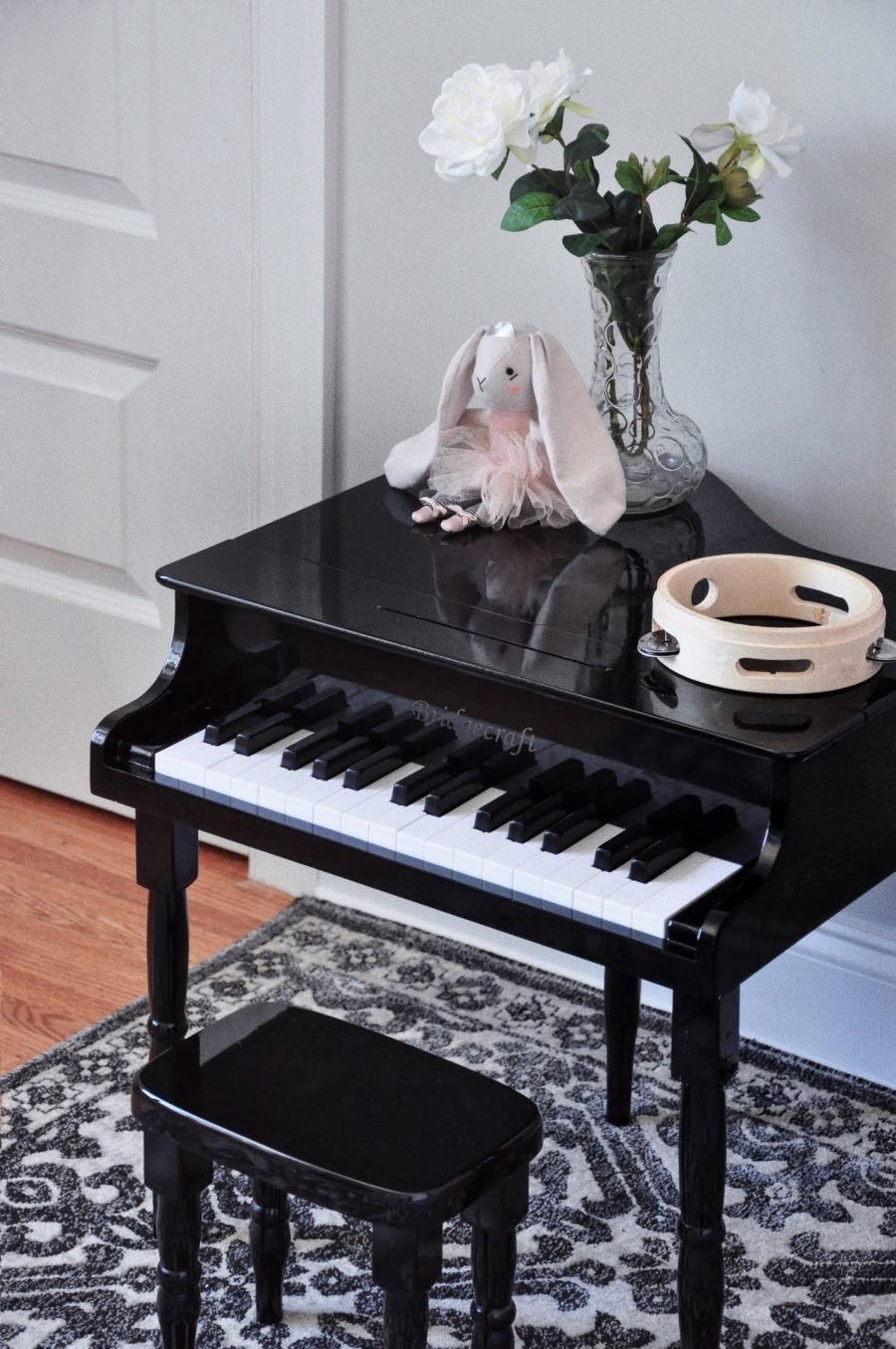 One of the biggest goals in a Montessori playroom is to help little ones become more autonomous. This, in turn, translates into less time we as parents spend actively entertaining them and afterwards cleaning after them.

Children are on an innate quest for increased independence; it’s a natural and good desire. Using these ideas in your child’s playroom will mean that they won’t need to rely on you to lift them into a chair, fetch hard-to-reach toys for them, or follow them around to wipe every mess. Instead, you’ve set their environment up for successful self-directed, independent play. 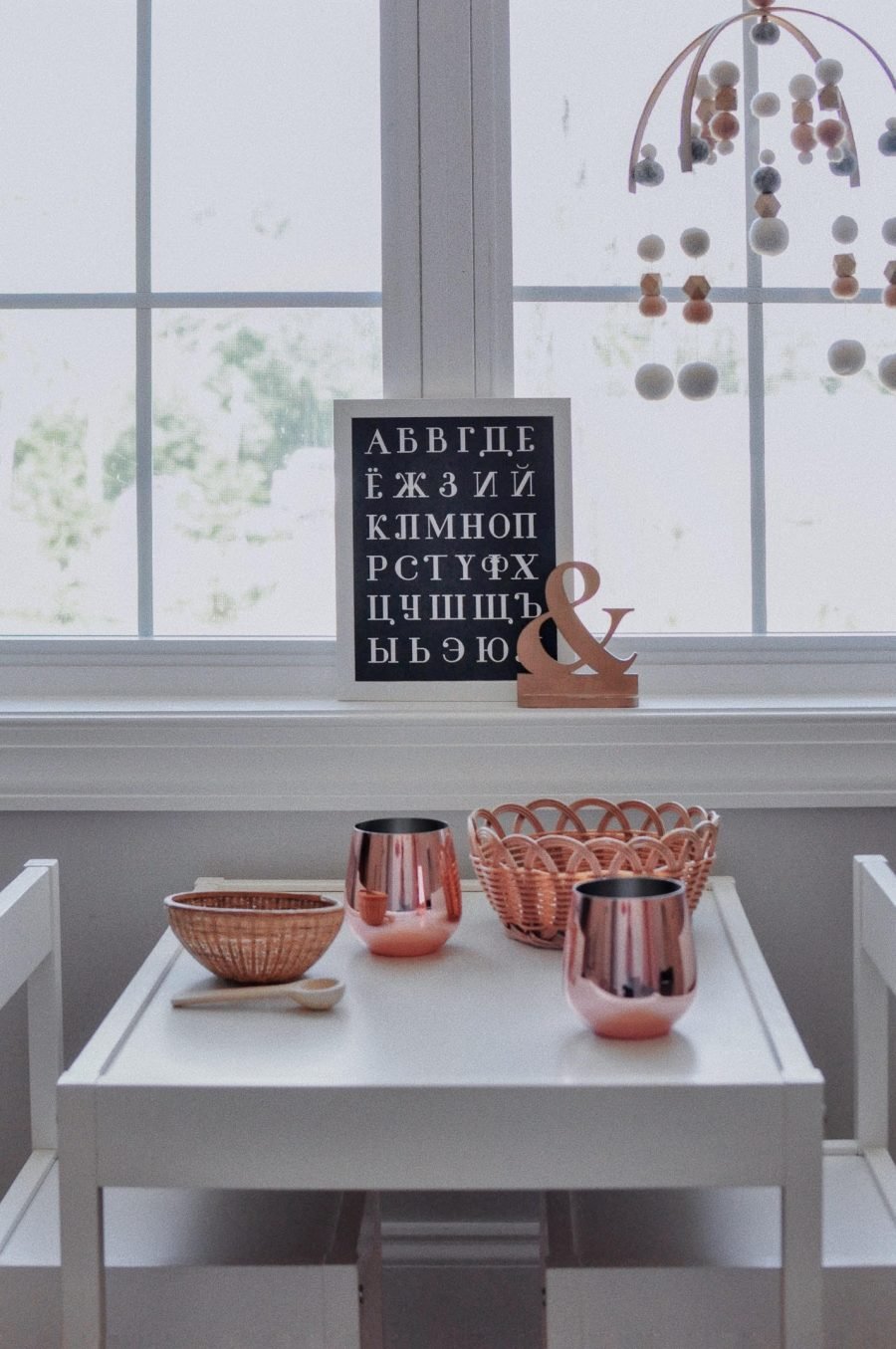 The benefits of using natural materials in a playroom are many. They last longer, are more aesthetically pleasing, environmentally friendly, etc. But handmade wooden furniture and toys tend to have higher price points, too, which makes them less accessible.

Other ways to incorporate nature into your playroom: 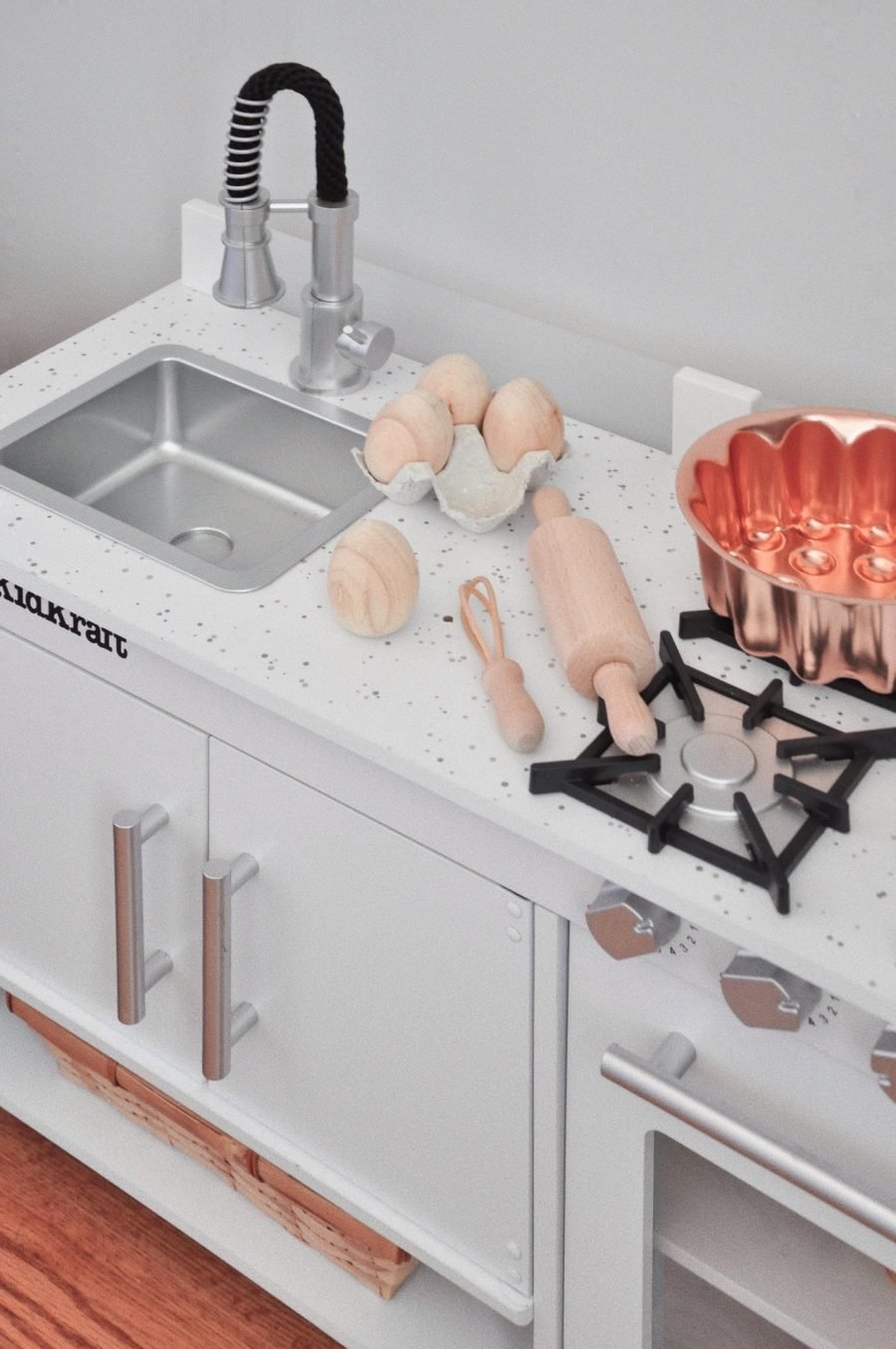 I briefly mentioned toys earlier in the post. The reason wooden toys are so prevalent in Montessori environments is not just because they’re made from natural materials. The more important detail to note is that most wooden toys are open-ended. They aim to engage your child rather than entertain. You’ll never find electronic toys in a true Montessori playroom.

An open-ended toy is one that can be played with in many different ways. It doesn’t have one set outcome, but instead it nurtures your child’s imagination. A Montessori toy is one that stimulates curiosity by encouraging children to experiment. Examples of open-ended toys include: blocks, magnetic tiles, realistic toy animals, play silks, sorting and stacking toys, playdough, etc.

Also try to have a mix of toys with varying degrees of difficulty for when your child needs a challenge. Check out the ultimate list of Montessori activities for babies, toddlers and preschoolers from The Montessori Notebook. 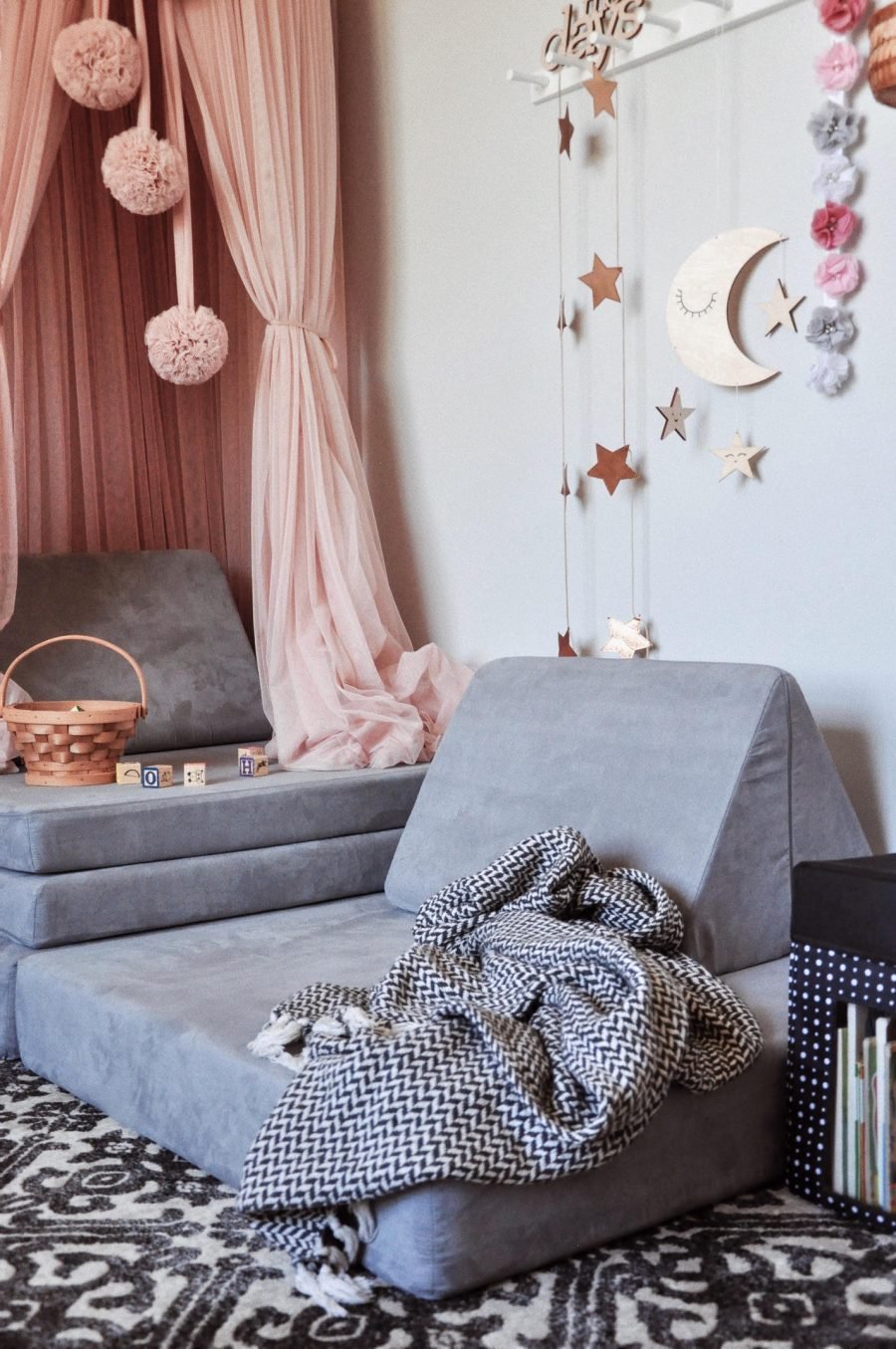 Last but not least, when designing a Montessori playroom it’s a good idea to include a quiet, cozy space – somewhere for your child to rest and recover from stimulation. It could be a big floor cushion, or a bean bag, or a child-sized rocking chair. Just as children need plenty of space for movement and big energy, they need quiet spaces, too.

Our quiet resting space is the combination of a canopy and the Nugget sofa; I’ll often find our girls reading here, so I’ve moved their box of books right next to the Nugget for easy access.

Now, I realize that was a lot of information. But Montessori doesn’t have to be an all-or-nothing life change! You can pick and choose the ideas that work for you and your children!

Must-Haves for a Cozy Nook

I’d love to hear your thoughts on this topic. Did you find it helpful? Any questions about playroom design or the Montessori method?

Raise your hand if you grew up with scriptures dis

Can you believe more than eight months have passed since I last shared about our Greystone House?! Even then, it was just the initial […]

END_OF_DOCUMENT_TOKEN_TO_BE_REPLACED

Raise your hand if you grew up with scriptures displayed around your house as artwork. I know I did – both in Ukraine and […]